This flourishing band from Switzerland is back with more of their top-of-the-line Metalcore to tell you some of their harshest tales of reality. 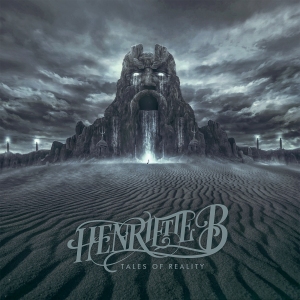 In case you’ve been following The Headbanging Moose for a considerable period of time, you might remember our review for the 2014 EP Red Dawn Of Humanity, by Swiss Metalcore/Hardcore act Henriette B (and if you’re new to the band you’ll find out why they have such a distinct band name by reading that review HERE). Now, almost two years after Red Dawn Of Humanity became a reality in the world of Metalcore, this five-piece band from Tavannes, Switzerland returns with yet another solid and impactful EP, this time entitled Tales Of Reality.

After playing many shows across Switzerland in 2015 thanks to the very positive reaction of Metalcore fans to Red Dawn Of Humanity, with Henriette B sharing the stage with bands such as Texas In July, Walking With Strangers and Benighted, it’s noticeable how the quality of the music delivered by the band improved in Tales Of Reality. Albeit always keeping loyal to their foundations and style, there are many new elements and nuances added to the new EP that end up differentiating it from its predecessor, and that in my opinion will definitely open even more doors for Henriette B to cross the boundaries of their homeland and go further in their promising career.

Although the opening track Utopia has a very similar sonority to the music found in their 2014 EP, it’s a lot more polished and professional, showcasing the evolution in the music by Henriette B. In addition, while Ian Girod is back with his bestial growls, newcomer Fabio Duro proves through his refined technique why he was selected by the band to be responsible for their beats, adding an extra layer of intricacy to their music. And in Face Or Flee, Ian and his desperate vocals follow the lead of guitarists Vincent Simonin and Thierry Grundbacher, who bring the musicality closer to Death Metal, but who also at the same time present hints of Alternative Metal through their riffs and solos.

As mentioned in the review for their previous EP, there’s always a lot of melody amidst all the brutality blasted by the band, which is also the case in The Other Side, a typical song to break your fuckin’ neck by headbanging like a maniac anytime you listen to it, not to mention its deranged ending. And following that bestial tune we have Visions, where Fabio continues to pound his drums with a lot of precision and feeling. It’s high-quality Metalcore with a strong atmosphere supporting the band’s “noise”, once again exhibiting a good fusion of heavy riffs and harmonious solos and passages.

Now it’s time for bassist Fabien Voumard to fire his thunderous and groovy bass lines in the awesome The Mistake We Made, providing the other band members everything they need to sound even more violent. Besides, this song makes it clear that it’s when Henriette B accelerate their music that they truly thrive. And The Hidden Kingdom closes the EP by offering us more of the excellent riffs by Vincent and Thierry in a violent Melodic Death Metal vibe, not to mention the great performances by Ian and Fabio with their sonic weapons.

Henriette B want to keep telling you their own tales of reality and showing you their vision of the world, and in order to do that they need you to visit their Facebook page, YouTube channel and SoundCloud. And, obivously, if you’re a fan of European Metalcore you should also go purchase their brand new EP at their BandCamp page, at CD Baby, on Amazon and other locations. Thus, after two strong EP’s, I guess the next step for those Swiss metallers is to continue their hot streak by delivering us their first full-length album, how about that? If they keep their music as potent as it is now when that time comes, I’m pretty sure they will engrave their name deeply in the world of Metalcore and heavy music in general.

Best moments of the album: The Other Side and The Mistake We Made.