Renowned Canadian keyboardist and vocalist Lindsay Schoolcraft will take you on a very entertaining journey through the realms of Gothic Rock and Metal in her debut solo album. 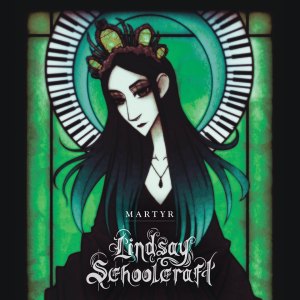 An accomplished singer, songwriter, harpist, and pianist in her own right, Canadian keyboardist and vocalist Lindsay Schoolcraft (Cradle of Filth, Antiqva, The Astroplex, Daedalean Complex) is about to release her debut solo album entitled Martyr, a very entertaining feast of Gothic Rock and Metal recommended for admirers of the dark music played by bands like Evanescence and Nightwish, while  Cradle of Filth enthusiasts will certainly enjoy hearing this darkly romantic side of Schoolcraft’s music. Hailing from Oshawa, a city on the Lake Ontario shoreline, Lindsay is not only deeply proud of her Canadian roots, but she’s also a declared fan and a connoisseur of all things rock and metal, making us at The Headbanging Moose really proud of her development and growth as a musician, and with Martyr being the perfect depiction of all her dedication and passion for heavy music.

Produced, engineered, and mixed by Tyler Williams of Monolithic Productions, mastered by Lasse Lammert, and featuring a classy cover artwork by Anastasia Solti and logo by Lindsey Márton, Martyr is Lindsay’s personal tribute to rock and metal, channeling her years of experience as a musician and as a human being into ten original composition written by Lindsay herself together with American multi-instrumentalist Rocky Gray (Living Sacrifice, Evanescence, We Are the Fallen, Soul Embraced, Machina), who’s also responsible for all guitars, bass and drums in the album. Not only that, Martyr also brings an array of very special guests, including Xenoyr, vocalist for Australian Extreme Progressive Metal band Ne Obliviscaris, and who also plays with Lindsay in her Black Metal project Antiqva, adding an extra touch of darkness to Lindsay and Rocky’s goth-rock extravaganza.

Somber piano notes and a modernized vibe set the tone in Saviour, with Rocky slashing his strings before Lindsay comes ripping with her Amy Lee-inspired vocals in a top-notch Gothic Rock and Metal exhibit by our beloved Canadian musician, and a delicious feeling keeps permeating the air in Dangerous Game, where Lindsay not only does a great job on vocals, but her trademark keys also bring a nice touch to the music. Moreover, Rocky and his low-tuned bass punches sound as thunderous as they can be, adding the word “Gothic” to the final result. Stranger is even more delicate than its predecessors, but still presenting the electricity of Gothic Rock, and you can sense elements from bands like Evanescence, The Cure and Depeche Mode in the music; and her smooth piano notes keep dictating the rhythm in Into The Night, where it’s impressive how Lindsay can sound so gentle and dark at the same time (maybe a “side effect” of her years with Cradle of Filth), offering us all a ballad perfect for enjoying together with your loved one.

Can we call Blood From A Stone a Gothic, darker version of Enya, mainly due to the gorgeous way Lindsay declaims the song’s touching lyrics? Put differently, let Lindsay and her serene vocals and piano mesmerize you for over five minutes, which is also the case in the cinematic Dawn, where Lindsay is unstoppable with her melancholic piano notes in this ethereal and almost instrumental composition. Then supported by the innocent voices from a children’s choir, Lindsay’s keys get more piercing while Rocky brings heaviness to the musicality with his riffs and (programmed) beats in Remember, whereas in the metallic and gracious See The Light it’s time to put the pedal to the metal, reminding me of some of the best creations by UK’s Industrial Rock/Metal band Lahannya, featuring nonstop drums and the guttural vocals by guest Xenoyr, bringing the “beast” to the music while Lindsay obviously represents the “beauty”.

Where I Fall, another touching ballad by Lindsay, is perfect for soothing your soul on a cold and dark night, bringing to our ears spot-on piano notes and keys, whereas My Way Without You, featuring guest Lauren Francis (Devilment) on backing vocals, is almost just a “vocal and piano” song, showing how much Lindsay loves this variation of Gothic Rock. And last but not least, although the whole album is amazing, I must admit her version for The Cure’s dark classic Lullaby (you can check the original version HERE) is beyond hypnotizing,  and I’m sure Robert Smith is proud of Lindsay not only for the amazing job she does on the piano, but especially by the way she declaims the song’s wicked lyrics with so much feeling.

As already mentioned, we at The Headbanging Moose couldn’t be happier and prouder of Lindsay Schoolcraft and her newborn spawn Martyr, and if you also want to show your sincere support to such talented Canadian woman you should definitely follow her on Facebook, subscribe to her YouTube channel, listen to more of her music on Spotify, and purchase Martyr (anytime soon) and all of her other releases from her own BandCamp page. In a nutshell, Martyr a a more-than-enjoyable album of rock and metal music, and let’s hope it inspires Lindsay to keep releasing albums under her solo career for years to come and, consequently, to visit your city or town in a not-so-distant future for live performances, embellishing the airwaves with her undeniable talent and charisma.

Best moments of the album: Saviour, See The Light and Lullaby.

Worst moments of the album: Dawn.