The Indonesian rabid dogs of Death Metal are ready to attack in their visceral 13-track debut opus packed with aggressive riffs and intense blast beat while at the same time raising awareness about animal welfare. 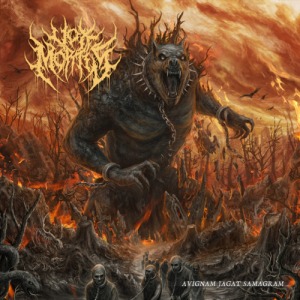 Mixed and mastered by Indonesian musician Muhamad Ridho Leonard (of bands like Choria, Infitar and Kill Athena), who’s also the session guitarist in the album under the moniker Rsharsh, Avignam Jagat Samagram is the debut opus by Indonesian Death Metal act Vox Mortis (which translates from Latin as “the voice of the dead”), containing 13 visceral songs packed with aggressive riffs and intense blast beat while at the same time raising awareness about animal welfare. Formed in 2020 in Jakarta, Indonesia’s massive capital sitting on the northwest coast of the island of Java, by vocalist Doni Herdaru Tona (of Funeral Inception, Bloody Gore, Kerangkenk and more), bassist Donirro and drummer Achmad Mustaid (of Vomitology and Funeral Inception), Vox Mortis will pulverize your senses with Avignam Jagat Samagram, attacking you like a feral beast while sending a very important (and obviously dark) message about how animal cruelty is helping to drive our society to its abominable and inevitable end.

Rev up your engines as total annihilation is about to start in Sadisfaction, with Achmad crushing his drums ruthlessly while the guitars by Rsharsh will slash your ears like a sharp razor blade. In other words, it’s brutal and technical Death Metal for the masses, which is also the case in Forever No To Dog Meat, a Brutal Slamming Death Metal chant made in Indonesia where the band tries to uncover the dark side of dog meat trade circulation and the cruelty behind it until it is served as food, with Doni sounding like a creature from the abyss with his guttural growls; followed by the title-track Avignam Jagat Samagram, just as bestial and pulverizing as the previous songs, with the addition of some background orchestrations making it even more diabolical and with Donirro and Achmad being on fire with their rumbling bass and blast beats. Their fusion of old school Death Metal with epic music goes on in Bayar Dendam Balas Hantam, where Donirro delivers some Alex Webster-inspired bass jabs while Achmad keeps hammering his drums furiously; and talking about human abusive behavior and animal cruelty, it’s time for the trio to get back to a rawer and more visceral sonority in Primata Durjana, where Doni keeps barking like a deranged dog (which makes total sense) accompanied by the demented kitchen by his bandmates. Then vile and aggressive from the very first second, Mati! Mati! Mati! Is another solid display of savagery in the form of Death Metal spearheaded by the thunderous drums by Achmad.

In Tetes Darah Pecundang the band adds elements of Groove Metal to their usual sonic madness, but of course always loyal to their vile roots, with Doni’s growls walking hand in hand with the stone crushing beats by Achmad, whereas leaning towards the Death Metal played by Cannibal Corpse in their most recent albums the band fires the obscure and groovy Torture 365, presenting an amazing job done by Donirro with his sick bass while Rsharsh’s riffs overflow violence. There’s no time to breathe as Ronta Semesta begins in full force, led by the infernal drumming by Achmad and the always wicked roars by Doni, and also no sign of things slowing down as Vox Mortis keep demolishing our senses in Di Atas Altar Tradisi, with Doni vociferating manically while Rsharsh brings wrath to the music with his riffage. After a wicked intro the band comes back with their fusion of Death Metal and Deathslam in the form of Friends Not Food, where the bass by Donirro sounds more metallic and vicious as the music progresses, and the band delivers a fast and hellish Death Metal sonority that’s pretty good by itself, but that of course lacks Doni’s evil roars, in the instrumental Ode Untuk Sang Jendral. Lastly, how about a sick tribute to the one and only Morbid Angel with Chapel of Ghouls/Immortal Rites, both taken from their 1989 classic album Altars of Madness? You can check the original versions for Chapel of Ghouls and Immortal Rites on YouTube and see for yourself that Vox Mortis’ tribute lives up to the darkness of the original songs. 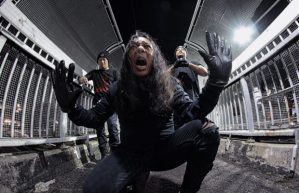 If you want to know more about those relentless Indonesian death metallers and their quest for animal rights, you can start following them on Facebook and on Instagram, subscribe to their YouTube channel and stream more of their music on Spotify, and sooner than you think purchase their excellent and devastating debut album from their own BandCamp page, from the Necropsy Records webstore and from the Rapture Records webstore. The album’s aggressive album art, designed by the talented Indonesian musician and illustrator Adi Christianize (Dechristianize Art), is the perfect depiction of the music by Vox Mortis, where a beastly, monstrous dog is finally unleashed from his chains and is ready to seek revenge against mankind, exactly how the Death Metal by those Indonesian rabid dogs sound. It’s visceral, violent and thrilling from start to finish, just the way we fans of extreme music love it, and I personally can’t wait to see what’s next for such promising band from “The Emerald of the Equator.”

Best moments of the album: Forever No To Dog Meat, Avignam Jagat Samagram and Torture 365.