This up-and-coming Algerian Death Metal outfit is back with an in-depth extreme musical perspective into the devastating, global apocalypse. 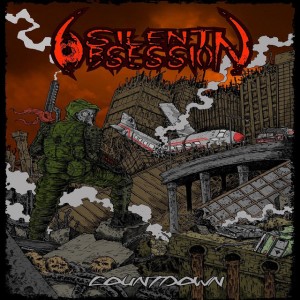 Following the release of their 2020 EP Lost, Algiers, Algeria-based Death Metal outfit Silent Obsession is back with another short and sweet display of violence, heaviness and speed in the form of a new EP entitled Countdown. Written and composed by the band’s mastermind and guitarist Max Marginal and produced by Redouane Aouameur of Fermata Studios, the EP portrays an in-depth extreme musical perspective into the devastating, global apocalypse carefully brought forth by the aforementioned Max together with Danny on vocals and guitars, Manil on bass, and Ben Der on drums. “It’s about the apocalypse, the end of the world,” commented Max, also complementing by saying that “Silent Obsession reaches a highest level of a global mental failure, when madness become something legit in this society,” giving us all a very good idea of all the aggressiveness and brutality found in the band’s new EP.

After the short and infernal intro Apocalyptic Manifestation, Silent Obsession come crushing our souls with their venomous Death Metal in End of an Era, where Ben Der showcases all his talent behind his drums, providing Danny and Max all they need to slash their strings mercilessly and with Danny also vomiting the song’s acid words nonstop. There’s absolutely no time to breathe as the quartet keeps hammering our skulls with their old school Death Metal in Exhausted Resource, another violent and heavy-as-hell creation where Manil and Ben Der are on fire with their thunderous kitchen accompanied by the monstrous roars by Danny and the always visceral riffage and wicked solos by Max, living up to the legacy of bands the likes of Morbid Angel, Cannibal Corpse and Deicide and, therefore, leaving us utterly eager for more of their music in a not-so-distant future.

If you’re curious to know how ass-kicking Algerian Death Metal sounds, you can listen to Silent Obsession’s new EP on YouTube and on Spotify, and soon you’ll be able to purchase it from your regular retailers and show your support to the underground from “Algiers the White.” Also, don’t forget to follow the band on Facebook for news, tour dates and other nice-to-know details about Max and his henchmen. Silent Obsession couldn’t have released their new EP about the end of the world in a more appropriate time, as it looks like that’s exactly what we’re experiencing everywhere with viruses, natural disasters, wars, conflicts, hunger and climate change disturbing our peace. At least, as I always say, we’ll have another set of high-quality songs to be added to the end of the world’s soundtrack when that inevitable moment comes, and let’s hope the band releases a more robust full-length opus in the coming months to show us everything they got in the name of old school Death Metal.