An earthquake of different influences blended together through proficient musicianship by an up-and-coming Pakistani Death Metal horde.

Formed in 2016 in Islamabad, the capital city of Pakistan, out of love for both old school and modern Death Metal, the up-and-coming five-piece horde known as Azaab (which is pronounced “aa-zaab” and translates roughly as “calamity”) is proudly unleashing upon humanity their excellent debut effort, entitled Summoning the Cataclysm, highly recommended for admirers of the music by Morbid Angel, Decapitated, Nile and Abysmal Dawn, among many more. Recorded, mixed and mastered by the band’s own guitarist Shahab Khan at Fractal Flow Studios, and displaying a demonic artwork by Ardha Lepa, Summoning the Cataclysm is an earthquake of different influences blended together through proficient musicianship by the aforementioned Shahab Khan on the guitars together with Saad Latif on vocals, Afraz Mamoon also on the guitars, Waqar Ghayas on bass and Adhytia Perkasa on drums, as well as a handful of guest musicians including former and current members from Death, Chthe’ilist, First Fragment and Worm, with the album’s lyrical themes spanning topics such as horror, politics, human nature, the end of days, war and even sci-fi.

The somber, acoustic guitars by Shahab and Afraz in the intro Pandemonium Twilight set the stage for Azaab to smash our senses in Carbon Plague, featuring additional vocals by guests Nick Mkhl (Brutal Sphere) and Aissam El Hassani (Vile Utopia), with Adhytia hammering his drums in the name of Death Metal while Saad roars deeply like an inhumane creature. More of their Technical and Progressive Death Metal is offered to us all in A Hollow Pact, where once again the band’s guitar duo extracts sheer electricity from their axes supported by the unstoppable bass jabs by Waqar, whereas Preachers of Hate is absolutely heavy and menacing from the very first second, with the guttural roars by Saad penetrating deep inside your mind mercilessly in a first-class fusion of modern-day Technical Death Metal with the band’s own Pakistani twist.

Featuring a sick guitar solo by guest Bobby Koelble (Death), it’s time for more savagery, gore and hatred by Azaab in When Worlds Collide, where Adhytia sounds infuriated behind his drum  accompanied by the always metallic bass by Waqar; and Shahab and Afraz deliver incendiary, crushing riffs in The Infernal Citadel, with a guitar solo by guest Phil Tougas (Chthe’ilist, First Fragment, Worm) this time, inviting us all to slam into the pit to their pulverizing Death Metal. Then a serene, acoustic intro explodes into sheer brutality in Trophies of Flesh, where all band members add tons of progressiveness to their core sonority, therefore turning it into the most intricate of all songs of the album. Azaab still have a lot of fuel to burn offering us all their venomous rendition for Decapitated’s The Empty Throne (check the original version HERE), showcasing an amazing job done by Saad on vocals, followed by B.L.O.O.D.B.O.R.N, a hellish, demolishing creation by the quintet with Adhytia sounding like a stone crusher on drums while Shahab and Afraz keep slashing our ears with their ass-kicking riffage and solos. 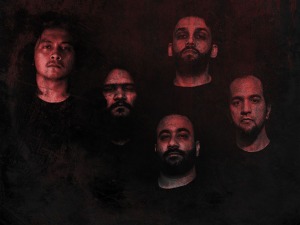 This unrelenting, vile horde hailing from Pakistan is waiting for you on Facebook and on Instagram to crush your senses with their top-of-the-line Death Metal, and of course if you want to show your total support to the underground you can purchase Summoning the Cataclysm from the band’s BandCamp page or from the Satanath Records’ BandCamp page (or click HERE for different locations where you can buy or stream the album). After all is said and done, Azaab were not joking when they said they had something for all types of Death Metal fans with their debut opus, as Summoning the Cataclysm indeed brings an amalgamation of elements from the past, present and future of Death Metal, all of course sounding very cohesive and as brutal as it can be for our total delight, positioning Azaab as one of the most interesting name of the Pakistani scene and, consequently, paving a fantastic road ahead of those death metallers.

Best moments of the album: Carbon Plague, Preachers of Hate and B.L.O.O.D.B.O.R.N.

Worst moments of the album: A Hollow Pact.