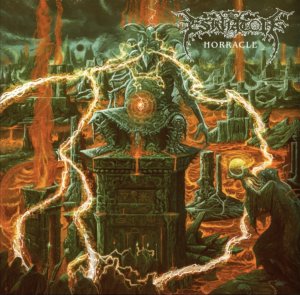 Australian horde Eskhaton had a lot of momentum on the run up to the end of the decade, and then the pandemic hit. Now though, the band has returned with a Hell’s Headbangers Records released, a five track EP entitled Horracle.

Eskhaton perform with a frenetic, urgent energy, and they aren’t averse to dabbling in unorthodox time signatures which break up the flow of their blistering brutality. Horracle is a combination of ruthless, menacing growled vocals, intensive cavernous sounding drum tones, as well as thundering bass play and maniacal, scorching guitar leads and riffs.

When Eskhaton aren’t ploughing a deep groove of bleak Death Metal savagery, their guitarists engage in frequent bouts of technical barbarity in the form of colossal guitar solos that sound out at will and rise from the gloom and up into the toxic atmosphere created by this malevolent and crushing release. 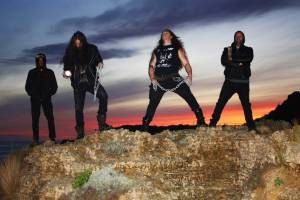 I think the artwork for this release really hits the spot, for just like the album art there is a shocking current of damaging energy that runs through this release, whether it be from the controlled pummelling from the man behind the drum kit, the unstoppable ferocity of the vocalist or the marauding aggression from the guitarists.

With only five tracks to play with, Eskhaton do keep things pretty similar throughout, so you could say a lack of variety in their play is a downside, however this is picking fault when there is very little to be had. This EP makes up for this shortcoming with stunning brutality and technical wizardry, and the end result is a very solid slab of Aussie Death Metal.

Worst moments of the album: None

Released in 2022 by Hells Headbangers Records