After a long time in peace and silence, this Dutch horde is ready to kill once again armed with a brand new EP of pulverizing Death Metal.

After a long time in peace and silence, the Dutch Death Metal collective that goes by the name of Rotten Casket is lifting the coffin lid and crawling back onto this planet to shed earthy rotten tunes onto mankind with their brand new EP First Nail in the Casket, following up on their 2015 EP’s Simply Rotten Death and Consumed by Filth. Recorded, mixed and mastered by Tom Meier, and displaying a raw, old school artwork by Roberto Toderico, First Nail in the Casket is not only a harbinger for the first full-length album by vocalist Martin van Drunen (Asphyx), guitarists Frank Bergesson and Yorck Segatz (Sodom), bassist Patrick van der Beek (Disabuse, Born Infected), and drummer Stefan “Husky” Hüskens (Asphyx), but also a statement that Rotten Casket are back on track again and ready to kill, paving a pulverizing path ahead of the band.

A demented roar by Martin ignites the Hardcore-infused Death Metal attack entitled Covid-119, with Frank and Yorck showing no mercy four our damned souls with their infernal riffs while Patrick and Stefan keep the atmosphere as dense and obscure as possible with their wicked kitchen. Then adding elements of D-Beast Crust to their already chaotic sonority it’s time for the quintet to pulverize us all in Caskets on Wheels, with their guitars breathing fire while Patrick continues to hammer his bass mercilessly, whereas Bonetomb Residents is another headbanger that will inspire you to slam into the pit while holding a cold beer in a display of traditional Death Metal with an European twist. Not only that, Martin’s raspy, anguished growls add an extra touch of insanity to the overall result for our vulgar delectation. Lastly, get ready for one final explosion of dementia and rage in the form of Death Metal in Coffin Birth, with Martin’s vociferations being in total sync with Frank and Yorck’s evil guitars, sounding evil and dirty from start to finish. 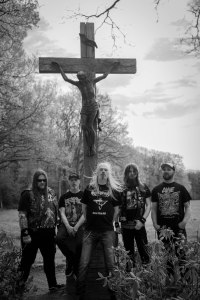 It’s extremely easy to enjoy First Nail in the Casket in its entirety and to show your support to the band by purchasing a copy of the album. Simply go to YouTube and to Spotify for a full stream of the EP, and grab a copy of it from the band’s own BandCamp page, from Lycanthropic Chants as an LP or as a cassette, from Supreme Chaos Records as a CD or as an LP, from Apple Music, or click HERE for multiple ways you can buy the album. Also, let’s show our admiration for Rotten Casket by following them on Facebook and on Instagram, getting to know more about the band, their tour dates and plans for the future. First Nail in the Casket might not exactly be their first nail in the casket, but it’s not their last either, proving those Dutch metallers still have a lot of fuel to burn armed with their undisputed Death Metal.

Best moments of the album: Covid-119 and Caskets on Wheels.