As Thrash Metal titans Slayer will be performing live here in Toronto on November 21, I decided to write some posts dedicated to them, one of my top bands of all time together with Iron Maiden and Judas Priest. The first one is about an album that might not be as classic as Reign In Blood or South of Heaven, but it is for sure one of their most badass records to date, starting by its controversial name: God Hates Us All. Can you think of a more impactful name for a Thrash Metal album than that? I don’t think so.

There are no ballads in this album (in fact, there are no ballads in ANY Slayer album!), no acoustic songs, no beautiful lyrics or moral lessons. Kerry King may not be the best lyricist in the world, but he delivers the message he wants in every song, which in this album are more focused on religion and revenge than any previous Slayer albums. Not only that, none of the lyrics is suitable at all for any religious person. And what can I say about the album art? It’s a masterpiece that perfectly represents the musical content in God Hates Us All. I just feel sorry for the fans that couldn’t buy the album with its regular version of the front cover, but with that shitty white one instead (see it HERE).

Before the massacre starts, there a truly badass intro, Darkness of Christ, which is there to pump you up and show you what’s about to happen with your neck. Then comes the classic Disciple, one of the best and heaviest Slayer songs ever, with an awesome chorus that will make you scream the name of the album out loud every time you hear it until you lose your voice. God hates us all! God hates us all! If you’re a very religious person, well, stop listening to this album before you reach the next song: God Send Death is another powerful track, also excellent when played live and again with strong dark lyrics. 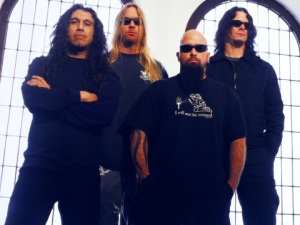 The sequence of tracks after that, from New Faith to Seven Faces, shows a more modern Slayer, maybe not as modern as what they did in Diabolus in Musica but modern enough to make some diehard fans a little distrustful. It’s good material, though, especially the song Exile. After that, the band delivers us a not so fast track, but as heavy as it can be: Bloodline, which also featured in the soundtrack of the movie Dracula 2000, has the best lyrics of the album, a cool heavy riff, and an excellent chorus. It’s the only reason why I would watch that movie again, because honestly it’s a very bad one! After Deviance, the weakest track of the album for me, we have three amazing songs: War Zone is perfect for mosh pits, Here Comes the Pain has a very nice riff, and Payback is recommended for anyone that is looking for, well, a violent payback.

What doesn’t change in the whole album is how amazing the band is: Tom with his unique voice, Kerry and Jeff with an avalanche of sick riffs and solos, and Paul smashing his drums like there’s no tomorrow. Although I consider Dave Lombardo the best drummer in the world, I also enjoy Paul Bostaph with his insane speed and technique. This guy is a monster behind his drums, especially when he plays live, and all the material he recorded with Slayer, Testament, Exodus etc. is pure Thrash Metal worth every penny. In my humble opinion, God Hates Us All is the best album with Bostaph on drums, and if you don’t agree with me just listen to War Zone, Payback or God Send Death and you’ll see what I’m talking about.

In summary, a very substantial Thrash Metal album with a more modern Slayer than usual, recommended for anyone who wants to bang their heads until they break their necks. Besides, it’s FUCKIN’ SLAYER after all!

Worst moments of the album: Seven Faces and Deviance.