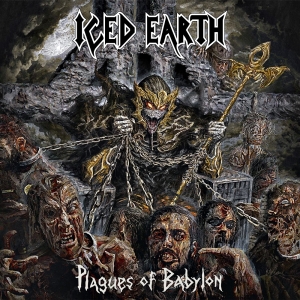 Based on one of the first releases of the year, the album Plagues of Babylon from the American Heavy Metal band Iced Earth, it looks like 2014 will be very promising for the world of heavy music. It’s not a masterpiece, nor even the best album of the band’s solid career, but it sure is a pretty good Heavy Metal album. After the interesting Dystopia (2011), which marked the debut of Stu Block on vocals, Iced Earth suffer a few more lineup changes now (again, and again, and again…) with Luke Appleton and Raphael Saini debuting on bass and drums, respectively. All those changes usually affect the quality of the music of any band, or at least the continuity of the work done, but fortunately the final result in Plagues of Babylon is above average and the changes are barely noticed.

Half of the songs in the album follow the “Something Wicked” concept, according to Jon Schaffer, while the rest have no connection to it (which doesn’t mean they’re not interesting songs). The band sets the bar really high with the opening track, Plagues of Babylon, with its imposing start/intro, awesome chorus (“So if you’re asking yourself, why? / Your eyes are blind to the raging storm / Will they cleanse the Earth of humanity? / Unleash the Plagues of Babylon?”), and almost 8 minutes of pure Iced Earth always led by Jon Schaffer’s unparalleled riffs. And is it Stu or Matt Barlow on vocals? It’s hard to tell sometimes. Democide has another “marching” intro, as if the band was getting “ready for war”, and its fast rhythm full of Thrash Metal elements will surely turn it into a fan favorite.

Plagues of Babylon continues with The Culling, which is a regular song with a nice solo, but nothing compared to the previous tracks, and the great Among the Living Dead with the one and only Hansi Kursch (Blind Guardian) also on lead vocals. It’s a powerful song with stunning riffs and variations, making it the best of the album in my opinion. In Resistance, Stu sounds less like Matt, and it’s interesting to see how Jon tried to create an epic song here with a “Babylonian” heavy riff. The End? sounds like some of the old Iced Earth songs; however, it’s too long and becomes boring after a while.

The second half of the album begins with If I Could See You, a beautiful semi-acoustic ballad with a great job done by Stu, despite its extremely mellow cliché lyrics. And here comes Jon Schaffer with one more epic song with over 6 minutes, Cthulhu, but it lacks more creativity and energy. Peacemaker is traditional Iced Earth (so traditional Stu sounds exactly like Matt here): I enjoyed a lot the guitar solos in this track, but again Jon could have added more creativity into it to make the overall result even better. 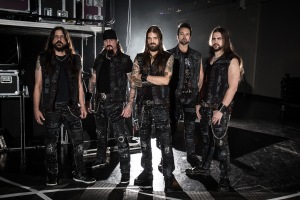 Parasite offers absolutely nothing new: it’s just filler and probably the worst song of all. On the other hand, Spirit of the Times puts the album back on track, and you must agree with me that Jon not only loves Heavy Metal ballads but also knows how to create some very good ones. Then comes a weird cover for the song Highwayman, from American songwriter Jimmy Webb, with Michael Poulsen (Volbeat) and Russell Allen (Symphony X) on lead and backing vocals together with Jon Schaffer, and finally an outro so stupid that I prefer not to talk about it.

Last but not least, Plagues of Babylon has an astounding front cover, featuring Iced Earth’s unique mascot Set Abominae with his army of living dead. It’s pure art, a brilliant concept, and I just love it. Furthermore, you can stream the full album here on Iced Earth’s official website through the app Spotify, and start getting used to the songs before it’s actually released and you can buy your physical copy of it, and before their 2014 world tour, with many dates across the USA and Canada including a concert in Toronto on Monday, April 14.

To sum up, the partnership between Jon Schaffer and Stu Block seems to be working very well in the past few years, and the powerful music in Plagues of Babylon is a good example of it. As I mentioned before, if most of the releases in 2014 are as good as this album, then we metalheads will have a very happy headbanging year.

Best moments of the album: Plagues of Babylon, Democide and Among the Living Dead.

Worst moments of the album: The Culling, The End? and Parasite.