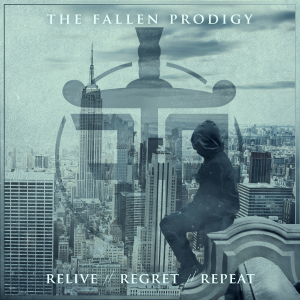 If you’re a fan of modern-day Melodic Death Metal and Metalcore, I highly recommend you go take a detailed listen at Relive//Regret//Repeat, the brand new album by New York City-based female-fronted outfit The Fallen Prodigy. Featuring a straight-to-the-point artwork by Rob Walden (Rob Walden Design), Relive//Regret//Repeat, the follow-up to the band’s 2015 EP Passengers, consists of 11 stunning metal tracks influenced by a myriad of modern metal elements, being absolutely perfect for fans of the high-octane music by renowned acts such as Trivium, Killswitch Engage, Arch Enemy, As I Lay Dying and All That Remains, among several others.

Comprised of the unstoppable Jay Jimenez on vocals, Andrew Padilla and Daniel Davenel on the guitars, Jonathan Rodriguez on bass, and Joseph Falzone on drums, The Fallen Prodigy solidified their lineup back in 2014 and wasted no time, putting together music that can crush the stereotypes that may surround the metal genre. Through hard work, dedication and great music, The Fallen Prodigy set out to bring something new and unique back to the metal scene, and the music found in Relive//Regret//Repeat will show you exactly what they mean by that, smashing you like an insect with its over 50 minutes of top-of-the-line Melodic Death Metal.

The opening track Extinct is modern, visceral and aggressive form the very first second, with the guitar duo Andrew and Daniel sounding absolutely fantastic. However, it’s Jay who steals the spotlight with both her deranged growls and her potent clean vocals, showcasing all her talented right from the start of the album. Even more violent than the album opener, Boy Who Cried Wolf presents a devilish Jay on vocals, singing and screaming about our vile human nature (“You live life like you deserve more than others / Manipulating everyone and everything to have things your way / You long for acceptance and will seek it at any cost / Consumed by arrogance you’ll always find yourself”), while Joseph doesn’t let the insanely high level of energy go down with his frantic beats; followed by Regret, which starts in an almost electronic vibe before exploding into vibrant Metalcore, with Jay once again providing a fantastic balance between her harsh screams and clean vocals and with the crisp sound of guitars boosting the song’s impact considerably.

Leaning towards more traditional Melodic Death Metal (especially the characteristic Scandinavian sound), the whole band blasts the fresh and gripping Stray, with highlights once again to the amazing sound extracted from the guitars by Andrew and Daniel, whereas Misery is led by the dynamic drumming by Joseph, with Jonathan delivering those rumbling Groove Metal punches from his bass while the music alternates between neck-breaking moments and total devastation. The awesome Eighty-Sixed is a heavier-than-hell, straight-to-the-face high-end Metalcore tune where the extremely talented Jay growls and screams nonstop like a rabid beast, or in other words, it’s that type of song that will ignite some serious circle pits during their live concerts; and featuring guest vocalist Lauren Babic of Canadian Alternative Metal act Red Handed Denial, Composure is a very technical and melodic creation by The Fallen Prodigy, yet still as aggressive as it can be, delivering a modern-day message from the band to our ears (“Disaster awaits those who find a home in a filth called misery / My soul is being held captive / Somewhere it’s screaming just let me go home / Just let me go home”).

Then get ready to bang your head like a maniac to the crushing main riff in Fractured, before a slamming feast begins led by the brutal beats by Joseph in a multi-layered composition where Jay thrives thanks to the amazing support provided by her bandmates. In Repeat, featuring guest vocals by Will Ramos of American Deathcore band A Wake in Providence, we face a band that doesn’t know the meaning of the word “soft”, with the total havoc blasted by the entire band being spiced up by the welcome dosage of progressiveness brought forth by the guitar duo to the musicality; followed by Relive, a good song that feels a bit confusing at times despite the always solid work done by the stringed trio Daniel, Andrew and Jonathan, accompanied by guest guitarist Angel Vivaldi. Last but not least, the final song of the album, titled Endure, is a solid statement by Jay and the guys that they will carry on no matter what, keeping the flame of Melodic Death Metal alive and kicking, enfolded in a classic sound with the band’s own twist, therefore ending the album on a truly high note.

You can listen to the entire Relive//Regret//Repeat on Spotify and get a better sense of how potent and dynamic the music by The Fallen Prodigy is, and also visit their Facebook page for news and tour dates, and their YouTube channel for more of their music. And in case you want to grab a copy of such electrifying album, there are several location where you can find it such as the band’s own BandCamp page and Big Cartel (as a CD + poster bundle or a CD + T-shirt bundle), on iTunes, on Amazon, or on CD Baby. If I were you I would definitely keep an eye on what The Fallen Prodigy are up to, because whenever they take your town by storm you must be there to experience a lesson in Melodic Death Metal and Metalcore, just like what they did in Relive//Regret//Repeat. In other words, do you think you have what it takes to face Jay and the guys?

Best moments of the album: Extinct, Boy Who Cried Wolf, Eighty-Sixed and Fractured.

Worst moments of the album: Relive.