An avantgarde and experimental album of Black Metal infused with dark atmospheres and nuances, meticulously put together by a one-man army hailing from France. 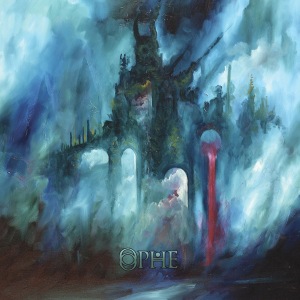 Litteras Ad Tristia Maestrum Solitude, or “letter to the sad comfort of solitude” from Latin, is not only the brand new album by French Avantgarde Black Metal one-man army Ophe, but also a very avantgardish and experimental piece of Black Metal fixing without any doubt a new limit to the borders of a sound that is a personal mix of Extreme Metal, avantgarde music and dark atmospheres. Recorded and mixed by Edgard Chevallier at Lower Tones Place Studio, and featuring a glamorous artwork painted by the talented French artist Jeff Grimal, Litteras Ad Tristia Maestrum Solitude will bring an obscure joy to the hearts of fans of the music by bands such as Fleurety, Blut Aus Nord, Manes, Anorexia Nervosa and Aevangelist.

Formed in 2015 in Châtillon, a commune in the southwestern suburbs of Paris, by multi-instrumentalist Bargnatt XIX, better known for being the voice and guitar for French Avantgarde project Område, Ophe will certainly crush your senses throughout the 36 minutes of distorted passages, wicked noises and eerie gnarls in Litteras Ad Tristia Maestrum Solitude, with the sonic extravaganza crafted by Bargnatt XIX being beautifully complemented by the saxophone schizophrenia delivered by guest musician Val Dorr (of Aevangelist). In other words, open your mind, let the music by Ophe penetrate deep inside your soul, and the way you view extreme music will never be the same again.

In the opening track, titled Somnum Sempiternum (which means “everlasting sleep” or ‘eternal sleep” from Latin), Bargnatt XIX begins firing Stygian riffs and blast beats together with his hellish gnarls in a vibrant and classy display of Atmospheric Black Metal, with the music getting darker, more fiendish and more demented as time goes by. Furthermore, the wicked saxophone sounds by Val Dorr add a touch of lunacy to the overall result, making the whole song even more delightful. Then we have Decem Vicibus (or “ten times” from Latin), a very obscure composition with the spoken words by Bargnatt XIX sounding smooth but perturbing at the same time, not evolving to any regular type of music you might be accustomed to. Well, that’s the beauty of Ambient Black Metal, as the creepiest sounds can become high-quality music just like that. And medieval, somber background noises set fire to an uncanny creation by Ophe named in XVIIII, with the sax by Val Dorr sounding even more disturbing than before, while Bargnatt XIX’s deep, enraged roars match perfectly with the hypnotizing heavy sounds emanating from all other instruments, in special the delicate and electrified guitar riffs and solos.

Missive Amphibologique D’Une Adynamie A La Solitude, a long and stylish song name that means “amphibological missive of an adynamy to loneliness” from French, is an 11-minute phantasmagoric aria that can easily be used as the soundtrack to your darkest nights, with its blast beats and ferocious growls bringing total chaos to our souls. And the song’s intense insanity goes on and on, with no sign of happiness or joy, courtesy of Bargnatt XIX and Val Dorr who generate a wall of strained, striking and grim sounds and tones in what can be considered a “controlled chaos”. Lastly, after such grandiose havoc it’s time to slow things down in Cadent, where Bargnatt XIX soothes our souls with his semi-acoustic lines embraced by an apocalyptic background to give it a beyond atmospheric vibe, closing the experimental journey by our skillful one-man army in a beautiful way.

In case you want to join the eccentric world of Bargnatt XIX and his Ophe, you can visit the project’s Facebook page for more details about such distinct endeavor, listen to Litteras Ad Tristia Maestrum Solitude on Spotify, and purchase the album from Ophe’s own BandCamp page, from My Kingdom Music’s Big Cartel page, from the Season of Mist webstore, and from the JPC webstore, as well as from your regular retailers iTunes, Amazon and Discogs. And if this enticing album is Bargnatt XIX’s personal letter to the sad comfort of solitude, I can’t wait to see who or what he’s going to write a letter to next.

Released in 2018 My Kingdom Music