Hallowed Be Thy Ale.

“I’m waiting in my cold cell, when the bell begins to chime
Reflecting on my past life and it doesn’t have much time
Cause at 5 o’clock they take me to the Gallows Pole
The sands of time for me are running low”

British Heavy Metal legends Iron Maiden are not only a metal music machine like everyone says, but in the past few years they’ve also mastered the art of craft beer brewing in a beyond fruitful partnership with independent family brewers Robinsons Brewery. Once again, the dynamic duo of Robinsons’ master brewer Martyn Weeks and Iron Maiden’s multi-talented, restless and wild lead vocalist and ale aficionado Bruce Dickinson have teamed up to create something very special for beer and music fans alike, the brand new Belgian style beer Hallowed (available from October 2017 for a limited period of four months according to the band itself), following on from the success of the original Trooper Beer, which has sold over 15 million pints since its launch in 2013, and previous limited edition beers Trooper 666, Trooper light Brigade and Red ‘N’ Black, all part of the already imposing collection of Iron Maiden beers. As a matter of fact, Hallowed is obviously named after Iron Maiden’s all-time classic Hallowed Be Thy Name, from their 1982 cult album The Number of the Beast, and just by that you already know this beer kicks some serious ass. 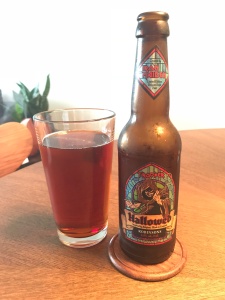 At 6.0% ABV in a 330 ml bottle, Hallowed is a Belgian inspired beer that’s brewed in England and also one of the first beers to be brewed by Robinsons Brewery that uses Belgian yeast. Furthermore, Robinsons haven’t changed the yeast used in their beers since 1942, which makes Hallowed even more special. “What makes this brew pretty special is that we’re adopting a Belgian yeast for the first time. I’m a big fan of Belgian beers, so I jumped at the chance to brew my own. While I get very excited about experimenting with new formulas and ingredients, the thing about Belgian beer is that it’s as much a way of life as it is a drink. We’ve tried to bottle that philosophy in Hallowed, albeit with a British twist”, explained Bruce. Martyn complemented Bruce’s thoughts by saying that “it’s all in the yeast. Belgian yeast yields a very distinct taste and presentation. You can sniff out a Belgian beer simply from its aromas: fruity, spicy and earthy. Belgian yeasts withstand higher alcohol levels, they attenuate well and create an array of phenolics and esters… put simply, this means more flavour and I think Hallowed drinkers are in for a treat.”

Of medium and malty style, which makes it ideal for a beef stew or cheeses, Hallowed brings vibrant aromas with vanilla, coffee, clove and floral notes, presenting on the palate notes of coffee, toasted malt and biscuit. Moreover, the crystal rye gives this dark amber, almost light brown ale a blood red hue and a smooth dry finish, having a lot of depth in malt character while the light Belgian yeast provides balance to its taste. As a huge fan of Belgian beer, I personally enjoyed a lot savoring my first bottle of Hallowed a few weeks ago, and I’m happy that I bought a few extra ones at LCBO for future occasions. If the original Trooper beer was already recommended for beer lovers (and not for heavy beer drinkers), Hallowed can be considered even more distinguished and gourmet, turning the simple act of drinking beer into a unique and very pleasant experience. Apart from LCBO here in Canada (and keep in mind not every store has it), I don’t know where else you can get Hallowed, as the product is already listed as discontinued on the Robinsons Brewery official website. Well, you should keep trying to find Hallowed in your hometown or by purchasing it online if possible, because it’s totally worth the investment, with one 330 ml bottle of Hallowed costing around 2.90 Canadian Dollars. In the meantime, you can also have some fun online by watching Bruce himself tasting Hallowed HERE, or this short but fun video by United News International where they talked about the release of Hallowed last year.