Delivering first-class music as a modern reinterpretation of sound canons declared in the mid-90’s, this Russian quartet is ready to stimulate your senses with their thrilling Industrial Metal.

If you’re a fan of the mechanized and eccentric music by renowned acts such as Megaherz, Oomph!, Rammstein, Nine Inch Nails and Ministry, I highly recommend you turn your attention to the Russian capital Moscow, where since 2015 an Industrial Metal squad known as Gottwut has been delivering first-class music as a modern reinterpretation of industrial sound canons declared in the mid-90’s. After the release of the maxi-single Oil, in 2016, Gottwut are ready to stimulate your senses with their debut full-length album, the thrilling and melodic Konglomerat. By the way, the name of the band is made up of two German words, “gott” (god) and “wut” (rage), symbolizing the creative and destructive forces embodied in human nature, an essential part of the music found throughout the entire album.

Taking as a basis energy and rage, the band comprised of Pavel Chaban on vocals, Fedor Artemenkov on guitars and samples, Vyacheslav Dmitriev on bass and Dmitry Kahatkin on drums aims at developing the genre in their own manner, paying strong attention to the visual component by designing special costumes, additional props and theatrical performances, all with the main objective of creating a unique atmosphere for the audience. Featuring a wicked, avantgarde cover art by Russian artist Denis Shoomov, Konglomerat is a feast of Neue Deutsche Härte with a more melodic Russian twist, and I’m sure each song in the album will put you to bang your head and dance like there’s no tomorrow.

Modernized sounds blended with the heavy beats and riffs from Heavy Metal are the main ingredients in the opening track My Duty, sounding even symphonic at times. Moreover, Fedor does a pretty good job with his guitar lines and samples, while Pavel delivers a poetic mix of Rammstein and Marilyn Manson through his vocals. Then we have Sin, a 90’s-inspired Industrial Metal and Rock tune where Dmitry pounds his drums in a precise manner, generating a mechanized ambience where background keyboards once again add a touch of delicacy and modernity to the music; followed by the title-track Konglomerat, sounding and feeling as industrialized as it can be and highly inspired by the golden years of Neue Deutsche Härte, something latent in the vocals by Pavel and the slashing guitars by Fedor. 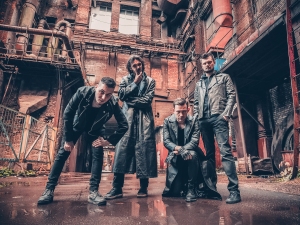 Fuck Machine brings forward one of the funniest lyrics of the entire album, and Pavel makes sure he sings them in the weirdest possible way together with the song’s crushing instrumental parts, making the final result quite entertaining. Snowman reminds me of some classic songs by Rammstein, being the perfect soundtrack for a Gothic and eccentric rock party with Fedor and Vyacheslav generating an enfolding atmosphere with their strings (and you’ll definitely feel the urge to dance in the dark to this song), whereas Cycle showcases a well-balanced mix of the modernity of Industrial Metal with symphonic elements and the catchy beats of pop music, with all band members being in total sync and with highlights to the smashing performance by Dmitry on drums. And heavy riffs and whimsical keys walk hand-in-hand in the upbeat Bi-Sides, an assembly line of Industrial Metal led by the pounding drums by Dmitry, keeping the level of electricity in the album truly high.

The band’s first single Oil brings more of their crazy sounds and the wicked vocalizations by Pavel, being tailored for fans of Neue Deutsche Härte searching for alternative bands from the independent scene, and with Fedor adding tons of adrenaline to the music with both his riffs and keys. In Angerlove we’re treated to another overdose of Industrial Metal made in Russia where Dmitry is an unstoppable crushing machine behind his drums while Pavel keeps roaring manically in our faces, therefore turning it into a mandatory song for any good Industrial Metal playlist, and closing the album we face more cutting guitars and rumbling bass lines infused with mechanized background elements in Heretic, where the band will keep hammering your head with their industrialized music until you’re completely wasted on the ground.

In a nutshell, the metallic party called Konglomerat (available for a full listen on Spotify) is a beyond awesome start for the Russian quartet, leaving a fantastic first impression for all fans of modern Industrial Metal. Hence, in order to show your support for Gottwut, go check all news and other shenanigans at their official Facebook page, VKontakte page and YouTube channel, and buy the album directly from their BandCamp page as well as from iTunes or Amazon. And now will you please excuse me, because I have a Industrial Metal party to enjoy, courtesy of four Russian metallers with genuine, mechanized German hearts.

Best moments of the album: Konglomerat, Cycle and Angerlove.

Worst moments of the album: Sin.