Bringing forth complex arrangements combined with a large dose of modern electronic music, here comes a metal unity from Poland ready to smash our senses with their debut album of incendiary Metalcore and Djent. 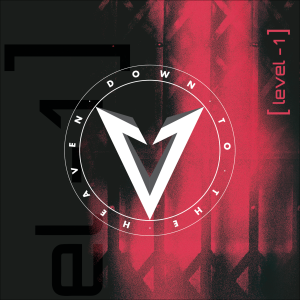 Electronicore, also known as Trancecore or Synthcore, is a fusion of Metalcore and Djent with elements of various electronic music genres, such as trance, electronica, and dubstep, with bands and artists like Attack Attack! in the United States and Enter Shikari in the UK having contributed to the development and the dissemination of the genre all over the world. Furthermore, it looks like the style has been expanding in a healthy and interesting way in recent years with the rising of bands like Switzerland’s own Rage Of Light and Polish Metalcore/Djent unity Down To The Heaven, who are releasing this year their debut album curiously titled [level -1].

Formed in 2013 in the city of Bielsko-Biała, Down To The Heaven have all it takes to become one of the references in Eletronicore and Djent. Comprised of Rusty on vocals, Shaun and Majster on the guitars, Grzela on bass, Cyfrowe Zło on keys and electronic noises, and Hoomer on drums, the band brings forth a style characterized by complex arrangements with heavy guitar playing combined with a large dose of melody and modern electronic music. In [level -1], which was mixed and mastered at Seeker Studio in Wrocław, Poland in 2017 and which features a modern and captivating artwork by Sztuczny Horyzont, this Polish six-piece act showcases all they got, being ready to smash your senses with their vicious and rumbling sounds and noises.

As if a wicked horror flick was about to begin, a creepy intro titled Down to the… gets heavier and heavier as time goes by, generating a metallic and embracing atmosphere for the demolishing Catharsis, where frontman Rusty barks deeply like a beast while the whimsical keys by Cyfrowe Zło make a vibrant contrast with the furious beats by Hoomer, resulting in a fantastic and modern hybrid between Metalcore, Industrial Metal and Melodic Death Metal. Then Shaun and Majster ignite another crushing feast of sounds named Lost in Memories with their cutting riffs, while Grzela will make your head tremble with his sick bass lines. Moreover, the music remains bold and thunderous from start to finish, proving how talented and heavy Down To The Heaven are. And putting the pedal to the metal the band blasts sheer madness and aggression in Unbroken, an excellent sample of contemporary Djent infused with elements from heavier styles where Rusty is once again demented on vocals, while Cyfrowe Zło brings insanity to the music with his keys and special effects.

Even more modernized and eccentric than its predecessors, No Vision is a movie-inspired instrumental extravaganza where its beautiful piano notes go along really well with the guitar solos and the mesmerizing atmosphere, whereas in Kingdom of Delusion it actually feels we’re “entering” a movie, with the rhythmic and tribal beats by Hoomer setting the stage for Rusty and his deranged, lunatic growls. In addition, the music evolves to a potent industrialized sounding, with both Shaun and Majster firing sheer electricity through their crisp riffs. In Tyrant’s Fall we’re treated to an explosion of modern-day Metalcore with an electronic and demented twist, led by Cyfrowe Zło and his piercing keys while Hoomer keeps pounding and smashing his drums and Rusty growls the song’s rebellious lyrics (“Arise in rage! / Image of madness / Dripping from rusty chains / Like deadly poison inside our brains / Blood under feet / Groan of tormented souls / Who’s lurking behind the Throne / BURN THEM ALL!”), before We Are, the last track of the album, continues to punch you in the head with the violent sounds extracted from all instruments, being effectively complemented by the most electronic noises of the entire album. Moreover, the song also presents clean vocals at times, making the whole experience of listening to it even more tasteful and, therefore, ending the album on a high and wicked note.

In summary, Down To The Heaven nailed it in [level -1], creating something truly unique by adding their own twist and electricity to the already innovative Eletronicore, and if you want to know more about this skillful act from Poland simply pay them a visit on Facebook for news, tour dates and other shenanigans, subscribe to their YouTube channel for more of their music, and purchase [level -1] directly from their BandCamp page or from iTunes. Put differently, if it’s fresh and modern music you’re craving, but without giving up that raw and aggressive vibe from heavy music, it’s time you get “down to the heaven”.

Best moments of the album: Catharsis, Unbroken and Tyrant’s Fall.