Witness the evolution of the music crafted by the Cox Brothers with their pulverizing new album of Progressive Death and Groove Metal.

Founded in New York City by brothers Rex Cox and Zak Cox, who share the band’s vocal and guitar duties, American Progressive Death/Groove Metal unity Uncured has been making a name for themselves since their inception in 2016 when they released their debut EP Spontaneous Generation, followed by their first full-length opus Medusa, released in 2017, which attracted international attention for its combination of technical musicianship, brutal riffs and melodic interludes. After witnessing Uncured opening for renowned acts like Soulfly and the almighty Cradle of Filth last year while promoting their 2017 album Medusa, I’m happy to say those guys stepped up their game considerably with their brand new album, the powerful Epidemic, proving that although they might still be young faces in the scene, they already play and sound like veterans.

Recorded, mixed and mastered by their father Mitch Cox at Conclave Studios, in New York, Epidemic has everything a fan of modern and technical extreme music can ask for, with its crystal clear production enhancing the impact of each song thoroughly played by the aforementioned Zak and Rex on vocals, guitars and bass (as their current bassist Spencer Metela only joined the band after the recording of the album) and Liam Manley on drums.​ The only thing I don’t understand is why they left the excellent 2018 single Terminal out of the album, but that’s just me. And besides, who said Epidemic needed that song to be brutal? I’m pretty sure the boys know what they’re doing, and based on the feedback provided by their fans so far they’re undoubtedly on the right path to stardom with Epidemic.

The opening track Desecration is fast, furious and heavy from the very first second, with the Cox Brothers showcasing all their refined skills with their sick riffs and solos while Liam smashes his drums beautifully in a powerful display of modern Progressive Death Metal, sounding at the same time very technical and visceral. If that was not crazy enough for you, in Choke they take their progressiveness to the next level, and let me say both Zak and Rex are growling and screaming a lot better than in their previous releases, adding tons of rage and insanity to the song’s lyrics (“Tear your throat out / Reject everything from within / This is imperative, all will go black / The problem lies in the silence / There will be nothing that remains, only desolation / As our civilization reverts to dust / This will surely desecrate honor”), whereas in Conquistador the band drinks from the same fountain as modern-day bands like Trivium, delivering flammable riffs and intricate beats and also exploring new grounds by adding acoustic passages and distinct nuances from other metal and even non-metal genres to their music. 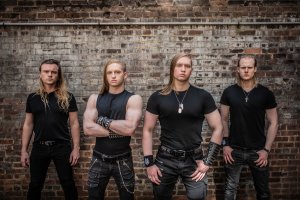 Eradicate is another feast of incendiary riffs and solos by Uncured highly recommended for slamming into the pit during their live performances, blending Melodic Death Metal with Groove Metal and an endless amount of progressiveness; followed by Death Valley, where after a serene intro the band comes crushing once again with their groovy and heavy-as-hell sounds, sounding perfect for cracking your neck headbanging and remaining as complex and vibrant as it can be until the very end. And in Resist The Infection all instruments sound absolutely pulverizing and metallic, with Zak and Rex screaming and roaring together like maniacs while Liam keeps the rhythm flowing smoothly with his beats. Put differently, although it might be the shortest of all songs, it still brings tons of stamina, feeling and rage to our avid ears.

The last batch of songs from Epidemic will crush you mercilessly, starting with Sacrifice, a classic Groove Metal tune infused with Death Metal nuances where its guitars and bass penetrate deep inside our minds, making our heads tremble. Furthermore, it feels like a hybrid of the music by Meshuggah, Tool, Dream Theater and other iconic bands, showing once again how talented those guys are. Albeit not as exciting as its predecessors, Stone Fortress is still a very good song, overflowing progressiveness, heaviness and groove, not to mention the usual crisp and piercing guitar lines by the band’s frontmen, while in Blinded By Demise the level of aggressiveness goes through the roof in another metal feast full of breaks and variations where all three band members display their refined skills in great fashion. And last but not least, after a somber, almost tribal intro Uncured attack us all one last time with more of their Progressive Death Metal in Nothing But Disease, with the music alternating between dark passages and extreme rage like the soundtrack to a psychological horror movie, ending in a creepy and captivating way.

There’s no excuse to not listen to Epidemic, as the album is available in full on YouTube, on Spotify and on the band’s official website, and after taking a good listen at it you can purchase your copy from their own BandCamp page or from their webstore in CD or vinyl format, as well as from iTunes or from Amazon. In summary, the Cox Brothers, together with Liam and Spencer, are definitely going places based on the high quality of the music found in Epidemic, presenting a huge step forward in terms of creativity, feeling and overall production after the also good Medusa. Having said that, don’t forget to follow them on Facebook and to subscribe to their YouTube channel, as we might be in front of the next big name from the modern extreme music scene with a long (and prosperous) way to go yet in their promising career.

Best moments of the album: Desecration, Eradicate and Resist The Infection.