A short and sweet stash of riffs, licks and raw emotion inoculated over the years, poured out into the world in the form of modern and thrilling Technical Death Metal.

Formed in 2019 in Stamford, a town in Delaware County, New York, United States, the unrelenting Modern and Technical Death Metal project known as Frogg has been in the works for years in the mind of Sky Moon Clark, and over the years he has been inoculating a stash of riffs, licks and raw emotion, which will now be poured out into the world in the form of the band’s debut EP beautifully entitled A Reptilian Dystopia. Comprised of the aforementioned Sky Moon Clark on lead vocals and guitars, Liam Zintz-Kunkel on rhythm guitars, Siebe Sol Sijpkens on bass, Emma Rae on keyboards and backing vocals and Anthony Barrone on drums, Frogg are one of those bands highly recommended for metalheads looking for something new and creative, especially fans of Obscura, Arsis, Necrophagist and Born of Osiris, blending the violence from classic Death Metal with modern and innovative sounds from the current music scene.

Produced and mixed by Shane Stanton, mastered by Ermin Hamidovic (Systematic Productions), distributed by Distrokid, and featuring a devilish artwork by Yann Kempen and Bertrand Lefebvree, the short and sweet A Reptilian Dystopia will certainly put a smile on your face while you headbang to each one of its four well-engendered and classy tracks. “Our EP is kind of our raw sound put on a plate without much refinement, but it’s still the basic punch and flavour Frogg has to offer. Just think of the EP as our base, while our in-the-works Album I (expected 2021/2022) will be a more fleshed out form of Frogg with an emphasized focus on the overall songs start to finish,” said Mr. Sky Moon Clark himself about the future material Frogg intend to release.

Right from the very first second in Ancient Rain we can enjoy tons of intricacy and insanity flowing from all instruments, while the song’s austere lyrics are effectively vociferated by Sky Moon (“Surrender to the ancient rain / Greed is all there is to blame / No vaccination to this strain / ‘Til earth is free of human stain / Deep below the monster waits / Under ice and time and space”). Not only that, Anthony slams his drums majestically, with the song also showcasing a great riffage sync between Sky Moon and Liam in what’s a bestial and fun feast of Technical Death Metal. Then groovier and more atmospheric than the opening tune thanks to the thunderous bass by Siebe and the whimsical keys by Emma, Nuclear Storm is a two-minute explosion of aggression and progressiveness led by Anthony’s nonstop beats and fills, maintaining the EP at a very high level of acidity and heaviness. 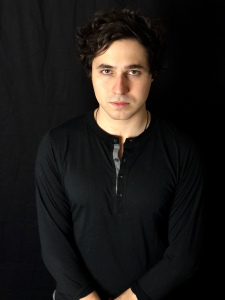 Strident guitars ignite the metallic extravaganza titled DNA, even more atmospheric than its predecessors and once again showcasing more of their cryptic lyrics (“I refuse to accept this rusty machine / As my sole source of bibliography / Further corrupting our genes / A modification delivering new geography / Dip your brain through your poison”). Put differently, it’s a multi-layered display of the band’s dexterity, with its piercing riffs being effectively intertwined with crushing beats and rumbling bass jabs, not to mention Sky Moon’s awesome closing solo as the icing on the cake. Following such dense composition we have the also amazing Ranidaphobia, which by the way means fear of frogs and toads, bringing forward sheer violence, dementia and rage in the form of Technical Death Metal by Frogg, alternating between the savagery led by Anthony’s visceral drums and the delicate keys and vocalizations by Emma, with the song’s ending being absolutely climatic for our total delight. And as a bonus to their fans, Frogg close the EP with an instrumental version of Ancient Rain, blasting our ears with their refined techniques and deep passion for heavy music.

A member of ASCAP (or the American Society of Composers, Authors, and Publishers), Sky Moon Clark and his Frogg are looking for guitarists, bassists and drummers in the New York City area to join him and Emma Rae for their live performances, and if you’re a musician looking for a good challenge the likes of Frogg simply get in touch with them on Facebook. In addition, if you want to support such up-and-coming band from New York, you can purchase A Reptilian Dystopia from the project’s own BandCamp page or from Distrokid. In a nutshell, A Reptilian Dystopia might already be a very entertaining album of metal music, but let’s not forget it’s only the first step (or maybe I should say the first leap) in the promising career of Frogg, which fortunately means we can rest assured we’ll be hearing from Sky Moon and his band a lot more in the coming years.

Best moments of the album: DNA and Ranidaphobia.