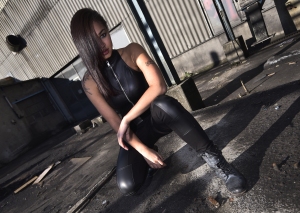 Feel the fire dancing with your soul, now you’re alive…

I honestly find impressive the huge amount of excellent metal bands hailing from the glamorous Switzerland, a country of only around 8 million inhabitants, but that has already provided the world remarkable acts such as Celtic Frost, Eluveitie, Gotthard, Hellhammer, Krokus, Sybreed and my favorite Swiss band of all time Triptykon, as well as tons of amazing underground groups already reviewed at The Headbanging Moose like Voice of Ruin, Henriette B, Way Of Changes and Black Diamonds. We already had a while ago the absolutely stunning Vanja Šlajh as our Metal Chick of the Month, and now it’s time to get back to the “Land of Milk and Honey” to pay a tribute to another fantastic Swiss metaller, a rising star named Melissa Bonny, lead singer of the up-and-coming Swiss bands Rage Of Light and Evenmore.

Born in Montreux, a traditional resort town on Lake Geneva in Switzerland, on January 23, 1993, Melissa started her life in music when she was only 6 years old by singing in a school choir for several years.  When she finished school, she spent most of her free time making music by herself or with some friends and took part in several events in her area, singing on stage, alone or accompanied. She also mentioned that one of her favorite pastimes was to make parodies of famous songs, and that the unexpected success of those parodies convinced her that she should move forward with her music career. That was when she started looking for a band, singing during a short time with a cover band from Valais, a canton in southern Switzerland, in 2012 before being recruited that same year by Symphonic Folk Metal band Evenmore as their lead vocalist, which gave her the opportunity to release her creativity while writing music and the chance to broaden her horizons and perform on great stages before well-known bands such as Lacuna Coil, Eluveitie and Xandria.

Owner of a potent and versatile voice, which allows her to sing as a mezzo-soprano or to do guttural growls the likes of Angela Gossow and Alissa White-Gluz, Melissa is highly influenced by several amazing metal acts, in special female-fronted groups like Delain, Eluveitie, Arch Enemy, Nightwish, Within Temptation, The Agonist, Amaranthe and Epica, as well as bands with a very epic and melodic sonority such as Kamelot and Sonata Arctica. For instance, among her favorite albums you’ll find several classic releases that perfectly represent her passion for dark and imposing metal music, including the albums The Black Halo by Kamelot, Origins and Helvetios by Eluveitie, and Shadows Of The Dying Sun by Insomnium. As you can see, Melissa nurtures a profound admiration for more contemporary Melodic Metal, where the music is joined by an exciting theatrical piece that became a trademark of almost all bands from her playlist.

Her list of favorite songs obviously includes many compositions found in her favorite albums, and you’ll notice that all of those songs have an epic vein, a potent punch and a detailed focus on the overall harmony. You can bang your head together with our dark-haired muse and feel the energy flowing from modern classics such as Kamelot’s March of Mephisto (featuring the one and only Shagrath, from Dimmu Borgir, as a guest vocalist) and The Haunting (featuring the stunning Simone Simmons, from Epica); Epica’s Storm the Sorrow; Arch Enemy’s You Will Know My Name; Sonata Arctica’s Only the Broken Hearts; Delain’s Get the Devil Out of Me; After Forever’s Energize Me; and my favorite from this list, The Agonist’s kick-ass hit Thank you Pain. We have to admit this is a damn good playlist of modern-day metal music, don’t you agree?

Although Melissa is already working on her own solo material, which had been left aside for several months, let’s focus on her two bands, Evenmore and Rage of Light, as those are already a reality in the world of heavy music and also where Melissa has been shining bright with her fantastic vocal range and mesmerizing looks. Let’s begin with Evenmore, a Symphonic Folk Metal band from Romont, a municipality and capital of the district of Glâne in the canton of Fribourg in Switzerland, formed in 2011 which, since its creation, has for ambition to offer its audience intense moments while listening to its musical creations. Apart from Melissa, the band is composed of guitarist Landry Pernet, bassist Frederic Jorand, drummer Florian Bard and pipes/whistles player Matthieu Bopp.

It was in June 2014 that Melissa and her bandmates from Evenmore relased their first EP, titled The Beginning, comprised of four distinct songs, including the excellent The Black Knight. Welcoming new instruments and aiming at creating a beautiful balance between metal and traditional music, Evenmore worked hard on developing their Celtic vein, culminating with the release of their first full-length album in 2016, named Last Ride, which received many positive feedback thanks to the versatility and the quality of its compositions, transporting the audience into a story that evolves song after song. From that album, you can enjoy Melissa’s unique vocals in the songs The Ride Begins, Eleana and Breaking The Silence. Furthermore, if you prefer watching the band live to actually confirm if they have what it takes to succeed in the world of metal, I recommend you go to YouTube to check some good quality footage from their live concerts, such as the songs Winter is Over at the Grande Salle de Cojonnex in Montreux in 2014, The Ride Begins at the famous Z7 in Pratteln in 2015, and also Last Breath at the Rocking Chair in Vevey in 2014. Hence, after listening to such powerful tunes, you’ll see why Evenmore already had the pleasure of sharing the stage with renowned acts like Lacuna Coil, Eluveitie and Xandria in their short but solid career.

In regards to Swiss Trance Metal act Rage of Light, this hybrid project was actually conceived several years before our ebony growler joined the band in 2015. Rage Of Light was born in 2007 from the desire of its creator, multi-instrumentalist Jonathan Pellet, to combine two music styles that he loved for a long time, those being metal and trance, inspired by the Swiss trance scene of the early 2000’s and by the sound crafted by Melodic Death Metal bands. However, due to his duties with the bands Dysrider and Nodafreth, Jonathan had to put Rage of Light aside for a few years, until reigniting it again between 2011 and 2015 by writing new material and recruiting Melissa for the vocal duties and his bandmate from Nodafreth, Noé Schüpbach, for the guitars. The trio released in 2016 their debut EP, titled Chasing a Reflection (which can be enjoyed in its entirety HERE), comprised of four original songs, Beautiful Slave, Deception, Sick and Requiem, and a cover version for Lollipop (Candyman), a hit single from the 90’s originally recorded by Danish Dance-Pop group Aqua. You can compare Rage of Light’s version with the original one by clicking HERE, but I guess I don’t even need to point out that the new version by the Swiss power trio is a billion times better.

And it seems that Rage of Light truly enjoyed giving a new arrangement and taste to a classic hit, as earlier this year they released a stunning version for Amon Amarth’s unparalleled hymn Twilight of the Thunder God, which you can take a shot at the end of this tribute to Melissa. In my humble opinion, this is the perfect example of a cover song that’s already fantastic musically speaking, but that its official video makes it even more majestic thanks to the alluring solitude and passion exhaled by Melissa up in the Swiss Alps. If I were you, I would definitely keep an eye on Rage of Light’s BandCamp page, as I’m pretty sure this very entertaining project will soon publish more of their excellent material and maybe even another vibrant cover song for an old classic.

As aforementioned, Melissa is also working on a solo project which hasn’t taken its final shape and form yet, but that doesn’t mean you cannot have a good time watching her videos from her own YouTube channel, where she covers some of her favorite bands and artists, such as these versions for Kamelot’s March of Mephisto, Hozier’s Take Me To Church and Epica’s The Second Stone. If any of these cover songs are an indication of what’s her solo project is about to be, I guess we can be more than excited for her original material then, don’t you agree?

Melissa is obviously a very normal woman with more-than-usual habits, hobbies, likes and dislikes, just like any of us. In one of her interviews, she stated that among her favorite activities besides making music and her bands we’ll find travelling, hanging out with her friends, cooking, and watching several TV shows such as Vikings, The 100 and Game of Thrones. Well, let’s say those TV shows are indeed a great source of inspiration for Melissa when writing her music and obviously when performing live, as you can see in the official videos as well as all the unofficial footage of Evenmore playing live. Who knows, maybe one day the guys from Vikings or even Game of Thrones will get to watch her amazing performances with Evenmore and Rage of Light, and we can then enjoy our Swiss Valkyrie kicking ass on one of those shows with her stunning looks and magnificent voice.

“Boredom follows me but I’m too fast!” – Melissa Bonny

3 thoughts on “Metal Chick of the Month – Melissa Bonny”