Bonded by old school and modern Thrash Metal, these German metallers masterfully unite the past, present and future of the genre in their debut album. 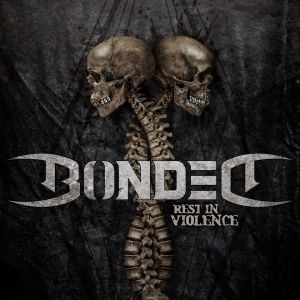 Featuring former Sodom members Bernd “Bernemann” Kost on the guitar and Markus “Makka” Freiwald on drums, as well as guitarist Chris Tsitsis (Suicidal Angels), bassist Marc Hauschild (Tauron) and vocalist Ingo Bajonczak (Assassin), German Thrash Metal squad Bonded was formed in 2018 in Dortmund, a city in Germany’s North Rhine-Westphalia region, aiming at creating nothing short of highly versatile and hard-hitting Thrash Metal with no shenanigans nor any type of artificial elements, and let’s say they more than succeeded in that with their debut full-length installment, the excellent and pulverizing Rest In Violence. Produced by Cornelius Rambadt (Sodom, Disbelief, Onkel Tom) at Rambado Recordings in Essen, Germany, ddsplaying an obscure artwork by German artist and musician Björn Gooßes (Killustrations), and featuring very special guest appearances by vocalist Bobby “Blitz” Ellsworth (Overkill) and bassist Christian “Speesy” Giesler (Extinct the Scum, Kreator), Rest In Violence will bring to your avid ears a well-balanced mix of the past, present and future of Thrash Metal, showing how much those guys love such rebellious and heavy metal style.

A Testament-inspired intro quickly explodes into melodic and vibrant Bay Area Thrash in Godgiven, where Bernd and Chris waste no time and begin slashing their strings mercilessly, resulting in a great headbanging tune to properly kick things off, whereas the even faster and more infuriated Suit Murderer is an amazing thrashing tune by Bonded bringing elements from the traditional sonority by Sodom and Destruction, where Ingo roars deeply like a maniac while Markus doesn’t stop crushing his drums not even for a single second. And featuring guest vocals by the aforementioned Bobby “Blitz” Ellsworth and guest bass by Christian “Speesy” Giesler, Rest In Violence is a bestial display of modern-day thrash where Ingo and Bobby make an infernal vocal duo while the rest of the band puts the pedal to the metal armed with their instruments of mass devastation, also blasting some wicked guitar solos for our total delight.

And there’s more of their pounding and visceral Thrash Metal in Je Suis Charlie (the slogan created by French art director Joachim Roncin and adopted by supporters of freedom of speech and freedom of the press after the January 7, 2015 shooting in which twelve people were killed at the offices of the French satirical weekly newspaper Charlie Hebdo), with Marc and Markus being responsible for keeping the “kitchen” heavy and dense, providing Ingo all he needs to vociferate the song’s austere words. Then razor-edged riffs dictate the rhythm in the also furious and groovy The Rattle & The Snake, where Markus is once again bestial on drums while Ingo keeps growling loudly and rabidly, turning it into a fantastic option for slamming into the pit and with the harmonica bringing a welcome touch of finesse to the overall musicality. Although the obscure No Cure For Life is darker and heavier than its predecessors and a good choice for breaking your neck headbanging, it looses its grip after a while, though, but nothing that would harm the album. And keep banging your heads nonstop to Where Silence Reverberates, leaning towards the vicious Groove Metal blasted by Lamb of God and with the demolishing riffage by both Bernd and Chris sounding beyond awesome; followed by Galaxy M87, where bonded get back to a more berserk mode inspired by Bay Area Thrash the likes of Exodus and Testament. Furthermore, Ingo is on fire with his demented roars, while his bandmates exhale heaviness and rage from their sonic weapons. 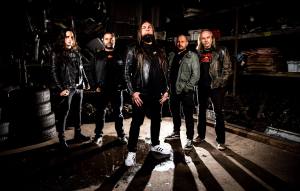 In the deranged Arrival we’re all treated to an amazing job done by the band’s guitar duo with their incendiary riffs and solos, not to mention the accelerate pace spearheaded by Markus and his venomous beats, and it looks like their circle pit extravaganza has no time to end based on the violence flowing from The Beginning Of The End, one of the bonus tracks from the album’s limited first-pressing edition CD, led by Ingo and his enraged gnarls. The entire band blasts a lesson in modern-day Thrash Metal infused with Groove Metal nuances, once again highly inspired by the most contemporary creations by thrashing masters Exodus. But wait, as there’s still more, as melodic guitar lines ignite the second bonus tracks of the CD version of Rest in Violence, entitled To Each His Own, also speeding things up and offering us fans a very good reason to crush our skull into the mosh pit, with Markus stealing the spotlight with his infernal performance on drums. Lastly, a serene, acoustic intro kicks off the introspective and grim The Outer Rim, with Ingo’s vocals getting closer to the clean voice by Soilwork’s own Björn “Speed” Strid, while Bernd and Chirs bring tons of feeling and groove to the song with their riffs and solos, ending the album in a truly powerful way.

The year of 2020 has barely started and it has already provided us all several amazing Thrash Metal albums, with Rest In Violence by Bonded being one of the most interesting and honest of all releases hands down. Hence, go check what those metallers are up to on Facebook, subscribe to their YouTube channel, and click HERE to check all places where you can grab your copy of such killer album. As mentioned in the beginning of this review, while listening to Rest In Violence I’m sure you’ll identify all influences from the past of Thrash Metal in their music while at the same time sensing a modern and fresh sound, always moving forward and never sounding outdated or obsolete. Those German guys are definitely bonded by Thrash Metal, guaranteeing a lot of fun for us fans of violence and rebelliousness in music and, above all, of our beloved mosh pits.

Best moments of the album: Suit Murderer, Rest In Violence, The Rattle & The Snake and Galaxy M87.

Worst moments of the album: No Cure For Life.