Enjoy this visionary soundtrack for our brutal, mutant universe, pushing the boundaries of Extreme Metal through the horrors of space vacuum. 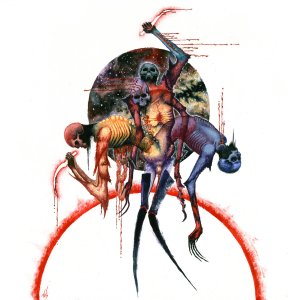 The solo project of Minneapolis, Minnesota-based vocalist and multi-instrumentalist Nick Stanger (also active in the ranks of black metallers Ashbringer), the distinguished entity named Xythlia brilliantly blends the most extreme Technical Death Metal and Grindcore with Voivod’s progressive and experimental approach and the mind-shattering guitar acrobatics of Krallice and Ocrilim, resulting in the perfect visionary soundtrack for our brutal, mutant universe, constantly changing its shape and skillfully alternating complex concatenations of schizoid death-grind riffs with short atmospheric interludes and space noises, dissonant and slanted melodies and crushing slow tempos. Engineered, mixed and mastered by Nick himself at Sound of the Northwoods in Minneapolis, and featuring a creepy and fascinating artwork by Mexican illustrator Carlos Agraz (The Art of Asty), where an alien creature performs a suicide ritual through the space and time continuum, furiously stabbing itself to death, the project’s debut album, entitled Immortality Through Quantum Suicide, testifies the birth of a new talent capable to look beyond the narrow confines of Extreme Metal, and to push it through the horrors of space vacuum. “When quarantine started, I had nothing but time to kill with a myriad of frantic uncertainty and anxiety,” explained Nick. “This record is a reflection of that. It’s a concept album that follows a character experiencing the full extent of isolation throughout infinite time.”

In the visceral opening track Death Unyielding, we already face a vile sonic devastation led by Nick’s infernal shredding, while at the same time he barks the song’s demented and chaotic lyrics (“Collider, a force that could wield the aeons / The secret to transcending time / Death will always show / Rearing its ugly head / Chaos, the beast unfolds / Devouring what’s left of this world / Day of reckoning / Waking nightmare / Chaos reigning / Death unyielding”), flowing into the also demolishing To Defy Inevitability, a lesson in Grindcore the likes of Napalm Death which also presents groovier and more atmospheric moments than its predecessor. In Initiation: Void we’re treated to thirty seconds of insanity in the form of sick riffs and blast beats, morphing into a Technical Death Metal havoc titled Tachyon Malnourishment, where Nick’s growls get more and more violent as the music progresses, with his riffs and bass punches sounding utterly metallic. Then in Antidream serene guitar lines work as the calm before a metal storm titled Ablation of Subconscious, starting in a more introspective way with Nick of course roaring like a beast while at the same time smashing his guitars and bass mercilessly, accompanied by his programmed but very organic drums in the most technical and progressive form of Grindcore you can think of.

Flesh Prison sounds infernal, rumbling and hammering from start to finish, with Nick’s riffs setting fire to the music, boosted by his thunderous bass jabs and the song’s wicked words (“Damnation / An eternity of peril / No end to suffering / Clench my fist / One more click / Body frail / Frantic mind”), whereas Post-Ironic Indoctrination is probably one of the most insane and disrupting minutes you’ll ever experience in heavy music. And that musical madness goes on in Schrödinger’s Foreskin, bringing elements from bands like Slayer and Exodus to Nick’s already hellish sound, not to mention the demented progressiveness he extracts from his violent bass, followed by The Eye Bath, another atomic bomb delivered by our lone wolf in a little over three minutes where he doesn’t stop slashing his guitar not even for a single second, therefore making your head tremble vigorously. After another round of sheer dementia titled Mutagenic Growth, it’s time for the closing tune Fester in the Nether, showcasing an eerie intro gradually evolving into more of Nick’s Technical Death Metal, blending furious riffs and beats with a reverberating bass sound. Furthermore, Nick definitely knows how to make the earth shake with his technical Grindcore, always vociferating rabidly to make things even heavier and more sinister.

Nick and his wild Xythlia are waiting for you to exterminate your senses in Immortality Through Quantum Suicide, and in order to show such insane entity of Technical Death Metal and Grindcore your support simply follow Xythlia on Facebook and purchase your copy of the album from the project’s own BandCamp page, from the I, Voidhanger Records’ BandCamp page, or from the Metal Odissey webstore. Nick might be one single man enduring isolation just like the rest of us, but we must admit he made an excellent use of his time alone to bring his unrelenting Grindcore beast to life in Immortality Through Quantum Suicide, condensing all the horrors, darkness and fears from space vacuum into a massive wall of sounds that will leave you absolutely disoriented after the album’s 23 crushing minutes are over. Let’s hope we can witness a second round (or maybe I should say reincarnation) of Xythlia in the near future, pushing the boundaries of extreme music more and more into the unknown, exploding our heads with his austere sounds for centuries to come.

Best moments of the album: To Defy Inevitability, Flesh Prison, Schrödinger’s Foreskin and Fester in the Nether.

Released in 2020 I, Voidhanger Records