Raise your swords and enjoy this epic album of Melodic Death Metal that will make you want to bang your head while beating the living shit out of magical creatures. 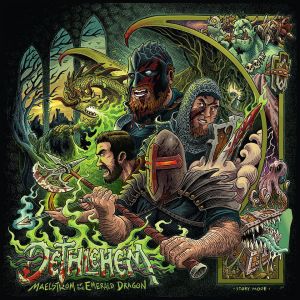 Hailing from Ghorusalem (it’s actually Pittsburgh, a city in western Pennsylvania, in the United States, but please bear with us), the warriors of Dethlehem have traveled through time and space to fight against dragons, wizards, warlocks, leviathans, shape-shifters and a shit ton of other things that needed to die since their inception in 2008. Despite the gimmick, it would be a big mistake to think that Dethlehem’s sound is no more than a witless joke. Truth be told, once you enter their realm you’ll face some good and epic Melodic Death Metal, as the fourth full-length opus from this four-piece army formed by Brutalitus the BloodBeard on vocals, Paladin Bovice on the guitars, Ranger Grimshaw Longfellow on bass and Overlord Brom on drums, entitled Maelstrom of the Emerald Dragon, harnesses the spirit of old whilst drawing from the power of modern Death Metal, creating a multi-layered sound that becomes even more compelling if you go full Dungeons & Dragons with the “Story Mode” edition of the album. Featuring an original artwork by American artist Joe Mruk (Red Buffalo Illustration), Maelstrom of the Emerald Dragon presents a band that has truly stepped up their game, sounding tighter and more technical than ever, showcasing a more progressive take on Death Metal and covering a lot of ground on an album that will make you want to bang your head while beating the living shit out of magical creatures.

And the story begins with Prelude – As Fate Would Have It, where acoustic guitars permeate the air before all hell breaks loose in A Tale That Time Forgot, with all band members blasting ass-kicking Melodic Death Metal sounds led by the raspy roars by Brutalitus, also bringing forward some good breaks and variations, a considerable amount of progressiveness and endless epicness. Although I understand Interlude I – Cloud Megalopolis is the explanation to the beginning of the adventure, it’s way too lengthy for people like me who prefer music rather than talking, sounding like one of those frustrated Manowar interludes from their latest albums; however, back to what really matters, which is metal music, the quartet fires another berserk, groovy and heavy-as-hell tune titled Return to the Halls of Madness, where Overlord Brom does an amazing job pounding his drums with strength and fury accompanied by the scorching riffs by Paladin Bovice, and they keep smashing their instruments in Mind Flayer, where Paladin Bovice’s guitar lines walk hand in hand with the rumbling and groovy bass by Ranger Grimshaw Longfellow, also bringing an Iron Maiden-ish vibe to make things even more vibrant.

Interlude II – Task for the Bog Witch is another interlude to advance the storyline, shorter and more entertaining with a lot of special “characters”, setting the stage for Escape From Wolf Mountain, a lot heavier and also more metallic than its predecessors, with Brutalitus growling manically and, consequently, injecting more adrenaline to the story being told, while Overlord Brom fires classic, furious beats nonstop, followed by the also frantic Beware the Mimic, showcasing a flammable fusion of classic Death Metal with Epic and Melodic Death Metal where once again Paladin Bovice shreds his strings in great fashion, all spiced up by the song’s old school lyrics (“Terrorize / In the rivets and wood lives teeth and eyes / Biding time / Ready to strike and dissolve your insides / This quagmire in plain sight / The treasure it holds is…”). After another decent bridge titled Interlude III – A Ravenous Storm where the heroes interact with a couple of funny giants, it’s time for a brutal extravaganza titled On the Backs of Giants, with sheer epicness flowing from its lyrics (“We rode on the backs of giants through the snow / Making our way through fractured ice / This journey lumbers on”) while all band members craft another vibrant and dark ambience with their respective instruments.

Gelatinous Cube Labyrinth is perhaps the most modernized tune of the album, with its guitars and bass at the same time piercing your mind and punching you in the stomach, flirting with Progressive Death Metal while Paladin Bovice adds a touch of awesomeness to the overall result with his sick guitar solos, whereas Interlude IV – Welcome to Your Doom is obviously another interlude preparing the listener for the final chapter of the story, with our heroes facing a witch and a dragon in The Emerald Dragon, bringing to our avid ears over seven minutes of melodic passages, clean and harsh vocals, thunderous bass punches and crisp guitars, while Overlord Brom sounds absolutely mental on drums from start to finish, flowing smoothly until its epic conclusion and setting the tone for the outro Interlude V – Cyclical Past, putting an interesting conclusion to the album while making the heroes “aware” of “the listeners”, leaving us all eager for more of their fantasy stories. Well, as it’s mentioned during the outro, the story is “to be continued”, which means we’ll hear a lot more from those dauntless metal warriors in a not-so-distant future.

There are actually two versions of the album available, one with no theatrical interludes for those who just want the music, and the full experience presented in the form of the semi-cohesive story that intertwines with the musical tracks, as reviewed above. You can stream the simpler version with no interludes in full on Spotify or purchase it from the band’s own BandCamp page, from Apple Music or from Amazon, or you can prove yourself a true metalhead, grab your sword and shield, and buy the full Story Mode version of Maelstrom of the Emerald Dragon also from their BandCamp page. In addition, don’t forget to join Dethlehem in their quest for metal by following them on Facebook, on Instagram, and by subscribing to their YouTube channel, staying up to date with all things Dethlehem, knowing where their next battles (or live concerts, if you prefer) will happen, and getting useful tips on how to ride giants while fighting witches and dragons at the same time you listen to their crushing and modern extreme music.

Best moments of the album: A Tale That Time Forgot, Escape From Wolf Mountain and On the Backs of Giants.

Worst moments of the album: Interlude I – Cloud Megalopolis.