Behold this epic tale about a great battle between men and the undead in the form of the pulverizing Death Metal crafted by an uncanny Belgian horde. 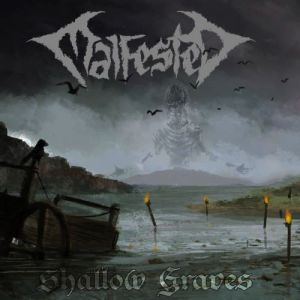 Forged in the fires of Kortrijk, a Belgian city and municipality in the Flemish province of West Flanders, in 2020, the year of “the great plague”, the unrelenting Death Metal unity known as Malfested released on November 2, the famous “Day of the Dead”, their debut EP entitled Shallow Graves. Highly inspired by renowned acts the likes of Bloodbath, Deicide and Carnation, the band comprised of Arne on vocals and Niels on the guitar, as well as other anonymous members, offers in Shallow Graves an epic tale about a great battle between men and the undead, where they have to find a way to stop this overwhelming evil. Recorded, mixed and mastered by Cyril Hostyn, Shallow Graves exhales aggression, anger and heaviness just the way we like it in classic Death Metal, leaving us completely disoriented after the album’s 21 minutes of vicious music are over. Put differently, simply hit play and head into the violent and merciless battlefield side by side with those uncanny Belgian metallers in the name of our good old Death Metal.

Flies buzzing and the stench of dead bodies ignite the vicious onrush of old school Death Metal titled Shallow Graves, where Arne vociferates rabidly and deeply accompanied by the Hardcore-infused riffage by Niels, and whoever is playing the drums is a true metal beast. And you better be physically prepared as they keep hammering our heads and haunting our souls with their undisputed fusion of old school and modern-day Death Metal in Masked with the Skulls of the Fallen, where once again Arne’s growls and snarls sound beyond brutal, building an instant and visceral connection with the pulverizing Fields of Bloodshed, showcasing austere lyrics (“One wounded man had made it out – to the tell the tale before he bled out / Like fire the word spread through the land – a whole town crushed by a demon hand / Summon the fearless – send them out to investigate / Expose the demons – that only live in old wife’s tales”), frantic beats and the trademark scorching riffs by Niels.

I the excellent Venefica (The Banished One) we’re treated to a sick and thrilling display of savagery and hatred in the form of Death Metal by Malfested. Moreover, Arne and Niels must be really proud of the stone crusher they called to be their drummer, resulting in the perfect combination of evil sounds tailored for slamming our skulls into the circle pit. Then leaning towards the darkest form of Death Metal you can think of, you can sense sheer rage flowing from Arne’s guttural roars in Incantations, while the music remains as bestial and aggressive as possible, not to mention the demolishing but at the same time melodious riffs by Niels. Finally, Malfested show no mercy for our necks and souls as they offer our ears another infernal tune titled Cistern of Souls, inspired by the glory of 90’s Death Metal the likes of Deicide, Morbid Angel and Death, among several others, and as soon as it’s over you’ll feel desperate for more of their violent music.

I guess I don’t need to say Malfested are here to stay based on the high quality of the music found in Shallow Graves, right? Those Belgian metallers are on fire throughout the entire EP, which by the way can be enjoyed in its entirety on YouTube and on Spotify, pointing to a bright (and demolishing) future ahead of them. Hence, don’t forget to follow those cryptic musicians on Facebook and, above all, to purchase a copy of Shallow Graves from their own BandCamp page. Will Arne, Niels and their henchmen win their battle against the undead armed with their undisputed Death Metal? Only time will tell, but until then we can rest assured Malfested will continue to decimate our senses with their wicked and perverse creations, elevating the name of their homeland in the underworld of extreme music.

Best moments of the album: Shallow Graves and Venefica (The Banished One).

* There’s no information available about the other band members.