Rocking since they were teenagers in punk, metal, prog and rock bands, this fantastic Dutch four-piece act is ready to kick some ass armed with their electrifying debut opus.

Rocking since they were teenagers in punk, metal, prog and rock bands, Roosendaal, Netherlands-based Hard Rock/Stoner Metal act Hvalross, which is by the way the Norwegian word for “walrus” (and don’t ask me why they opted for such distinct name for their band), was born in 2018 after lead singer Gerben van Oosterhout, guitarist Barry Veeke, bassist Maarten Vermeulen and drummer Tristan de Rijk decided to end their three-year musical break to make great hard rocking music together. Heavily influenced by bands such as Mastodon, Judas Priest, Gojira, Black Sabbath and Iron Maiden, but of course with their own Dutch twist, Hvalross have just unleashed upon humanity their debut album, entitled Cold Dark Rain, offering fans of Doom, Stoner and Southern Metal a very good reason for raising their horns and bang their heads to the sound of nine original, heavy-as-hell and groovy compositions in the span of 35 intense minutes.

And it’s time for the quartet to kill in the opening tune Death From Above, a headbanging extravaganza led by the classic riffage by Barry and the pounding beats by Tristan, or in other words, a fusion of old school Hard Rock the likes of AC/DC with heavier and groovier styles that will please all fans of our good old Rock N’ Roll. In Trenchfeet the band sounds clearly inspired by 80’s Heavy Metal infused with Stoner and Doom Metal elements, with Gerben sounding truly epic on vocals supported by the spot-on backing vocals by Maarten. There are no shenanigans nor any artificial elements, it’s straightforward rock music made in the Netherlands for our total delight, and they keep venturing through the realms of Southern Rock and Metal in Finally Repent, where Barry and Maarten make a dynamic stringed duo while Gerben keeps singing with tons of passion. Then I Shot My Best Friend presents a curious name for a high-octane feast of metallic riffs, low-tuned bass jabs and frantic beats, sounding and feeling like an European version of Mastodon with Barry going full progressive on the guitar, while Tristan doesn’t let the level of energy go down not even for a single second.

There’s more of their solid and electrifying rock music in Oblivion, bringing to our ears another round of Gerben’s classic Hard Rock vocal lines accompanied by the groovy bass by Maarten, therefore keeping the album as vibrant as it can be; followed by The Owl, a more melodious and psychedelic tune by Hvalross that will take you on a journey through the 70’s and 80’s to the sound of their strident riffage, rumbling bass and classic beats, with Tristan once again stealing the spotlight with his refined technique. As I Am is a truly neck-breaking Stoner Rock and Metal exhibit by the quartet, blending the groove by Mastodon with the obscurity of Black Sabbath and sounding very detailed from start to finish, with Gerben kicking ass yet again on vocals, whereas the quartet puts the pedal to the metal in the thrilling Playing The Big Game, presenting nonstop sonic action by all band members with Gerben’s vocals being boosted by the incendiary riffs by Barry and the crushing drums by Tristan. Lastly, a more sinister side of the band is showcased in the closing tune Geryon, which despite being another solid and detailed composition it’s not as electrifying as the rest of the album. Maarten’s thunderous bass will punch in the head mercilessly, though, enhancing the song’s impact considerably. 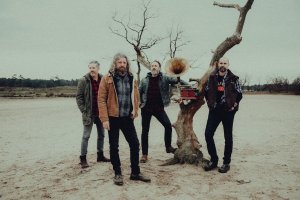 After all is said and done, we must all admit Gerben, Barry, Marteen and Tristan were absolutely precise throughout the entire album, available for a full listen on Spotify, blending elements from all of their rock and metal heroes while at the same time crafting something unique that sounds like Hvalross and nothing else. Hence, as we all love when a band is capable of uniting their passion for heavy music with endless creativity and feeling like the guys from Hvalross did in Cold Dark Rain, let’s show our true support to them by following the band on Facebook and on Instagram, and obviously by purchasing their newborn opus from their own BandCamp page. And may the walruses of Hard Rock and Stoner Metal keep hammering our heads with their amazing music with countless more albums through the years.

Best moments of the album: Death From Above, I Shot My Best Friend and Playing The Big Game.

Worst moments of the album: Geryon.