A merciless Vancouver-based Death and Thrash Metal unity is ready to strike us all once again with their newest opus, representing four years of solid work ethic and unwillingness to compromise even in the slightest.

What’s in a name? Everything. And Vancouver, Canada-based Death/Thrash Metal unity Without Mercy certainly stays true to its name. Ruthless and menacing, these Canadian metal titans have cultivated a fusion of death and thrash, a sound that shows off the band’s respect for and dedication to both genres since their inception in 2004, being highly recommended for fans of the fulminating music by Cattle Decapitation, Meshuggah, Whitechapel and Pantera, among others. Now in 2020, the band comprised of Alex Friis on vocals, DJ Temple on the guitars, Ryan Loewen on bass and Matt Helie on  drums is ready to strike once again with their sophomore full-length effort Seismic, representing four years of solid work ethic and unwillingness to compromise even in the slightest. Produced by DJ Temple himself, mixed and mastered by Dave Otero at Flatline Audio, displaying a venomous artwork by Canadian artist Brayden Eshuis, and featuring very special guests Jeff Loomis (Arch Enemy, Nevermore) and Chris Broderick (Act of Defiance, Megadeth, Jag Panzer), Seismic will go straight for your jugular, offering you the most visceral fusion of Death, Thrash and Groove Metal you can think of.

With guest Jeff Loomis blasting one of his trademark, incendiary guitar solos, Thunderbird is an explosion of Thrash and Groove Metal the likes of Lamb of God and Meshuggah where Matt is bestial with his blast beats while Alex sounds like a rabid creature on vocals, and continuing their path of progressiveness, heaviness and rage, DJ Temple fires razor-edged riffs supported by the rumbling bass by Ryan in Abysmal, highly recommended for fans of Progressive Death and Thrash Metal. What DJ Temple does with his axe in the next song, titled Left Alone, is truly impressive, resulting in a lesson in intricacy and violence accompanied by his infuriated band members, and the final sound couldn’t have been more demented and sharper than what it already is; whereas Alex’s deranged roars and gnarls will penetrate deep inside your mind in Wiindigo, while Matt and Ryan make sure the earth trembles to the sound of their respective beats and bass jabs in another solid fusion of modern-day Death and Groove Metal.

Then it’s time for Chris Broderick to provide a sick guitar solo in Disinfect The Soul, a metal beast brought into being by this insane squad showcasing austere, in-your-face words barked by Alex (“Thank God there’s only one of you / I’m striving for a better form of survival / THE MEANS AREN’T AVAILABLE without the threat / I finally understand what could make a man run / Chasing my tail, I have it now / SO MUCH WORSE than first thought”), while in The Disaster the thrashing riffs and solos by DJ Temple are amplified by the crushing drums by Matt, or in other words, it’s a straightforward tune that will inspire you to slam into the circle pit like a maniac. Possessed brings forward another explosive round of their trademark music, feeling and sounding absolutely berserk from start to finish, and with Alex being once again demonic with his sick gnarls, presenting elements from the darkest forms of Death, Thrash and Groove Metal you can think of. I Break The Chain, the second to last blast of infernal metal music by Without Mercy, feels like a more deranged version of Gojira infused with the austerity of Cattle Decapitation, meaning it will hammer your heads mercilessly until the very end, before the band closes the album with Uprooted, presenting beautiful, darkly poetic lyrics “declaimed” by Alex (“To dream of the earth dying is nothing new / To watch in awe of its beauty is something I don’t do / To hold a dead bird in my hand and demand it sing / To hold a gift in my hand and not feel a thing”) while the music remains as acid and pulverizing as possible, spearheaded by DJ Temple’s scorching riffage and the always demented beats by Matt. 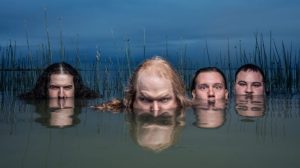 The Death and Thrash Metal landscapes might seem a bit too saturated for a lot of fans from all over the world, but let’s say Without Mercy managed to sound unique and fresh throughout Seismic, turning it into a must-listen to anyone who enjoys some well-engendered extreme music while at the same time loves to slam his or her cranial skull into a frantic mosh pit. Hence, you can show your support to those brave Canadian metallers by following them on Facebook and on Instagram, by subscribing to their YouTube channel, by listening to more of their infernal creations on Spotify, and specially by purchasing your copy of Seismic from their own BandCamp page (or simply click HERE for all locations where you can buy or stream the album). In the beginning of this review it was mentioned that the name of the band, Without Mercy, says it all about their music. Well, the same can be said about the album name, as this is a true headbanging, thrashing earthquake made in Canada that will leave you completely disoriented after all is said and done, exactly the way the band had in mind. Yes, my friends, there’s indeed a mission accomplished in the name of death and thrash here.

Best moments of the album: Left Alone, Possessed and Uprooted.

Worst moments of the album: Wiindigo.