Turkish torchbearers of diabolical abomination return with their first-ever full-length opus, blasting our souls with eight tracks of unrelenting and savage Death Metal raids that will just leave you mouth-watering for more. 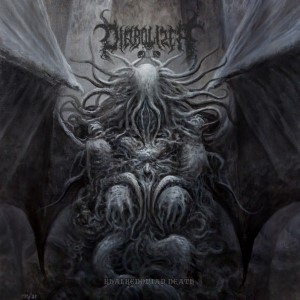 Turkish torchbearers of diabolical abomination Diabolizer are finally back with their debut album Khalkedonian Death, the follow-up to their critically acclaimed EP’s Shadows Of Impending Decimation (2012) and Apokalypse (2016), offering fans of bands the likes of Sinister, Hate Eternal and Deicide eight tracks of unrelenting and savage Death Metal raids that will just leave you mouth-watering for more. Recorded, mixed, mastered by Ozan Yıldırım (Deadhouse Studio) and displaying a sick, demonic cover painting by Jon Zig, Khalkedonian Death is by far the most pulverizing and complete effort by this Kadıköy, Istanbul-based horde comprised of Abomination on vocals, Mustafa and Can on the guitars, Malik on bass and Aberranton drums, not only positioning the band as one of the driving forces of the extreme music scene in their homeland, but also helping spread the burning fires of Turkish metal to all four corner of the earth.

The opening track Dawn Of Obliteration is absolutely infernal and devastating from the very first second, with Aberrant being merciless behind his drums while Abomination arises from the pits of hell with his trademark roars. Put differently, this is Turkish Death Metal at its finest, which is also the case in Maelstroms Of Abhorrence, where Abomination manically growls the song’s wicked lyrics (“As if trapped in singularity / Countless relics I behold / Seconds are aeons / My mind is drifting”) while Mustafa and Can extract sheer malignancy and hatred from their stringed weapons; and it’s time to bang your fuckin’ heads to the demented Cloaked In An Aura Of Madness, a lesson in Death Metal by the quintet where Malik’s rumbling bass and Aberrant’s classic beats bring the groove to the band’s usual demolition for our total delight. Then more of their demented and Stygian music invades our ears in the steamroller tune Mayhemic Darkness And Possessed Visions, living up to the legacy of old school Death Metal, and with the band’s guitar duo delivering sick Cannibal Corpse-inspired riffs nonstop.

And there’s no sign of slowing down for those ruthless metallers; quite the contrary, Diabolizer continue to crush our senses in Sulphuric Vengeance, another pulverizing lecture in Turkish Death Metal where Abomination’s gruesome growling walks hand in hand with the vicious drumming by Aberrant, whereas the riffage by Mustafa and Can will penetrate deep inside your putrid skin in Bringers Of Khalkedonian Death, a massive, disruptive tune that invites us all to slam into the circle pit like rabid metal maniacs. Spearfuck The Throes Of Treason, their second to last blast of obscurity and rage, will inspire you to break your neck in half headbanging, with Malik hammering his bass nonstop while Mustafa and Can alternate between sheer savagery and somber moments on the guitars. Lastly, ending such intense and hellish album of death it’s time for the quintet to haunt our souls with Perishing In His Oceans Of Blood, showcasing grim riffs, wicked solos, guttural vociferations and pounding drums, or in other words, everything we love in savage Death Metal.

If you consider yourself a true metalhead and are ready to carry the torch of Turkish Death Metal together with the guys from Diabolizer, you can start following the band on Facebook and on Instagram for news, tour dates and so on and, of course, above all that, purchase your copy of one of the best Death Metal albums of the year from the band’s own BandCamp page, from the Everlasting Spew Records’ BandCamp page or webstore, from the Me Saco Un Ojo Records’ BandCamp page, from the Desiccated Productions’ BandCamp page, and soon from Apple Music and Amazon. Diabolizer have been solidifying and perfecting their sound with each one of their releases, and their first ever full-length opus perfectly summarizes everything the band stands for. As a matter of fact, the band’s hometown Kadıköy used to be called Khalkedonia (which means “the land of the blind”) by the Byzantines, showing Diabolizer’s masterplan with their newborn spawn has always been to warn the entire world Khalkedonian Death Metal is among us to stay.

Best moments of the album: Dawn Of Obliteration, Cloaked In An Aura Of Madness and Bringers Of Khalkedonian Death.

Worst moments of the album: None, of course.