After a long period of inactivity, this promising Vancouver, Canada-based Death Metal unity is back in action and ready to kill armed with their debut full-length album. 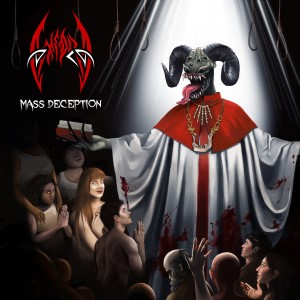 Formed in Russia in 2008 by the “Garipov Brothers”, those being vocalist and guitarist Ramil Garipov and guitarist Ilnur Garipov, Death Metal unity Axedra played only a few shows in their hometown before they had to disband when both of them moved to the city of Vancouver in British Columbia, Canada in 2010. After a long period of inactivity, they finally gathered their material, put together a full-bodied band with Logan Jarred Charron on bass and Daniil Volovik on drums, and recorded their debut album Mass Deception, released now in 2021. Mixed and mastered at Death Culture Studio and displaying a bloody, cult-like artwork by Joyce Peng, the first official effort by Axedra will smash you like an insect with its old school Death Metal approach, being therefore recommended for admirers of the gore and destruction blasted by bands such as Cannibal Corpse, Deicide and early Decapitated.

Get ready for an infernal hurricane of old school death in the opening tune Momentary Control, a visceral welcome card by the quartet where Ramil begins his growling attack accompanied by the crushing beast by Daniil, whereas speeding things up they offer our ears the slamming hymn Buried Alive, showcasing classic Death Metal riffs by the band’s guitar duo and vile lyrics barked by Ramil (“Awoken by the deafening silence / Blinded by the absolute fiery darkness / Dampened air tastes decrepit / Restricted mind within fibromyalgic body”). Then the title-track Mass Deception will bring to your putrid ears two and a half minutes of sheer savagery led by the scorching riffage by Ramil and Ilnur, while Logan hammers his bass mercilessly, and it’s time to slam into the circle pit to the sound of Apocalypse, a straightforward, thunderous creation by Axedra where Daniil dictates the pace with his fierce and rhythmic beats.

Axedra keep destroying everything and everyone that crosses their path in Infectious Insanity, a pulverizing Death Metal feast where the riffage by Ramial and Ilnur is as demented as it can be, followed by Parasitic Nightmare, showcasing apocalyptic words vociferated rabidly by Ramil (“Wake, see your world turn into a parasitic nightmare / Left a wasteland, there’s no retreating / Soon you’ll find your soul is bleeding / Trapped, your dream is now a burden / Watch this planet contort and worsen”) while Logan and Daniil make the earth shake with their sharp and thunderous instruments in a lesson in violence and hatred. Are you tired already of their sick and heavy sounds? Because you better be prepared as the quartet will kill once again in Thought Corruption, offering us all a huge dosage of the old school, pounding drums by Daniil. And last but not least, it’s time for Hellbringer, a solid composition by the band that keeps the album flammable and demonic, albeit not as dynamic as the other songs.

In a nutshell, in Mass Deception, which is by the way available in full on YouTube, Axedra don’t aim at reinventing the wheel as you can see, but at keeping the fires of classic Death Metal burning bright thanks to the talent, hard work and aggressiveness of the band spearheaded by the Garipov Brothers. Hence, don’t forget to show them your support by following the band on Facebook, on Instagram and on VKontakte, by subscribing to their YouTube channel for more of their heavy-as-hell music, and above all that, by grabbing your copy of Mass Deception from the band’s own BandCamp page. I’m beyond certain you’ll have an amazing time slamming and banging your head nonstop to the first-class Death Metal crafted by Axedra, leaving you eager for more from those Canada-based Russian brothers in a not-so-distant future.

Worst moments of the album: Hellbringer.