Do you know how to slaughter a lamb? If not, let these three Canadian metallers teach you that to the sound of their intense and frenetic debut album.

Made up of vocalist Friendly Rich Marsella (Friendly Rich, The Lollipop People) and guitarists Greg Dawson (Olde, Grale) and Billy Curtis (The Abandoned Hearts Club, Cunter), and featuring an array of special guests the likes of Damian Abraham (Fucked Up), Kenny Bridges (Moneen), Greg Wright (Shatterpoint) and Luke Roberts (Gargoyl), Brampton, Canada-based newest metal supergroup Head of Jeddore is ready to kick some ass with their debut album entitled How to Slaughter a Lamb, offering up a slab of sophisticated mayhem for fans of Mr. Bungle, System of a Down and the (more adventurous) Melvins. Recorded, mixed and mastered by Greg himself at BWC Studios, How to Slaughter a Lamb brings to our ears an intense and frenetic metal attack, tapping into a wide variety of musical influences that goes from Stoner and Doom Metal to more modern styles such as Groove and Alternative Metal, while staying fierce and fiery throughout its 31 minutes of music.

The title-track How to Slaughter a Lamb kicks off at full speed with Mr. Marsella delivering demented vocal lines à la Mike Patton while Billy and Greg fulminate our ears with their rockin’ riffs, and more of their sonic insanity comes in the form of Into the Well, bringing elements of the Progressive and Groove Metal blasted by bands like Gojira and Mastodon and with its intricate and visceral drums adding an extra touch of aggressiveness to the overall result. Back to a more straightforward, in-your-face mode, the trio offers our ears the groovy The Age of Entitlement, where once again Billy and Greg feed Marsella with everything he needs to vociferate like a rabid creature; whereas sick guitar riffs and solos will pierce your mind without a single drop of mercy in The Tragedy Network, while we face at the same time a humongous amount of rage and lunacy through the band’s classic beats and vocals. And slowing things down a bit and adding elements from Alternative Metal to their core sonority, it’s time for another wicked musical voyage with Head of Jeddore titled Let Me Rot, where Marsella is once again bestial on vocals.

The trio continues to haunt our damned souls with their high-octane fusion of rock and metal styles in Kathmandu, reminding me of the early days of System Of A Down, with Billy and Greg giving a lesson in how to pulverize their stringed weapons, while Blood Waltz is another demolishing, awesome composition by those Canadian metallers offering us all a hybrid of Stoner and Doom Metal with Progressive Metal that will certainly please any fan of good music worldwide. Then showcasing a Children of the Grave-inspired riff it’s time for Marsella to growl and roar manically once again in The Old Man and the Sea, a song that will certainly put you to bang your head nonstop together with the band; and their Mastodon vein arises one more time in Peepholes and Moles, also presenting hints of the sick creations by Faith No More, not to mention the kick-ass riffs by the band’s talented guitar duo beautifully accompanied by the song’s hammering drums. And finally, a Death Metal-inspired gnarl ignites the closing tune The Bake Sale, before all hell breaks loose one last time inviting us all to slam into the circle pit until its vile and sluggish grand finale. 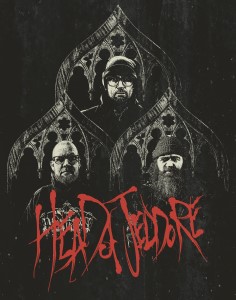 In summary, if you consider yourself a true explorer of the world of rock and metal music, you should definitely give the guys from Head of Jeddore a shot. This talented Canadian act offers in their new album everything you can imagine in terms of creativity, heaviness, insanity and more, positioning them as one of the best new names of the Canadian scene. Hence, don’t forget to show them your love by following them on Facebook and on Instagram to stay up to date with all things Head of Jeddore, and even more important than that, by purchasing a copy of their sick new album by clicking HERE. And who knows, maybe one day those metallers from the Great White North will actually teach you how to slaughter a lamb.

Best moments of the album: How to Slaughter a Lamb, Kathmandu and Blood Waltz.