This amazing Ukrainian doom horde returns from the underworld with over 50 minutes of music covering the catharsis that a person goes through in a moment of despair and hopelessness. 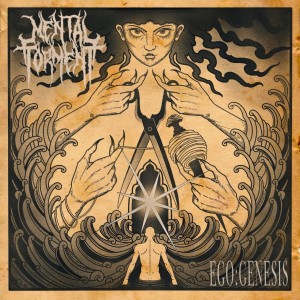 Forged in the fires of Kiev, Ukraine back in 2009, the Stygian Death and Doom Metal entity known as Mental Torment returned from the ashes like a dark phoenix in 2020 after a five-year hiatus to crush us all once again with their undisputed Funeral Doom Metal, resulting now in 2021 in their sophomore effort titled ego:genesis. Bringing to our avid ears over 50 minutes of doom split into seven distinct tracks, ego:genesis covers the catharsis that a person goes through in a moment of despair and hopelessness, searching for answers to eternal questions, resisting the inevitable and final acceptance of their fate, all carefully brought into being by Roman Sagajdachnyj on vocals, Anatolii Doroshenko and Mykhailo Chuha on the guitars, Andrii Avramets on bass, Yaroslav Mosiievsky on keyboards and Artur Myrvoda on drums, being therefore highly recommended for fans of the music by October Tide, Paradise Lost, Anathema, Katatonia and Swallow the Sun, among other torchbearers of pure doom.

The gentle, melancholic keys by Yaroslav kick off the eight-minute aria Acceptance, already showcasing the band’s passion for doomed and obscure music, before Artur begins hammering his drums with tons of anger. Needless to say, fans of bands like  Paradise Lost and My Dying Bride will certainly love it. And the strident and piercing guitars by Anatolii and Mykhailo set the tone in the sluggish and grim New Days Old Wounds, accompanied by the thunderous bass by Andrii and, therefore, offering Roman all he needs to vociferate and roar in the best Doom Metal way possible; whereas Yaroslav strikes again with his sinister keys in Untitled, before the music explodes into a slow and heavy-as-hell fusion of Death and Doom Metal spearheaded by the classic drums by Artur while the growls by Roman get more anguished and desperate as the music progresses.

Even heavier and more demonic than its predecessors, the multi-layered Conclusion will crush your damned soul mercilessly to the sound of the vicious guttural by Roman and the crisp guitars by Anatolii and Mykhailo while Andrii keeps smashing his bass flawlessly, and more of their delicate but at the same time caustic Funeral Doom Metal is offered to us all in The River, with the gruesome roaring by Roman generating a Stygian paradox with the whimsical piano notes by Yaroslav. Then keeping the album as doomed and infernal as possible, the band once again slams our heads with their boisterous music in Black, with Roman taking the lead once again with his deep growling while his bandmates add a touch of progressiveness to the overall result, followed by the closing tune Oblivion, an instrumental outro where the band’s guitar duo delivers a stunning stringed performance supported by the stylish beats by Artur, blackening the skies one last time for our total delight.

If you love funereal and melodic Doom Metal from the bottom of your damned heart, you should definitely start following Mental Torment on Facebook, on Instagram and on VKontakte for news, tour dates and other nice-to-know details about such awesome Ukrainian band, and also subscribe to their YouTube channel for more of their eerie and captivating music. And above all that, of course, let’s show our utmost support to those talented metallers by purchasing their fantastic new album from their own BandCamp page or Facebook webstore, as well as from the Metallug Music Facebook webstore soon. In the end, Mental Torment did a beautiful job turning our darkest emotions and feelings such as despair, hopelessness, fear and anger into cohesive and thrilling music, leaving us all eager for more of their music in the coming years and, consequently, keeping the fires of Ukrainian doom burning brighter than ever.

Best moments of the album: Acceptance and Conclusion.