Bang your head nonstop to the straight-to-the-point new EP of pure Heavy Metal by this fantastic Pittsburgh-based band, sprinkling a dust on the poisoned path from which they summit.

The stunning Deborah Levine and her bandmates Andy Ramage and Chris Tritschler on the guitars, Amy Bianco on bass and Adam Ramage on drums, collective known as Pittsburgh, United States-based Heavy Metal outfit Lady Beast, are back in action now in 2021 with a short and sweet EP entitled Omens, the follow-up to their critically acclaimed 2020 album The Vulture’s Amulet, featuring four original tracks plus a very special cover song that transpire pure Heavy Metal throughout the EP’s almost 20 minutes of music. Sprinkling a dust on the poisoned path from which Lady Beast summit, Omens is highly recommended for admirers of the NWOBHM combined with the badass music and rockin’ attitude by Motörhead, Thin Lizzy and Mercyful Fate, among others, providing newcomers to their metallic realm a very good sample of what the band has been delivering to their fans since their inception in 2009, and of what we can expect from such talented crew in their future releases.

The Poisoned Path already brings pure Heavy Metal to our avid ears, with its old school lyrics declaimed by Deborah (“I go out in the dark, / I whisper to the night… / A voice, it soon replies… / Secure a candles flame, / and sharpen up your blade. / Follow me down the poisoned path I’ve made.”) making things even more exciting, while Amy kicks some ass with her low-tuned bass. Then it’s time for more of the band’s melodic sounds in Reaper, with Andy being on fire with his riffs and solos accompanied by his guitar comrade Chris, feeling utterly inspired by the classic music by Iron Maiden and Judas Priest; and they continue to travel through the golden years of rock and metal in Blood For Blood, with Adam smashing his drums in great fashion while Deborah mesmerizes us all once again with her sharp and captivating vocals. After such powerful tune, Lady Beast pay a high-octane tribute to the one and only Rainbow with their electrifying rendition for the undisputed classic Kill the King (you can check the original song HERE), with Deborah and the boys (and girl) being on fire from start to finish, specially Andy and Chris who deliver together sheer awesomeness through their guitars. Last but not least, let’s bang our heads once again to the pounding drums by Adam in the thrilling The Fool’s Journey, showcasing incendiary riffs and solos supported by the rumbling bass by Amy, therefore providing Deborah all she needs to shine on vocals. 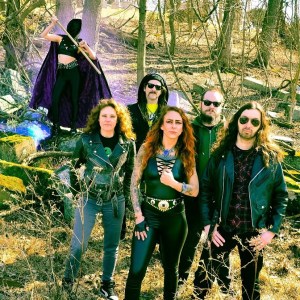 If you want to give Omens a spin, you can find the EP in its entirety on YouTube, but of course in order to show your true support to underground Heavy Metal you should definitely purchase a copy of it from the band’s own BandCamp page, as well as from the Reaper Metal Productions’ webstore in regular CD format or as an ass-kicking 12″ LP on screen printed black/white splatter vinyl that comes with a 11×11 two sided insert with band photo and lyrics (and as side A is the only playable side, on side B is a screen printed image in metallic silver ink). Also, don’t forget to give the band a shout on Facebook and on Instagram, and to subscribe to their YouTube channel for more of their first-class music and stylish videos. I guess I don’t need to explain that the omens found in Lady Beast’s new EP are all beyond good, but just in case you don’t believe me, simply hit play and let this fantastic beast from Pittsburgh show you how heavy music should be played. I bet you’ll instantly fall in love for their music.

Best moments of the album: Kill the King and The Fool’s Journey.