The second half of Hemispheres is finally among us, showcasing a more Post-Rock side of one of the most interesting names of the current British scene. 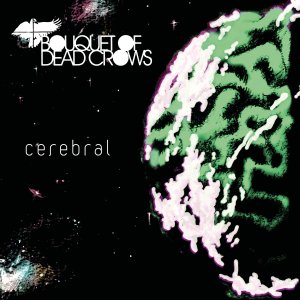 When two become one. That’s the story behind the EP’s Hemispheres Part 1: Celestial, released last year, and Hemispheres Part 2: Cerebral, recently brought into being, which together form a single entity named Hemispheres by Cambridge, UK-based Sci-Fi Alternative Rock and Metal act Bouquet of Dead Crows. Originally written as one album but released in two parts mainly because of the COVID-19 pandemic, Hemispheres combines big riffs with big melodies and shifting time signatures, with Celestial showcasing a more punkish and upbeats vibe, while Cerebral leans towards Post-Rock. Recorded at the Parlour Studios, produced by Neil Haynes and displaying a classy artwork by Stewart Harris from Stewart Harris Designs, just like the 2020 EP, Cerebral continues to showcase all the talent and attention to detail by vocalist Antoinette Cooper, guitarist Neil Bruce, bassist Karen Gadd and drummer Andrew Coxall, putting a dark and very melodic ending to Hemispheres that will please all fans of our good old rock music.

Neil begins extracting serene notes from his guitar accompanied by the steady beats by Andrew in Idle Thoughts before Antoinette delivers her trademark, smooth vocals for our total delight in a great display of Post-Rock with progressive elements; then putting the pedal to the metal the band fires the dancing and heavy tune Standing at the Precipice, bringing forward their Alternative Metal vein with Neil and Karen being on fire with their respective riffs and bass lines, not to mention how visceral the drums by Andrew sound. In One More Sunrise the band gets back to a more gentle and enfolding sonority, presenting a charming atmosphere crafted by all four band members spearheaded by the stunning vocals by Antoinette, followed by The Longest Road, a fantastic ballad where they invest in a more melancholic sound by blending their core Alternative Rock with Post-Rock nuances, and with Neil doing a beautiful job on the guitar as usual. Lastly, get ready for over nine minutes of classy Rock N’ Roll in the form of Somewhere in the Static, where Antoinette sounds majestic supported by the strident guitars by Neil and the rumbling kitchen by Karen and Andrew, flowing smoothly and flawlessly until the very last second.

The second part of Hemispheres can be better appreciated in its entirety on YouTube and on Spotify, and of course if you want to add Cerebral (and Celestial) to your collection of rock albums you can purchase it from their own BandCamp page, from Apple Music or from Amazon, or simply grab the full Hemispheres album by clicking HERE or HERE. In addition, don’t forget to give Antoinette, Neil, Karen and Andrew a shout on Facebook and on Instagram, and to subscribe to their YouTube channel for more of their stylish music. Now that Celestial and Cerebral are finally united and Hemispheres has reached its final shape and form, I’m eager to know what’s next in the career of one of the most interesting names of the current British rock scene, and based on what they have already offered us with their latest releases I’m sure their next endeavor will be just as awesome.

Best moments of the album: Standing at the Precipice and Somewhere in the Static.