Richmond, Virginia’s most insane thrashing squad is back in action with a new album of 14 balls-to-the-wall tracks of ripping Thrash Metal at its finest.

In case you’re not yet acquainted, Richmond, Virginia-based Thrash Metal/Crossover squad Municipal Waste was formed back in 2001 and has been considered by many as the torchbearers for Thrash Metal for the last two decades. Now in 2022 it’s time for Tony Foresta on vocals, Ryan Waste and Nick Poulos on the guitars, Landphil on bass and Dave Witte on drums to kick some ass once again with their newborn opus, entitled Electrified Brain, highly recommended for admirers of the music by Suicidal Tendencies, Nuclear Assault and Toxic Holocaust, among others. Produced by Arthur Rizk and featuring an old school artwork by James Bousema, Electrified Brain will offer your thrashing ears 14 balls-to-the-wall tracks of ripping Thrash Metal at its finest infused with Hardcore and Punk Metal, inviting you to slam into the circle pit like a true metalhead this summer.

Sit down on the electric chair and get ready for the thrashing title-track Electrified Brain, where Tony roars manically supported by the frantic riffs and beats by his bandmates, and Ryan and Nick keep slashing their stringed axes mercilessly in Demoralizer, another classic Thrash Metal tune where Landphil and Dave also make the earth shake with their straightforward kitchen. It’s time to bang your head nonstop to the sound of Last Crawl, a beer drinking, hard hitting Thrash Metal composition where Tony sounds even more demented on vocals, followed by Grave Dive, reminding me of “Toxic Waltz” by Exodus and, therefore, inspiring us to “dance like a money” to the old school riffage by the band’s guitar duo. There’s no time to breathe as the circle pit keeps moving fast in The Bite, spearheaded by Dave’s frantic drumming and with guest vocalist Blaine Cook of The Accüsed adding his touch of insanity to their music, whereas in High Speed Steel the lyrics couldn’t have been more metal (“Born from iron / Strong as steel / Faster than all hell on wheels / Reaching speeds from the unknown / Racing to the terror zone”) while the music is simply awesome and insane. Then more of their incendiary riffs and blast beats are offered to our ears in Thermonuclear Protection, with Tony roaring and barking like there’s no tomorrow.

A jammin’ first half morphs into sheer adrenaline and violence in Blood Vessel / Boat Jail, where their Crossover vein pulses stronger than ever, whereas Crank the Heat is the perfect example of how Thrash Metal should be, which is fast, furious and absolutely fun, with Tony’s raspy screams being flawlessly supported by his bandmates’ backing vocals. Then putting the pedal to the metal it’s time to crush our skulls into the circle pit in Restless and Wicked, showcasing another amazing job done by Ryan and Nick on the guitars, while Ten Cent Beer Night makes me wonder where I could find beer that cheap. Anyway, musically speaking it’s more of their ass-kicking Thrash Metal with all backing vocals adding a Punk Rock-ish vibe to the overall result; and enhancing their animosity and speed the quintet offers us all Barreled Rage, with Landphil’s rumbling bass punching us hard in the head. In Putting on Errors the band needs less than two minutes to demolish everything and everyone that crosses their path, sounding bestial and infernal from start to finish in the name of Thrash Metal, and last but not least, be prepared for one final thrashing attack by Municipal Waste titled Paranormal Janitor, with Ryan and Nick being on fire with their wicked riffs and solos. 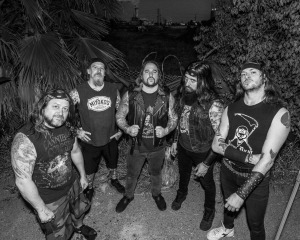 Having said all that, what are you waiting for to join Municipal Waste in their quest for Thrash Metal? You can start following them on Facebook and on Instagram for news, tour dates and other nice-to-know details about the band, subscribe to their YouTube channel for more of their rebellious music, and of course purchase your copy of the excellent Electrified Brain (which is by the way available for a full listen anytime you want on Spotify) by visiting the band’s own webstore or by clicking HERE. Your  metallic brain will certainly melt to the sound of the new album by those American rebels, and I’m saying that in the best way possible because, as you know, we’re all born to thrash until we drop dead, and the music by Municipal Waste is an awesome, more-than recommended soundtrack for that.

Best moments of the album: The Bite, High Speed Steel, Crank the Heat and Restless and Wicked.