Get ready for an explosion of horror and breathtaking savagery made in Taiwan, drenched in the acidic bile of cruelty and drowning in unreasoning hatred.

Lurking in the diseased bowels of humanity since their inception in 2021 in Taiwan, the visceral, unyielding Brutal Death Metal/Deathslam outfit known as Emasculated Vituperation is ready to demolish our senses with their debut opus, entitled Rape Trauma Syndrome, an explosion of horror and breathtaking savagery, one minute dragging you through a charnel pit of rot and decay, the next subjecting you to a frenzied assault of shocking intensity. Drenched in the acidic bile of cruelty and drowning in unreasoning hatred, this is an album for the most desensitized and warped, those fatally addicted to the poisonous adrenaline rush of the brutal outer limits of slamming Death Metal, carefully brought into being by vocalist Larry Wang, guitarist Yuru Wei, bassist Matt Lee and drummer Murray Chen.

Just like the soundtrack to a horrid, gruesome horror movie, the intro Dismembered Flesh Mutilation will send shivers down your spine before Emasculated Vituperation start their inhumane attack with Live Grinding of the Fetus, a massive, truculent Death Metal feast where Larry roars deeply like a creature from the underworld while Murray hammers his drums in great fashion accompanied by the low-tuned, menacing bass by Matt; followed by the title-track Rape Trauma Syndrome, which starts with another movie-inspired intro before the demented guttural by Larry and the incendiary riffage by Yuru pulverize the minds of the lighthearted. There’s no time to breathe as Yuru continues to slash his axe in Forced Swallowing of Vomit, while Murray sounds possessed behind his drum set in a display of Brutal Slamming Death Metal with no shenanigans.

After a quick disturbing excerpt (and it’s even more disturbing if you’re a guy), the quartet will crush your cranial skull mercilessly in Penis Chainsaw Mutilation, where Larry doesn’t sound human at all throughout the entire song, therefore enhancing its violence considerably, whereas Sulfuric Acid Facial Destruction is beyond infernal and demolishing from the very first second. Not only the level of aggression and chaos blasted by the quartet is gargantuan, but guest vocalist Brandon Smith of Agonal Breathing also adds his personal touch of insanity to this Brutal Death Metal onrush for our total delight. Then featuring Xu Zhaiyu and Dongda of The Dark Prison Massacre, Rectal Prolapsing is absolutely disturbing to say the least thanks to the awesome vociferations blasted by all vocalists, while Matt and Murray keep shaking the foundations of earth with their sick kitchen. Finally, their passion for slasher flicks will haunt your damned souls one final time in Unjustified Mistreatment, inspiring us to bang our heads nonstop to the crushing drums by Murray and the always vile riffs by Yuru. 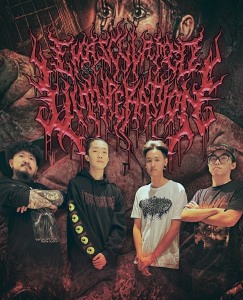 If you think you have the guts to face the pulverizing, perturbing Death Metal crafted by those four sick Taiwanese metallers in Rape Trauma Syndrome, you can stream the album in its entirety on YouTube, but of course if you’re a loyal servant of the most underground form of Death Metal you should definitely purchase the album from the Brutal Mind’s BandCamp page or webstore, as well as from the Fat Tub Of Lard Records’ Big Cartel. In addition, don’t forget to follow the band on Facebook and on Instagram for news, tour dates and other depraved things, keeping the fires of brutal slamming burning and, consequently, inspiring Emasculated Vituperation to continue paving their path of blood, aggressiveness and insanity armed with their wicked and evil music.

Worst moments of the album: Forced Swallowing of Vomit.