Let this vile and demonic breath of Ritualistic and Hypnotic Black and Death Metal from the infernal pits of Chile reach deep inside your damned soul. 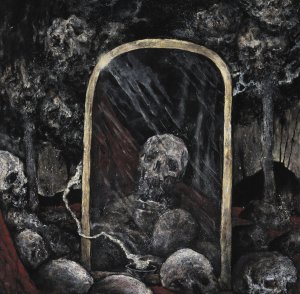 Forged in the fires of Valparaíso, Chile in 2015, Black/Death Metal horde Invocation is unleashing upon humanity a sulfurous and absolutely obscure EP entitled Attunement to Death, the follow up to their highly acclaimed 2016 demo Seance Part. I and their 2018 EP The Mastery of the Unseen, offering fans of extreme music a short but fulminating blast of what the band itself likes to call “Ritualistic and Hypnotic Black and Death Metal” in the form of six original compositions. Comprised of Sense of Premonition on vocals and guitars, Sense of Clairvoyance on bass and Sense of Clairaudience on drums, Invocation reached a hellish harmony with their classic South American diabolism with Attunement to Death, while at the same time imbuing it with a deeper and more unique aspect that bountifully displays their authentic grounding in the occult, setting the tone for a very promising and infernal future for such talented band.

Ominous, cryptic noises permeate the air in the opening track Oppression, a phantasmagorical intro that will drag you to the pits of the underworld before the trio begins blasting their instruments mercilessly in Flying Ointments, exhaling pure evil and heaviness, and with the gruesome vociferations by Sense of Premonition being complemented by his own demonic riffs and Sense of Clairaudience’s intricate and sulfurous beats. After such demented start to the EP, scorching riffs and rumbling, metallic bass lines dictate the rhythm in the also Stygian and infernal Divine Transition, presenting a solid fusion of the darkness of Black Metal with the raw sounds of Death Metal, offering to our avid ears pure devastation in the form of music from start to finish, without of course a single second of peace just the way we like it in extreme music.

A putrid roar by Sense of Premonition kicks off the Death Metal extravaganza entitled The First Mirror, showcasing a great sync between Sense of Clairvoyance and Sense of Clairaudience with their respective bass punches and beats and fills, resulting in a true headbanging tune that lives up to the legacy of the genre. Then get ready for over seven minutes of obscurity and rage in The Officiants, where the classic riffage by Sense of Premonition gets even more impactful accompanied by Sense of Clairaudience’s infernal drums, whereas its vocals couldn’t have sounded more disturbing and visceral. And last but not least, Invocation summon all creatures of the dark in their most detailed and devilish creation, the heavy-as-hell Secret Tongues, uniting elements from Black and Death Metal in the name of evil. In addition, its guitar sounds will certainly darken your mind, while Sense of Clairaudience continues to crush our skulls without a single drop of mercy in this multi-layered aria that sounds absolutely ritualistic.

In a nutshell, while Invocation (hopefully) get ready for their debut full-length opus in a not-so-distant future, there’s a lot to savor in their brand new EP, which as already mentioned might be short in duration but reeks of violence and obscurity. Having said that, simply let the dark and demonic sounds blasted by this awesome Chilean horde penetrate deep inside your soul by following them on Facebook and by purchasing your copy of Attunement to Death from the band’s own BandCamp page, from Record Shop X, or from other locations as soon as the album is officially released in February, celebrating all things evil in the name of our good old Black and Death Metal.

Best moments of the album: Flying Ointments and Secret Tongues.