It’s time to celebrate mankind’s downfall to the sound of the brand new opus by this Israeli thrashing squad, telling stories of technologies rising against us all. 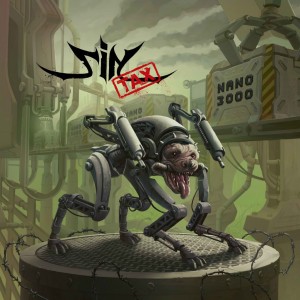 After years of performing all across Israel on their own ticket and alongside international acts, keeping Jerusalem’s metal scene alive and kicking, members of local cult bands the likes of Showrchtsechaye and DeuSphera decided to come together to form a Thrash and Groove Metal beast named Sintax back in 2013, delivering a strong punch of groove and a unique raw energy with each one of their sick compositions. Now in 2021 the band comprised of Yehi Zaken on vocals, Roi Illouz and Yoav Gruper on the guitars, Slava Kishka on bass and Adam Levit on drums have just released their sophomore effort, titled Nano 3000, offering the listener an avalanche of old school metal music combined with a modern production and sound. Mixed and mastered by Mark Mynett at Mynetaur Productions and displaying a futuristic artwork by Nadav Halevi, Nano 3000 tells stories of technologies rising against us and a dystopic prophecy taking in the subjects of anarchy, politics, religion, philosophy, war, sex and more, all embraced by an endless dosage of visceral and acid Thrash Metal.

Like a demented grinding machine, the band begins their Groove Metal attack in Skeleton Scale, with the riffage by Roi and Yoav sounding utterly pulverizing while Yehi vociferates rabidly, therefore resulting in the perfect welcome card by the band in their new album. And more of their fusion of the madness of Pantera with the heaviness of Fear Factory is offered to us all in Reefers Sting And Honey, also presenting hints of the early days of Sepultura, and with the frantic and demonic beats by Adam providing Yehi all he needs to growl like a true beast; whereas in Most Hated Man In The Universe the band gets back to a more traditional Thrash Metal sonority, where the brutal sounds blasted by Roi, Yoav and Slava with their stringed axes will pierce your minds, not to mention the song’s pounding, neck-breaking drums and sick backing vocals. Then we face strident riffs and rumbling bass punches in Sight Got Past, morphing from a more melodic vibe to pure adrenaline and rage with Yehi once again roaring and growling nonstop, accompanied by the visceral beats by Adam.

The title-track Nano 3000 sounds and feels highly inspired by 90’s Groove and Industrial Metal, but without abandoning the band’s thrashing core sound of course, with Adam being infernal as usual on drums while Roi and Yoav extract sheer electricity from their guitars; and the menacing bass by Slava ignites another violent yet very melodic feast of riffs and beats titled Shooting Stars, perfect for jumping up and down with the boys from Sintax and slamming into the pit with your metal buddies. Then after a short and wicked intro we’re treated to the fulminating Death and Thrash Metal hurricane Lethal And Armed, where Yehi continues to lead his horde of thrashing maniacs with his deranged screams while Roi and Yoav slash our minds with their metallic riffage, and a massive wall of sounds will smash your cranial skull in the closing tune Lunchtime Funeral, presenting sick guitar solos and bass punches by the band’s stringed warriors from start to finish. Furthermore, when it’s over, I bet you’ll be begging for more of Sintax’s thrashing music.

After listening to Nano 3000, not only you’ll realize how powerful the music by Sintax can be, but also that the Israeli metal scene seems to be getting stronger and stronger, with bands like Sintax proving once and for all first-class metal music is simply everywhere. Hence, let’s show our support to those talented metallers by purchasing their new album from Dead Pulse, Apple Music or Amazon, by streaming the full album as many times as you want on Spotify, by following them on Facebook and on Instagram for news, tour dates and other shenanigans, and by subscribing to their YouTube channel for more of their demented music and videos. We all know that the future of mankind doesn’t look so good right now, and that the advancements in technology are not exactly bringing tons of benefits for us mere mortals, so why not celebrate the end of our existence to the sound of the top-of-the-line Thrash Metal blasted by Sintax in Nano 3000? At least that way we’ll definitely go out with a bang.

Best moments of the album: Reefers Sting And Honey, Most Hated Man In The Universe and Lethal And Armed.