These promising American death metallers return with an interesting mix of symphony, harmony and darkness. 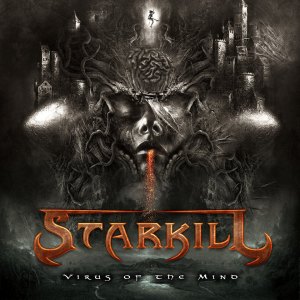 As promised HERE, it’s time to review Virus Of The Mind, the brand new album by one of the most promising Melodic Death Metal groups in the market today (and they’re not from Sweden this time), American band Starkill. Sounding like a hybrid of Behemoth and Arch Enemy, with lots of symphonic elements and the band’s own unique dark touch, this is an excellent choice for fans of a more contemporary Symphonic and Melodic Black/Death Metal, which is at the same time brutal but very harmonious.

Born in 2008 in Bloomington, Indiana under the name of Ballistika and then Massakren, before changing it once and for all to Starkill and moving to Chicago, Illinois, the band was kind of “catapulted” to significant stardom at the end of 2012 when they signed to Century Media Records, releasing their debut album Fires Of Life in 2013. Now with Virus Of The Mind they sound even more prepared for reaching new heights, especially due to their capacity of mixing so many different genres and subgenres of heavy music such as Melodic Death Metal, Power Metal, Thrash Metal and Symphonic Black Metal in the most professional and polished way possible.

And their symphonic vein can be noticed from the very beginning of the opening track, Be Dead or Die, where the awesome keyboard lines blend perfectly with its Power Metal-ish drums at the speed of light by Spencer Weidner, all guided by one of the band’s trademarks, the harsh growls by Parker Jameson. Winter Desolation follows a more Melodic Death Metal line, especially its riffs and solos à la Arch Enemy, and the first “batch” of clean vocals is a welcome addition in order to expand their music range, while Breaking the Madness elevates the adrenaline of the listener, being perfect for live performances. Moreover, despite the vocals being so harsh, it’s easy to understand the dark and interesting lyrics Parker is singing (“Madness permeates / Into my body and my mind, it starts to break / Bit there is fucking nothing left to take / Nothing to feel / Trapped in the labyrinth, losing sight of what is real / So hard to tell which way to go”).

The title-track Virus of the Mind is a very symphonic tune where the smooth keyboard notes make an interesting paradox with the harsh vocals, while the also atmospheric and dark Skyward focus on the synergy between its guitar effects and keyboard notes. Before Hope Fades, one of the singles of the album, is a good reason why they should stick to fast and heavy music: it sounds a lot like the bland material from the last couple of albums by Nightwish (except for the vocals, of course), being so pop and generic it doesn’t represent at all the true heavy music the band is capable of doing. At least they get back on track with some Symphonic Black Metal the likes of Dimmu Borgir in Into Destiny, albeit the clean vocals do not sound as if they belonged to this song.

The last part of Virus Of The Mind has its awesome and pretty bad moments at the same time, starting with the amazing apocalyptic musicality in God of This World, focusing heavily on its keyboards and the more obscure and violent lyrics (“I shall smite the earth with a curse / Enemies to ashes on the soles of my feet / Shedding blood as long as it takes / To cease this engine of grief”), followed by My Catharsis, where all elements of Melodic Death Metal can be found: very technical guitar solos, fast drums, heavy riffs and huge doses of guttural vocals. And finally, Convergence, which was supposed to sound more epic, but in fact it doesn’t live up to the expectations and ends up being just filler and, consequently, the worst song of the whole album by far.

In summary, the second installment by those American death metallers is not only a nice and professional combination of harmony and darkness, but above all it also helps consolidate Starkill in the heavy music scene today as one of the most promising names in Melodic Death Metal. Well, I guess we can already stop calling them “promising”, as they’re indeed a reality, right? And if they keep providing us such enjoyable music, maybe one day they can go even further and reach the status of classic.

Best moments of the album: Be Dead or Die, Breaking the Madness and God of This World.

Worst moments of the album: Before Hope Fades and Convergence.