The shortest and one of the least inspired albums by the greatest Hard Rock band of all time. 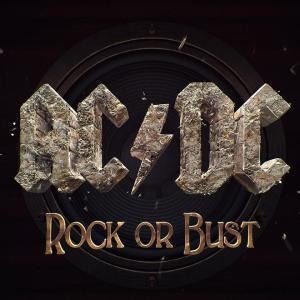 Finally, here we are with the brand new studio album by Australian Hard Rock icons AC/DC, entitled Rock or Bust, the first since the superb Black Ice (2008) and the shortest studio album ever released by the band, even shorter than Flick of the Switch (1983). Not only that, it is their first release without founding member and rhythm guitarist Malcolm Young, who left the band in 2014 for health reasons (he was officially diagnosed with dementia), being replaced by his nephew Stevie Young, and there are also the issues drummer Phil Rudd is still facing with the law accused for procuring the murder of two men and possession of illegal drugs.

However, if there’s a clear surplus of non-music material in Rock or Bust, unfortunately there’s a significant shortfall of Rock N’ Roll itself. I’m not saying Rock or Bust is garbage, but it’s a billion light-years away from what this incredible band is capable of doing. When the other members of AC/DC said all their issues with Malcolm and Phil wouldn’t prevent them from releasing this album and going on a world tour, it makes me wonder if Rock or Bust was just released as an excuse to make tons of money playing their same old classics in sold-out arenas worldwide. I hope not, but that’s the impression I got after listening to this middling album.

When the opening song of the album begins, the title-track Rock or Bust, you need just one note to recognize it’s AC/DC. Moreover, albeit being less inspired than most of their songs from their latest records, its 100% AC/DC chorus (“In rock we trust / It’s rock or bust”) and of course the “magic” crafted by Angus Young help making it an enjoyable track. Pretty much the same can be said about the good Play Ball and its catchy and traditional rhythm, and it would have been so much more fun if AC/DC were selected to play this song during the  halftime show on the next Super Bowl instead of the beautiful but extremely tedious Katy Perry.

Rock the Blues Away is a very generic song, especially its riffs: we’ve listened to the same stuff a billion times before, but at least there was more inspiration and energy in older songs. Anyway, I believe hardcore fans will love it mainly due to its lyrics. Miss Adventure sounds a little different than usual, with its bass lines being a lot more audible (it looks like this is a worldwide trend in music), and despite its lyrics being too repetitive that doesn’t affect the song negatively. In the average Dogs of War, the intro is one of those things fans will truly love to see live, but unfortunately after that the song gets back to the same “I’ve seen it before” level from the previous tracks. 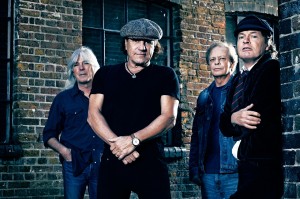 Got Some Rock & Roll Thunder is another very traditional track, but this time a lot more consistent and exciting, and again the riffs and solos by Angus are always so good and soulful it’s impossible not to get thrilled with his performance. On the other hand, I really don’t know what to say about Hard Times except that it is very repetitive and tiring, with even Brian Johnson’s voice sounding totally flavorless. At least the faster and more melodic Baptism by Fire lives up to the band’s tradition in Hard Rock. It’s not a classic, but a lot better than almost all songs in this album, with highlights to its sing-along lyrics and a great performance by the duo Brian/Angus.

The last part of the album is so flat and mediocre you will probably skip all those songs and get back to the start: Rock the House intends to be a Rock N’ Roll pub song, but it’s again too generic and its chorus lacks that amazing punch AC/DC usually provide us, while Sweet Candy (what a boring name for an AC/DC song, by the way) is totally disposable in its 3 minutes of pure repetitiousness. Not even Angus was capable of saving this song from being a total disaster. Lastly, I got really excited with the first five seconds of Emission Control, but then one more time it all went back to boredom with really lazy riffs, drums, vocals and everything else. And when this song is over, you feel there’s something missing in Rock or Bust, and that’s real Rock N’ Roll.

Before you come screaming at me things like “Hey, but that’s AC/DC! They don’t need to change to be awesome!”, let me tell you that I agree 100% with that. More of the same can be amazing, just take a listen at Motörhead’s Aftershock, one of the most badass and incredible albums of 2013, or even to AC/DC’s previous installment, Black Ice, where there isn’t a single song that is not worth listening to so epic that album is. The main issue in Rock or Bust is the total lack of electricity, that special element which makes AC/DC so fuckin’ awesome even playing the exact same type of music for over 40 years. They still rock, especially live, but this album is definitely a “bust”.

Best moments of the album: Play Ball, Got Some Rock & Roll Thunder and Baptism by Fire.

Worst moments of the album: Hard Times, Rock the House and Sweet Candy.