Fans of extreme music, behold the rise of this extremely talented and obscure Black Metal band. 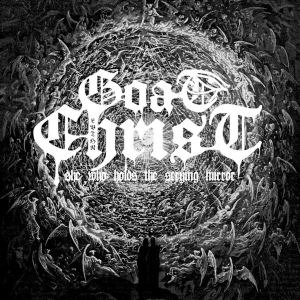 Hailing from Wakefield/Halifax, in the UK, comes Blackened Death Metal band Goatchrist, a group that despite having started as a one man band is now coming together as a full band, re-releasing their debut demo album from earlier 2014, She Who Holds the Scrying Mirror. And I don’t know if this album should be called only a “demo”, so professional and consistent it is compared to many other more experienced Black Metal bands. In other words, why not treating it with a little more respect as a full-length album already?

And it really deserves to be considered as such, especially if you take into account the fact vocalist/guitarist Dominator Xul’Ahabra was just 16 years old and when he was the sole band member. Not only this means it’s an awesome opportunity to enjoy the creations of a musician at the very beginning of his career, but also a chance to acknowledge his amazing talent for crafting extreme music in a way lots of veterans are not capable of even after so many years on the road. But don’t worry, Dominator and his “herd” stay true to the foundations of extreme metal, keeping an enormous distance from any type of commercial or pop stuff.

A smooth piano intro helps set the atmosphere for Through Flames, We Invoke Him (awesome song name, by the way), with its very dark and dense Black/Doom Metal musicality enhanced by the desperate vocals by Dominator, followed by the even rawer Catacombs, with more intense drums by Kaahl and riffs by Dominator and a melancholic break with an interesting duo of guitar and bass lines before an apocalyptic ending. This song can be really disturbing for non-fans of Black Metal, I should say.

And the derangement goes on with The Four Horsemen, another very decent and solid dark tune with harsh vocals again conducting the havoc, with the addition of some keyboard notes to lighten up a little the overall result. Then we have Bloodletting, Part 1, an intro to the title-track focusing on some interesting guitar lines, followed of course by the title-track, She Who Holds the Scrying Mirror, a demonic and atmospheric track where harsh vocals blend really well with traditional Black Metal instrumental, with highlights to bass and drums for being really strong and in total sync.

There’s still a lot more to come, beginning with a 3-minute fuckin’ violent massacre entitled Fatal Equinox (Perpetual Resplendence), a very professional cover version of one of the songs by Brazilian Black/Death Metal band Goatpenis. The next song is another intro, Bloodletting, Part 2, this time more atmospheric due to its organ and keyboard notes, “opening the gates” for the awesome Inferno. How do you think a song called “Inferno” would sound like? It’s truly infernal, with drummer Kaahl violently pounding his drums and Dominator delivering some dark riffs and solos while he screams like hell during the entire song. And for the total delight of fans of extreme metal, this re-issue of She Who Holds the Scrying Mirror also includes a brand new instrumental track, The Triumvirate’s Flight To Nippur, a feast of blast beats and traditional riffs where not even a single second sounds weak or empty.

In order to acquire this sonic storm, simply visit Goatchrist’s BandCamp page, or also visit SixSixSix Music’s official website and Big Cartel page, who by the way does an amazing job with tons of other truly underground metal bands. Fans of Black Metal, behold the rise of Goatchirst, a band that will surely leave their mark in the world of extreme music in the years to come.

Best moments of the album: Catacombs, She Who Holds the Scrying Mirror and Inferno.

Worst moments of the album: The Four Horsemen.