While this distinguished Portuguese Dark Metal band is among us, we can rest assured good and meaningful music is far from being extinct. 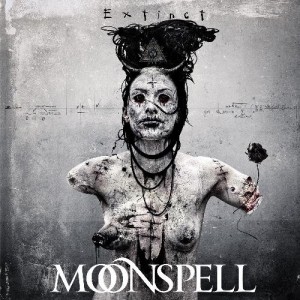 It’s definitely not an overstatement to say Portuguese Dark Metal pioneers Moonspell are the best music group in the history of Portugal, and of course, the best Dark/Gothic Metal band of all times. They’re not just a Heavy Metal band exploring the darkest and deepest emotions with their matchless music, but over the course of their more than 20 years of career they reshaped and redefined Gothic Rock/Metal worldwide, taking it to a whole new level. And even after so many years on the road they still have a lot of creativity and electricity flowing through their veins, culminating in the Goth masterpiece Extinct, their eleventh full-length album and undoubtedly one of their best to date.

With beautifully disturbing cover artworks designed by Greek artist Seth Siro Anton (also known as Spiros Antoniou, leader of Greek Symphonic Death Metal band Septicflesh), a different one per album version by the way, Extinct has an impeccable overall production that only increases its magnitude. Furthermore, the album feels like it’s purposely split in two distinct parts, the first leaning to a more Heavy Metal sounding whilst the second pays homage to pure Gothic Rock. And it doesn’t matter which “part” you prefer, it’s impossible not to enjoy Extinct in its entirety. 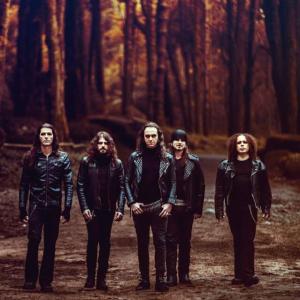 When Breathe (Until We Are No More) starts, you can already feel Extinct is going to be a great album. With the keyboard notes by Pedro Paixão providing that ominous atmosphere we love in Gothic music and its progressive riffs blended with a very ferocious chorus due to the harsh vocals by lead singer Fernando Ribeiro, you’ll feel embraced by the band’s unique musicality for sure. The title-track, Extinct, is a work of art of darkness and passion, offering the listener powerful headbanging riffs, beautiful guitar solos and keyboard passages, an incredible job done by Fernando on vocals, as well as a chorus that is beyond phenomenal  (“Before the lights go out / Before our time is gone / A taste of your lips / Before we go extinct”). In addition, the official video to the song, which you can see below, perfectly depicts its musicality, and if it doesn’t give you a thrill maybe you should go listen to Justin Bieber or One Direction, because you’re not worthy.

Medusalem is not only the fastest and the most metallic of all songs, but the addition of Middle-Eastern elements electrified it even more. I would love to listen to this more-than-perfect epitome of Gothic Metal live, with highlights to Fernando kicking ass on vocals once again. Following that amazing dark attack we have the touching rock/metal ballad Domina, with its thoughtful lyrics enhanced by a mesmerizing atmosphere and more soulful guitar solos, and a brilliant song entitled The Last of Us: with lyrics tailored to drive any girl crazy (“Let me touch you where’s forbidden / And test the limits of your sanctity”), this song kind of kicks of the Gothic Rock extravaganza in the album, focusing on the same musicality that elevated bands like H.I.M. to stardom.

The next track, the beautiful Malignia, is even darker than all previous songs, with its name, keyboards, background effects, the depth of the vocal lines and everything else in this Goth anthem being as somber as possible, while Funeral Bloom is a song that could easily be played on any radio station so catchy it is. Besides, the way drummer Miguel Gaspar, bassist Aires Pereira and keyboardist Pedro Paixão are in sync is remarkable. A Dying Breed is another exciting Gothic Rock song where Fernando varies between his clean vocals and deep growls perfectly, with the rhythm flawlessly following his vocal lines from smoother passages to heavier moments thanks to the excellent job done by Ricardo Amorim and Pedro Paixão on guitars.

There’s so much beauty found in The Future Is Dark it’s hard to explain it in just a few words: it has another very passionate and melancholic chorus that will get stuck in your head for days (“Gotta breathe in, gotta breathe out / Up on your feet, gotta think twice / The future is dark, the future is vile / Without you there’s no tomorrow”), and what can I say about the blackened ambience the band brings forth in this song, mainly due to its guitar lines and solos? That’s simply amazing. And lastly we have the weird French song La Baphomette, which despite not being a disaster it doesn’t keep up with the awesomeness of the rest of the album. It’s important to say the deluxe edition of Extinct also brings four high-quality bonus tracks, and unless you’ve just waken up from a coma you might not have noticed yet they’re alternate versions for four of the songs of the regular album. In my opinion, the best of those tracks is the passionate semi-acoustic Doomina, which is a word play of “Doom” and the original song “Domina”, got it?

To sum up, calling Extinct the best album of 2015 even if we’re still in March, with many months to go until the year is over, is not an overstatement either. An awe-inspiring album like this one truly deserves to be appreciated by all music lovers, it doesn’t matter if you’re a metalhead or not. In other words, go listen to Extinct with the person you love the most, or simply close your eyes and savor it by yourself, resting assured that while Moonspell are among us dark and meaningful music will never be extinct.

Best moments of the album: Extinct, Medusalem, Malignia, The Future Is Dark and the bonus track Doomina.