Live fast, on high, repentless, and always listen to Slayer. 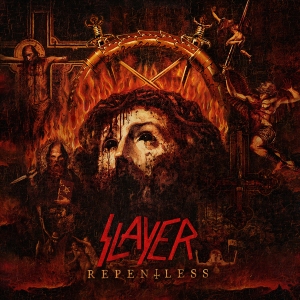 Get the most blasphemous Black Metal band in the world, mix it with the goriest Death Metal act you can think of, and even after that you won’t get close to the wickedness that American Thrash Metal masters Slayer have been providing us all since their inception in 1981. They’re the meanest, the most badass and, above all, the most unrepentant band in the history of mankind. And it’s due to their obstinacy and devotion to their roots that this undisputed band has dauntlessly braved the darkest period of their lives, marked by the terrible loss of the one and only Jeff Hanneman (R.I.P.) in 2013, to finally release the eleventh studio album in their distinct career, the raging Repentless.

However, as the guys from Monty Python would say, “always look on the bright side of life”, which in the case of Slayer translates into Tom Araya and Kerry King recruiting Mr. Gary Holt to the band (the guitar behemoth and mastermind behind another of my favorite bands, American Thrash Metal warriors Exodus), and also the return of the beast Paul Bostaph behind the drums for the first time since their 2001 onslaught God Hates Us All. You can get a good sense of the entire process until Repentless was finalized by watching some amazing videos from their official YouTube channel, including the “enlistment” of Gary and the recording of drums, always noticing how Slayer never lost their core essence amidst such turbulence and grief in their recent past.

Delusions of Saviour, a profane intro the likes of the spine-chilling “Darkness of Christ” (by the way, Repentless has tons of similarities to what Slayer did in God Hates Us All), opens the gates of hell for the piercing riffs by Kerry and Gary in the title-track Repentless, where a deeply infuriated Paul proves why he deserved to be back to the place where he thrived the most in his career. This awesome tune mixes the musicality of their latest albums, with its Hardcore/Punk Rock vibe being perfect for its main objective which, according to the band, is working like a tribute to the deceased Jeff through its simple but effective lyrics (“My songs relive the atrocities of war / Can’t take society any fuckin’ more / Intensity, anarchy, hatred amplified / Playing this shit is all that keeps me alive / I leave it all on the road living on the stage / This is my life where I kill it everyday / So take your shot, bottom’s up, this is no lie / I’ll be beating this guitar ’til the day I die / Live fast, on high / Repentless, let it ride”). And the devastation goes on in Take Control, a high-speed tune where it’s interesting to notice that, although Tom Araya cannot bang his head like before due to his back issues he’s still a devil on vocals, leaving a message to all songsters in the world: no matter how deep your guttural is nor how hard you try, you’ll never reach the incredible level of violence, despair and hatred of Mr. Araya.

Then we have the excellent Vices, which truly sounds like a track from God Hates Us All, and by that I mean it has the same vibe, rhythm, beats, riffs and vocal lines. I love the fact that even when Slayer slow down a little they still sound brutal. In other words, let’s bang our fuckin’ heads and get high with Tom, Kerry & Co. before the next track, Cast the First Stone, offers us such raw and strong beats it feels like Paul wants to intimidate us all, also adding more obscurity to the music and therefore getting closer again to the sounding in God Hates Us All. Besides, I don’t need to say how thrilling the solos by the two demented guitar heroes of Slayer are, right? Anyway, When the Stillness Comes, one of the songs released a while ago in an early version, might push some people to say “this is not Slayer” as it’s not really fast or thrashy, but diehard fans will instantly link it to the sonority found in Divine Intervention, Diabolus In Musica and, again, God Hates Us All. It should sound a lot better when played live (which doesn’t mean it’s a bad studio song), with highlights to the outstanding drumming by Paul, to the desperate vocals and primeval bass lines by Tom, and obviously to its deranged lyrics (“This violence finally sets me free / Brings demons back to torture me / There’s no god pulling at my strings / I’m above all sorrow that fate can bring / Disengaged, I see your face / I turn and rush, I can’t replace”). I just wish the ending could have gone on for a little longer, but it’s still very entertaining the way it is.

Chasing Death is a good example of how the music by Slayer has evolved in the past 20 years, getting modernized but still vicious, with the aggressive vocals by Tom leading this somber tune while the other band members develop a solid ambience in the background; followed by Implode, which sounds a billion times better than the first version released. To be honest, that early version made me really skeptical about how the entire album would sound, but as we’re talking about Slayer, I somehow knew they wouldn’t let their fans down. And Piano Wire, the only song from the album written by Jeff, keeps the level of destruction really high in Repentless, showcasing Tom’s amazing harsh vocal lines blended with many top-notch rhythmic variations.

While listening to Atrocity Vendor, I couldn’t think of anything else but just how amazing the sound of the guitars is, and also that this electric tune has to be part of their live performances for the mosh pits to get seriously physical. Kerry and Gary are like metallic brothers, not to mention that Paul keeps nailing it with his sick beats and fills and that it’s yet another perfect example of how violent lyrics are always supposed to be (“You’re staring at the atrocity vendor / A mother fucking equal opportunity offender / I’ll introduce you to my own morbid charm / And fist fuck you with your own severed arms”). You Against You, another classic Thrash Metal tune where the guitar riffs and solos will please all fans of the genre, could have easily been a song from Christ Illusion or World Painted Blood, sounding as cohesive and precise as almost all Slayer songs, while Pride in Prejudice is not only the most different of all songs but also the worst by far. I’m not sure if the final result was exactly what the band wanted, but it’s in my opinion too slow and not as heavy or dark as it should have been. Of course, if Metallica had a song like this in one of their latest albums that would have been a blessing for their fans, but we know Slayer are capable of creating something infinitely better than that.

I was going to give it “only” a 3.5 after the first listen, but after a few more listens, all the issues faced by the band in the past couple of years (especially the passing of Jeff), the stunning artwork by Brazilian artist Marcelo Vasco (the fuckin’ booklet becomes a fuckin’ inverted cross!), the bonus DVD from the special edition with their killer performance at Wacken Open Air in 2014 and the making of Repentless, and particularly after watching one of the best and most sanguinary videos I’ve seen in my life shot for the title-track (watch it yourself at the end of this review) with some very special guests such as Danny Trejo (aka our beloved anti-hero “Machete”), it deserves a 4.0 or even more than that. In the end, they’re still FUCKIN’ SLAYER no matter what, a band that’s 100% repentless of everything they’ve accomplished through their undisputed career. With that said, always remember to live fast, on high and repentless, listening to Slayer until the inevitable end finally comes.

Worst moments of the album: Pride in Prejudice.