If you love Mr. David Draiman and his crew more than anything in your life, just go for it.

Diehard fans of Alternative Metal can take a rest now and enjoy some peace of heart (or maybe not), as American Heavy Metal icons Disturbed finally released a couple of months ago a brand new album after a long hiatus, entitled Immortalized. And although the sixth studio album in their career (the first since their 2010 release Asylum) might be far from being a masterpiece and won’t change anything in the heavy music scene as we know it, it will surely put you to scream, jump up and down and raise your fists in the air together with Mr. David Draiman and his crew. But that will most probably happen only if you’re addicted to their music, so to speak.

Perhaps the main “issue” with the new album by the band that helped put Chicago, Illinois on the worldwide map of Alternative Metal is not the lack of innovation, but the extreme repetitiousness and hollowness of all lyrics. It’s nothing that ruins the album or makes it unbearable to listen to, but at least for me it feels like many songs are just filler and only their most devoted fans will end up digging them. Anyway, it’s still Disturbed with yet another excellent artwork featuring “The Guy”, designed by Raymond Swanland, and you’ll surely have a good time listening to it at home, work, school or in your car, but other than two or three truly strong songs the rest of the album doesn’t achieve its full potential and will be forgotten pretty soon.

The album begins with The Eye of the Storm, an alternative intro that sets the tone for what’s about to come, the incredible title-track Immortalized, which by the way is the best song of the album by far. You’ll need just a couple of seconds to realize it’s Disturbed at its finest, from its razing riffs to the unique voice by Mr. David Draiman, with its chorus being one of those things you’ll feel honored to raise your fists and sing together with the band (“Oh, in the calm before the storm / Another legend will be born / Another battle will be won / We will rise / Oh, so heed the call of confrontation / Today we feed on domination / Secure a legacy that will never die / Be immortalized”). The Vengeful One is another instant classic where the band offers their fans a unique fighting chant with an imposing rhythm and fierce lyrics, and I bet this song will be a permanent piece of their setlist from now on.

It’s in Open Your Eyes that the aforementioned issues begin: despite being another solid tune where Draiman and guitarist Dan Donegan do a great job together, it’s recommended for longtime fans of the band only as it doesn’t offer anything new, and besides, the chorus ends up getting way too repetitive after a while. And if they wanted to send an inspiring message through the song The Light, I’m sad to say they failed miserably, not only because its instrumental parts are significantly bland but also because its lyrics couldn’t sound more generic. It might be enjoyable for fans who love anything that comes from the band, but for fans of a wider range of heavy music it’s a real bummer. Then we have the interesting What Are You Waiting For, which reminds me of some of their songs from their 2000 classic The Sickness mixed with their 2005 release Ten Thousand Fists. In spite of the repetitiveness of the lyrics and chorus it’s indeed a very pleasant tune, with highlights to the excellent job done by drummer Mike Wengren.

You’re Mine starts in a “scary” Pop/Dance way, fortunately evolving to a much bolder and heavier sonority and therefore without doing any harm to the album; followed by Who, and let me tell you that if you’re not a fan of the band you won’t even notice the transition from the previous song to this one. However, this one is a lot more elaborate and deserves a better listen, with its solid riffs and beats providing Draiman all he needs to deliver his classic vocal lines. Once again lyrics get too repetitive in Save Our Last Goodbye, with its heavy riffs being what really stand out and give the song some significant energy. It should work a lot better if played live, though. 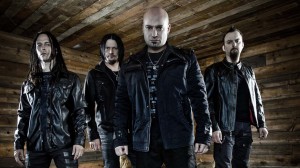 I’ll never ever understand the reason for a band like Disturbed to record the hideous Fire It Up. I’m not pro or against it, I just think this is not Disturbed, where its weak instrumental  and even weaker lyrics feel like Draiman had the terrible idea to partner with Snoop Dogg so infantile they are (“Fire it up, I like to fire it up / and it feels so right / Fire it up, ’cause when I fire it up / I feel like serenity / I feel like serenity… is mine”). Disturbed should sing about fighting, about the human psyche, hatred and pain, and leave the superficial stuff to R&B and other crap. At least The Sound of Silence keeps up with the band’s tradition of unusual cover songs, this time paying a tribute to Simon & Garfunkel. It’s interesting how Draiman changed his voice for this song, and albeit it’s nothing outstanding and not even close to their awesome version for “Land of Confusion”, it’s still a nice variation to the band’s sounding.

Never Wrong sounds like the early days of Disturbed with its pure Alternative Metal vibe and Draiman showcasing his powerful vocals in a thrilling way. In addition, the entire band is on fire, elevating the song’s electricity and making it a perfect choice for some action inside the pit during their live performances. And lastly, the album ends with yet another decent but not outstanding song named Who Taught You How to Hate, also tailored for old fans of the band, with its repetitive but good-to-sing-along lyrics. And if you get any of the special editions of the album, I personally consider Legion of Monsters the most exciting bonus track of all.

To sum up, Distrubed are offering a decent Disturbed album for Disturbed fans, and that’s it. Nothing truly new, no breakthroughs or any type of new concepts added to it. Draiman knows what he’s doing and what his fans want, and that’s exactly what he did in Immortalized. If you love the music by Disturbed more than anything in your life, just go for it and you won’t feel disappointed at all. If Disturbed are simply another band in your playlist, take a shot at Immortalized and you’ll find some pretty good moments in it, but don’t expect it to have a relevant impact on the way you see music today. As long as you have fun listening to it, it’s mission accomplished for Draiman and his bandmates.

Best moments of the album: Immortalized, The Vengeful One and Never Wrong.

Worst moments of the album: The Light and Fire It Up.