Two high-skilled Spanish brothers and their loyal Slovenian sledgehammer deliver a lesson in Blackened Death Metal, spreading darkness and destruction all over the world through their purely demonic and extremely refined technique.

Conceived in the minds of Spanish blood brothers R.M. (vocals) and J.M. (guitars) before founding Black/Death Metal band Between the Frost in 1993, and reignited in 2010 with the help of the impressive Slovenian drummer Robert Kovačič (Belphegor, Obduktion, Nothnegal), Blackened Death Metal act EvnaR is releasing their debut full-length opus, curiously entitled E.V.N.A.R., with the main objective of spreading darkness and destruction all over the world through their purely demonic and extremely refined technique, which will certainly please all fans of Behemoth, Belphegor and God Dethroned, among others.

The pitch-black artwork by Spanish artist César Valladares, whose pencils are also seen in the artworks for bands like Asphyx, Balmog and Graveyard, with the Reaper sitting on his throne waiting for the doomed to take unholy communion with him, not only represents the desire of the brothers to have a more primitive cover art based in the classic concept of the Grim Reaper, but it’s also a precise depiction of the unrelenting Blackened Death Metal discharged by this exciting band from Tarragona, Catalonia. As one final (but important) detail before all hell breaks loose, E.V.N.A.R. was recorded with a lot of patience and dedication for one year in different studios in Spain and Slovenia, being finally mastered by multi-instrumentalist and producer Tore Stjerna at Necromorbus Studio in Sweden, just to give you an idea of how crisp and ear-splitting the compositions by EvnaR sound.

The sharp and fast riffs by J.M. ignite the Blackened Death Metal extravaganza named Blasphemia Manifesta, a feast of extreme music from the netherworld where R.M. personifies the song’s demonic lyrics through his gruesome growling (“Darkness unites us beyond / All human will / We should be strong as the evil in whom believe / Denial praises / Utter darkness / This is our grim black cult, grim black cult of death”), while in Contemptus Vitæ we are able to witness why Robert was the perfect fit for the band, delivering complex and vicious beats and fills. Furthermore, the whole song leans towards pure Black Metal due to its frantic speed and to the hellish sound of the guitar by J.M., an extra hint of devastation to an already solid composition.

Then we have a fantastic composition from hell entitled Infinite Dark Hatred, which name epitomizes its sounding. There’s a gargantuan amount of hate and despair in R.M.’s vocals, barking like a rabid demon most of the time, whereas the intricacy found in the drumming by Robert gets closer to what we can normally find in more progressive heavy music. In Death In The Air (Stench Of The Slain), rumbling bass lines are quickly followed by more satanic riffs and bestial beats, getting even more blackened than the previous tracks and, consequently, resulting in a nonstop havoc highly recommended for fans of old school Black Metal with a more melodic approach. If you’re a true fan of guttural vocals, I bet you’ll be screaming the chorus together with R.M. every single time you listen to this amusing chant. 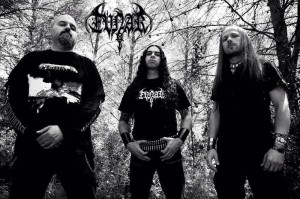 King Of The Grand Uruk has as its main ingredient its epic lyrics about a powerful entity of darkness (“Two parts god, one part man / King of the Grand Uruk / The envy of the gods / Carved his story in stone / Dreams and visions fighting both / Against demons and men”), which will surely grab the attention of any listener avid for a good storyline behind a sonic chaos. Musically speaking, it’s another potent blast of extreme music, where not a single space is left empty, and if you know Robert from his previous bands you can imagine how astonishing his drumming sounds in this savage composition. And embracing total fuckin’ darkness, the Spanish brothers and their loyal Slovenian sledgehammer deliver traditional Black Metal with the most poisonous elements from Death Metal in Torment of the Damned, showcasing an amazing combination of metallic riffs and rhythmic beats.

Conceived In Fire provides a quick break for us to recover our energies in the form of acoustic guitars and less devastating riffs, but that’s obviously for a very short while as their menacing sounding returns to torment our souls ruthlessly. Furthermore, the complexity displayed through the guitar lines by J.M. will put a smile in the face of any guitarist who loves extreme music or even the ones who have never had any contact with the furious uproar of Blackened Death Metal. And last but not least, it looks like EvnaR have absolutely no mercy on our souls based on the demented tune that closes the album, named My Cremation, where the unstoppable beats blasted by Robert complement the hurricane of darkness led by J.M., while R.M. keeps vociferating his putrid words vigorously.

Although it might have taken a considerable amount of time for EvnaR to become a reality in the world of extreme music, every second was worth the wait thanks to the brilliant job done by this power trio when recording E.V.N.A.R., and in order to know more about their blasphemous and cataclysmic music, go check their Facebook page and get your copy of E.V.N.A.R. at their BandCamp page, at The Vinyl Division’s BandCamp page, or at Discogs. I won’t be surprised if I see this album among several rankings listing the top releases of 2016, it doesn’t matter if it will be on a list built by an entity specialized in extreme music or not, so compelling the content of the entire album is.

Best moments of the album: Blasphemia Manifesta, Death In The Air (Stench Of The Slain) and My Cremation.