Brave the psychedelic sludge waters of Doom and Drone Metal brought forth by this inventive one-man band from Canada, and have your musical boundaries pushed further in a unique way. 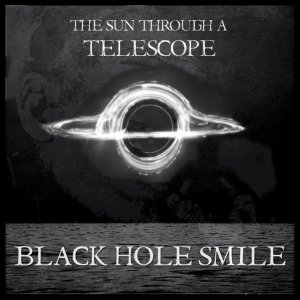 I love when a band challenges our senses and pushes our musical boundaries further and further, which is exactly what you’ll face in Black Hole Smile, the brand new album by Canadian Drone/Doom Metal one-man project The Sun Through a Telescope, led by Ottawa-based multi-instrumentalist Leigh Newton (also known as Lee Neutron). In nothing less than 17 (yes, seventeen!) distinct tracks, Lee offers the listener an unconventional fusion of several styles and genres that will blow your mind, or as he likes to say, his music is where “Blackened Doom meets Ambient Drone, soaked in psychedelic sludge water.”

Lee has been very active with his The Sun Through a Telescope since 2011, having released a few EP’s that year before his first full-length album, titled I Die Smiling, came to light in 2013. The following year saw the birth of a new EP named Unnatural Cruciform on a Moss Covered Rock, paving the path for Lee to go even further with his creativity and bring forth Black Hole Smile. Each song will sound different than the others, each one being a distinct experiment by Lee, creating a parallel universe of music that might not make a lot of sense at first, but that will certainly get you entranced from start to finish.

In the very atmospheric, psychedelic and experimental Never Pray, Lee’s clean vocals sound as if he was in a different dimension, with the song’s background being only a distant, smooth noise, becoming an interesting warm-up for Living Every Single Hell, where alternative and distorted guitars are complemented by slow, sharp beats before an explosion of rage and anger with elements of Black and Death Metal invades our ears. Furthermore, Lee goes from maniac growls to desolated clean vocals and back to his demented mode à la Mike Patton, guiding us in a 10-minute voyage through the world of The Sun Through a Telescope. With such an impactful name, I couldn’t expect anything less visceral and experimental than Worm(hole)s, where Lee offers more of his hypnotic guitars and doomed beats, as well as his sick gnarls blending Drone and Doom Metal in a very gripping manner; followed by The Inverted Cross Of A Sunday Funday, a fun and solid instrumental piece by this one-man army displaying less than two minutes of demonic sounds inspired by the meanest forms of Industrial and Drone Metal.

“More Light” continues with Lee’s movie score-inspired extravaganza, being somehow epic and building an instant connection to Every Single Living Hell (note the word play with the second track of the album), with the crow in the background giving it a funereal vibe before becoming a hellish hybrid of Blackened Doom and Drone Metal, also presenting wicked sounds usually found in Alternative and Groove Metal. Focusing on its choir-like vocals and gentle guitar lines, the purely atmospheric composition Dead Dies, New Born gets to a more Alternative Rock and Metal sonority halfway through it, giving even a sense of hope to the whole song, whereas Something Witchy offers 40 seconds of a demented devastation full of distortions and wicked growls before peace returns in No Way Home. However, that peaceful ambience lasts only until half of the song, when Lee beings firing his blast beats and atmospheric vocals again.

Black Hole Bile and “Oh No, This Is Mine” are two similar but somehow unique one-minute deranged instrumental tunes, while A Prolonged Vegetative State presents a more violent side of The Sun Through a Telescope, showcasing deeper guttural and heavier sounds as if Faith No More was “poisoned” with the darkness of Drone and Doom Metal. And never tired of experimenting with different sounds, Lee delivers the Ambient Black Metal tunes Burn Everything and No More Light, with things only getting weirder and more experimental as the album progresses, so alternative it’s impossible to label what’s happening. If I try to explain the music in Caught, Drugged, Trial, Exile, one more atmospheric creation spawned by Lee, I would say there’s an inner fury in this song that never fully comes out, increasing its anxiousness and despair, while the melancholy and the sounds of birds in the background in Dead Tomorrow flow into the pleasant sonority with smooth vocals and the delicate instrumental from Whitehole / Brighthell, with moments of anger meticulously inserted at specific parts of the song, building a suffocating and climatic conclusion to this extravagant album.

If you want to know more about Lee and his The Sun Through a Telescope, simply visit his Facebook page for the most up-to-date news, with Black Hole Smile (which can be streamed in its entirety HERE) being available for purchase on BandCamp, CD Baby, iTunes and on Amazon. After swimming in the psychedelic sludge waters of Doom and Drone Metal proposed by The Sun Through a Telescope, I’m sure your view of the current state of heavy music will change considerably, proving how important independent artists like Lee are for music and arts in general.

Best moments of the album: Living Every Single Hell, Every Single Living Hell, A Prolonged Vegetative State and Whitehole / Brighthell.

Worst moments of the album: “Oh No, This Is Mine” and No More Light.