Rock N’ Roll is far from being dead, and this obstinate German rocker will prove you that through the electrifying music flowing from his brand new solo album. 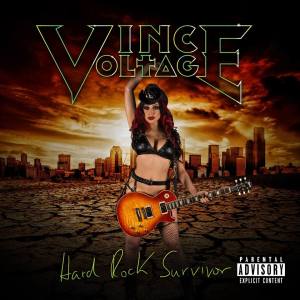 Everywhere you go you’ll hear people saying Rock N’ Roll is dead, and there’s nothing we can do to save it. For instance, even renowned rock stars like Gene Simmons and Billy Corgan support that theory. As a diehard lover of the genre I personally couldn’t agree less with that statement, and after listening to the high-voltage Hard Rock Survivor, the brand new album by German Rock N’ Roll warrior Vince Voltage, you’ll also realize the blazing sound of electric guitars, high-pitched vocals and fast-paced beats piercing through our ears is far from being extinct. After playing several concerts around Europe, sharing the stage with bands like Helloween, Doro and Bonfire, and after releasing the albums Burned Beyond Recognition (2002) with the band Apathy; Ultimate Frightmare (2013) with the band Ex Wife’s Skull; and more recently Arrogance (2015) with his most famous act Pussy Sisster, it’s time for Vince to fight boredom and keep the flame of rock music alive with his action-packed solo project, and I’m sure you’ll have a lot of fun by joining him in this rockin’ quest.

Hailing from the city of Stuttgart, Germany, Vince has been building a solid career not only in music, but also in photography, a passion discovered while touring Europe with Pussy Sisster, becoming a well-known Photoshop artist as you can see in his Facebook page The Art of Vince Voltage. Furthermore, the cover model for Hard Rock Survivor is Dani Divine, a famous alternative model with more than 2.5 million Facebook likes, with the photo session and all other details being done by Vince himself (you can see a short clip of how that happened HERE). Featuring a respectable team of guest musicians such as Marcus Jürgens (Brainstorm) and Ralf Stoney (Stormwitch), Hard Rock Survivor will definitely kick your ass, alluring you to surrender to the undisputed and unparalleled power of our good old never-dying Rock N’ Roll.

Vince and his guitar will take you on a frantic ride in the title-track Hard Rock Survivor, where he hits us in the face with his old school metallic riffs and solos while his supporting band has an amazing performance as well, also delivering words with a pure Rock N’ Roll taste (“Your mama tried to stop the sound when you were younger / She never ever understood / No doc or daddy all around to feed your hunger / Didn’t understand / Your Rock’n’Roll romance is goin’ on”). Something To Believe In, a harmonious ballad showcasing semi-acoustic guitars and an old western vibe, sounds like a hybrid of Bon Jovi and Journey recorded in the 80’s, with a kick-ass solo by Vince as the icing on the cake; whereas Billy The Kid, another dancing tune by Vince and his crew, works as a tribute to the most famous (and amusing) outlaw in history, with the accelerated, rhythmic drums by Torsten Sauerbrey enhancing its overall electricity in a fantastic way. 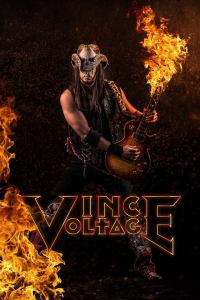 Born to be a rock n’ roll radio hit, Some Like It Ugly offers classic high-pitched demented vocals, Van Halen-inspired riffs (more specifically their all-time classic “Ain’t Talkin’ ‘Bout Love”, and I see it as a humble tribute to this iconic band, of course), and weird but effective lyrics (“Didn’t roll the dice for the money / Just laid down my pain / Was usin’ both of my nares in despair / To go for cocaine / Didn’t want to dance to the rhythm / Just wanted to feel the beat / Cause trouble needed to go round and round / To make me leave my seat”), being one of my favorite songs of the album. The Ballad Of Ricky Razor is another power ballad by our obstinate rocker, sounding a lot more introspective and melancholic than “Something To Believe In” and displaying a nice, sorrowful harmony and dark keyboards in the background, followed by Busty Sandy, showcasing classic Hard Rock guitar lines and a great sync between vocals and beats. Needless to say, as it’s a song about a lustful woman, it can definitely be used for a strip-tease due to its sexy rhythm. And Cry Out Till Midnight, albeit also presenting the old school sounding of its predecessor, feels a bit uninspired and without the necessary punch, despite the good job done on vocals and the slight amount of progressiveness added to the instrumental pieces.

Featuring additional guitars by Sebastian Dracu, Lick It If You Like It brings forward lyrics that are a blend of KISS and Steel Panther, while its instrumental is direct, heavy and fiery à la Motley Crüe and Poison, resulting in a more-than-entertaining tune that will go really well with a cold beer. In Borderline, one more song about enjoying your life, it’s time for Ralf Stoney to make the guitar duo with Vince, firing a solid mix of Rock N’ Roll and Hard Rock inspired by the sound from the 80’s with a modern twist. And how about one more touching ballad before the album is over? That’s what you’ll get in the gentle but heavy Killing Times, with the piano notes bringing light to the sadness flowing from the guitars, not to mention the amazing solo by Vince; with the modernized Hard Rock chant Broken closing the album in an dynamic and groovy way. The keyboards by Sven Gallinsky give it a The Doors-ish touch, while the drumming by Torsten Sauerbrey generates the perfect ambience for the riffs and solos by Vince and guest guitarist Lick Fury.

You can get more details on the music and art by this German hard rocker at his official Facebook page and YouTube channel, and purchase your copy of Hard Rock Survivor on iTunes, Amazon and Spotify. While there are talented and passionate rockers like Vince Voltage spreading their high-end rock music to the masses just as what he offers us in Hard Rock Survivor, I guess we don’t need to panic at all about the fear we all have of our beloved Rock N’ Roll eventually dying one day.

Best moments of the album: Hard Rock Survivor, Some Like It Ugly and Lick It If You Like It.

Worst moments of the album: Cry Out Till Midnight.