A powerful album of Canadian Thrash and Death Metal that confirms there’s no god in our decaying world, but only an infernal majesty of extreme music reigning supreme among us. 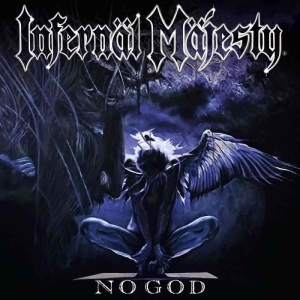 Formed in the distant year of 1986 in the city of Toronto, Canada, but currently located on the opposite side of the country, in the beautiful city of Vancouver, Thrash/Death Metal squad Infernäl Mäjesty has been unleashing complex and exciting metal tunes upon humanity since their inception, starting with their 24-track demo recorded at the renowned Metalworks Studios in Toronto (owned by members of Canadian Hard Rock band Triumph) and their 1987 debut album None Shall Defy, and culminating with the release of their brand new opus now in 2017 titled No God.

Featuring an elegant cover art by Safir & Rifas (based on their 2014 oil on canvas art named “Death Angel”), No God offers the listener 11 imposing thrash tunes for the delight of fans of the heaviness and aggressiveness of giants such as Slayer, Behemoth and Testament, masterfully played by founding members Chris Bailey (vocals), Steve Terror (guitar) and Kenny Hallman (guitar), together with newcomers Daniel Nargang on bass and Kiel T. Wilson on drums. “We put a lot into it physically and mentally and feel it has a classic Infernäl Mäjesty undertone while artfully expanding into episodes of melodic cacophony. Recorded at our studio in Vancouver, Canada and produced by Steve Terror, Chris Bailey and Ken Hallman, we enrolled the masterful mixing skills of Chris ”Hollywood” Holmes and believe this to be our best works since None Shall Defy”, says the band about their brand new spawn.

Chris and his horde begin their ominous attack from the very first second of the belligerent tune Enter The World Of The Undead, where we’re furiously invited to enter their world of Thrash and Death Metal to the sound of the cutting riffs by Steve and Kenny, while Kiel keeps up with the legacy of iconic drummers such as Dave Lombardo, Gene Hoglan and Tom Hunting. Dark and acrid words flow from Chris’ visceral growls in the rhythmic onslaught of extreme music called In God You Trust, also presenting a hellish aura in the background which ends up enhancing the song’s obscurity; followed by a very aggressive and infernal composition named Signs Of Evil, displaying a similar pattern than both previous songs, with highlights to the unstoppable Kiel behind his drums and to the once again sharp guitar riffs and solos by Steve and Kenny. And in Another Day in Hell the music feels like it’s rising from the pits of the underworld, with the initial roar by Chris being a sign of how heavy this tune will be. Not only it brings an old school sonority the likes of Unleashed, but its calmer but blackened breaks make the whole composition even more menacing.

Kingdom Of Heaven, a mid-tempo straightforward Death Metal chant with thrashing elements added to it, presents a neck-breaking start with lots of groove emanating from Kiel’s drumming, while Steve, Kenny and Daniel slash our skin with their razor-edged strings, whereas the title-track No God is a blasphemous feast of Death and Thrash Metal perfect for their live performances, with Chris vociferating the song’s wicked lyrics manically (“Born of ﬁre from the starless depths of hell / The red cross turns black so many dead sent up the stacks / Spill the blood of virtue for the empire of gold / Satan laughing defecating into open mouths below”), therefore being one of the strongest compositions of the whole album. Then we have an eerie instrumental track about the 9/11 attacks titled False Flag for Europe, paving the path for the rhythmic Nation of Assassins, starting in a darker and heavier pace before exploding into a thrilling hurricane of metal, with Chris darkly screaming the song’s name while the rest of the band blasts a very cohesive fusion of Thrash and Death Metal.

The killer drumming by Kiel and the straightforward guitars by both Steve and Kenny are all Chris needs to fire his infuriated growls in the fantastic House Of War, with the aggressiveness of the entire song being way above average. All band members are absolutely on fire, delivering an intricate but always crude and primeval hymn for admirers of traditional Death Metal that has all it takes to become an underground classic. Systematical Extermination keeps the quality of the album at a very good level, albeit being less creative than the others (it might have been more effective if it was a little shorter, though), while in Extinction Level Event a truly macabre intro morphs into a pounding sonic devastation. Steve and Kenny continue with their merciless slashing, also blasting melodious lines to give more balance to all the havoc going on, with Kiel helping Chris to poetically scream about the end of mankind until the song’s somber ending.

Infernäl Mäjesty is another one of those amazing bands that makes us proud of being Canadian, and if I were you I would certainly like their Facebook page, listen to more of their demonic Thrash Metal at their YouTube channel and at their BandCamp page (where No God will be available soon), and grab your copy of No God at the High Roller Records’ webstore in different formats (CD digipak, LP black, LP splatter and LP royal blue), at the Napalm Records’ webstore, at the Season of Mist’s webstore, at Target, at Record Shop X, on Amazon and several other locations (please note that “False Flag for Europe” and “House Of War” are on the CD and digital download, but not on the vinyl edition because they are already on a custom House Of War 7”). After listening to this raging lecture of Extreme Metal, I’m more than inclined to believe there’s no god, but only an infernal majesty of metal music reigning supreme among us.

Best moments of the album: Enter The World Of The Undead, No God and House Of War.