Behold the epitome of Blackened Hardcore offered by a distinct Danish act, channeling pure darkness throughout 40 minutes of doomed sounds and noises split in 11 obscure compositions.

Hexis (ἕξις), a Greek word important in the philosophy of Aristotle (and because of this a traditional word of philosophy), is a relatively stable arrangement or disposition, for example a person’s health or knowledge or character. However, since 2010 the word has also been used to describe a distinct band from the city of Copenhagen, in Denmark, playing a mix of Hardcore and doomy Black Metal and singing about topics such as nihilism, anti-Christianity and abstract thought. Across their history, the band has played over 300 shows in the United States, Canada, Japan, Cuba, Russia, the UK and all over Europe, showing how appreciated their unique and obscure music is worldwide.

Following the success of their first full-length album Abalam, from 2014, as well as many other EP’s, demos and split albums released through the years, Hexis return with their second full-length installment, titled Tando Ashanti, the epitome of Blackened Hardcore channeling pure darkness in the vein of Celeste and Oathbreaker and the start of an almost year-long worldwide tour for 2017, released through Halo of Flies in North America and Alerta Antifascista Records in Europe. Furthermore, Hexis are one of those bands where informing their lineup is definitely an item of very low importance to them, which means the names featured on this review might not be accurate. What seems to be their current lineup is Filip on vocals, Victor Kaas on guitars, Luca Mele on bass and Tommaso Rey on drums, but if these names are somehow incorrect I apologize for that. Anyway, it’s the music that really matters, don’t you agree?

Distorted sounds and an apparent lack of hope permeate the air in the intro Tando, when we’re suddenly attacked by Hexis in Ashanti, with the lancinating riffs by Victor together with the demented beats by Tommaso creating a beyond belligerent atmosphere perfect for the irreligious lyrics growled by Filip (“Faithless. But yet you pray in hope that your nightmares will disappear, that these images will leave your head, leave your mind. Tied into anxiety, tied into hopelessness. Surrounded by flies, surrounded by thousands of eyes. Faithless. God is not here today.”). Molestus also begins in full force, a visceral amalgamation of heavy sounds and piercing noises by Filip and his crew, with highlights to the crude riffs by Victor and the rhythmic drumming by Tommaso; whereas Ritualis, albeit following a similar pattern, sounds sharper and more aggressive, which in the end boosts its impact on the listener, not to mention its old school Black Metal riffage and endless obscurity as its main ingredients. 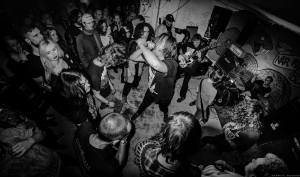 Calamitas represents brutal devastation in the form of music, blending the most violent elements from Black Metal, Hardcore and Neocrust in a fantastic spawn of extreme music by Hexis, with the vocals by Filip sounding extremely demented; followed by Nocturnus, where heavier-than-hell riffs are quickly joined by frantic drums in another brutal creation. Moreover, their sonic havoc suddenly gives place to a slow-paced Doom Metal-ish musicality led by the low-tuned bass by Luca Melo, but all hell breaks loose again for our total delight. And it looks like Hexis mastered the art of crafting bold and devilish songs with less than three minutes like what we face in Opacus, presenting more of the band’s austere lyrics (“As shadows it passes by, creating what is his, taking what was yours. Purging the body, the body of the heartless. Immerse them, immerse the victims, immerse all life, the fragile souls. The shadows they pass, purging the souls.”). Can you imagine this song with a dark orchestra in the background? I can, and just the idea is already beyond awesome.

Cordolium, the longest of all tracks, comes crushing with a hurricane of distorted guitar sounds, slow and menacing beats, and the vociferations of Filip, and that negativity and despair goes on for the song’s six obscure minutes, growing in hostility until its resonant ending, which builds an instant connection with the demonic Resurrectio, with Filip being accompanied by only an eerie background noise and a few isolated beats. In the end, it’s just noise and feels a bit like filler, albeit it makes some kind of sense when put together with all other songs from the album. Luckily, in the belligerent Septem the band gets back to a more Hardcore sonority, delivering modern Black Metal riffs with progressive drumming and hellish gnarls, not to mention the guitars by Victor which are a demonic work-of-art. And ending this eccentric spawn of blackened sounds we have another intense creation named Praesagium, showcasing an amazing job done by Tommaso with his intricate beats, all the malignancy flowing from Filip’s grasps, and a truly Stygian ending in one of the most complete and visceral of all songs.

There are so many places where you can buy your copy of Tando Ashanti in different formats I might have forgotten a few of them on my list, but here we go anyway. You can get the album at Hexis’ BandCamp, at the Alerta Antifascista Records’ BandCamp, at the Init Records’ BandCamp or webshop, at the Halo of Flies’ BandCamp or webshop, at the Bloated Veins’ Big Cartel, on Amazon or at Discogs. Tando Ashanti might be considered by many the most complete, detailed and obscure work by Hexis to date, which is something I have to agree with. I don’t recall listening to such piercing and multi-layered Blackened Hardcore before, and let’s hope Hexis keep taking their aggressiveness and creativity to new heights for many years still to come.

Worst moments of the album: Resurrectio.