A precious gem of Progressive Thrash and Death Metal made in Denmark, courtesy of an up-and-coming horde that’s more than ready to take the entire world of heavy music by storm. 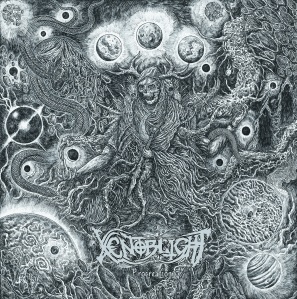 Hailing from Silkeborg, a small city located in the middle of the Jutlandic peninsula in Denmark, here comes a new Extreme Metal horde that goes by the powerful name of Xenoblight, playing a multi-layered fusion of Progressive Thrash and Death Metal characterized by an intense and blistering atmosphere, while at the same time maintaining an apathetic and melancholic lyrical universe. Although the band is relatively new to the scene, being founded in the beginning of 2017, Xenoblight spent the following year carefully crafting their first record while playing only a limited number of shows before entering the studio, unleashing now in 2018 their debut opus Procreation.

Featuring an obscure and stylish artwork by Fendie Art, Procreation not only brings forward in its ten unrelenting and totally demolishing tracks what the band comprised of the she-demon Marika Hyldmar on vocals, Rasmus Tobias Clemmensen and Mikkel Jepsen on the guitars, Steffen Hagelskjær on bass and Thomas Halborg Madsen on drums is capable of, but it’s also a lesson in how to blend the best elements from old school and modern extreme music with tons of progressiveness and feeling, turning it into a must-have for any diehard fan of the music by renowned bands such as Behemoth, Cattle Decapitation, Gojira, Kreator, Skeletonwitch and Fleshgod Apocalypse, among several others.

In the intro Procreation the band offers the usual “calm before the storm” until they come crushing like a bulldozer in Descension, a crisp and modern display of Progressive Death Metal with a lot of punch where Marika begins gnarling the song’s lyrics in a beyond devilish way (“Behold our entitled savior / Spreading knowledgeable fumes / Binding hands with a single glance / Beredied for a stance… / …Entering the mortal realm / With stricts holds of selfproclaimed victories free from shame”), also showcasing a fantastic job done by Thomas with his piercing beats and fills. And Steffen Hagelskjær kicks off the dark tune Shapeshifter with his menacing bass, with the music morphing into a flammable hybrid of Thrash and Death Metal where Rasmus and Mikkel slash our ears with their heavy and metallic riffs. 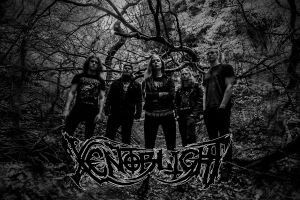 Obsidian Chromatism is a traditional Progressive Death Metal creation where the entire band fires sheer aggressiveness, building the perfect stage for Marika and her demonic growls; whereas in the song that carries the band’s name, Xenoblight, we’re treated to three minutes of piercing sounds and nonstop beats and fills in a demolishing instrumental voyage, with highlights to the scorching guitar riffs by Rasmus and Mikkel. Then without giving us a single second to breathe Xenoblight keep blasting pure evil through their instruments in Nocturnal Manifestations, a frantic, furious and superb display of modern-day Thrash and Death Metal led by the enraged screams by Marika, with Thomas once again sounding brutally amazing on drums while Rasmus and Mikkel are bestial with their solos, followed by Transcendence, where a whimsical start morphs into another explosion of contemporary and vibrant Thrash and Death Metal, sounding like a hybrid between Exodus and Death. Moreover, Marika takes her insanity to a whole new level, making it the perfect opportunity for cracking your spine in half into the circle pit.

Kill Yourself. brings less than a minute of pulverizing Blackened Thrash Metal by the band, and even with such restricted amount of time in their hands they were capable of delivering a fun and electrifying tune, setting the stage for the full-bodied Predominance, led by the classic shredding by the band’s guitar duo. Furthermore, in this bold and thrilling 6-minute ode to devastation, Thomas not only is a beast on drums but the complexity of his beats is outstanding and, needless to say, Marika once again kicks us in the head with her hellish roars. And an instrumental start warms up the listener for the rabid harsh growls by Marika in the closing song Virus, perhaps the most progressive of all tracks, showcasing thrashier-than-hell, austere lyrics (“Delusional pesticides / Stand asunder / Tributing their gods / Keepers of the luminescent humanoid pollution”) in a display of first-class European Extreme Metal, also bringing gripping guitar lines and an extremely crisp drumming.

You can take a very good and detailed listen at this precious gem of Danish extreme music on Spotify, and follow the band on Facebook and on YouTube to keep up to date with all things Xenoblight. And in order to show your proper support not only to the band but to underground metal in general, you can purchase Procreation directly from the band’s BandCamp page or Big Cartel (as a regular CD version or as a CD + shirt bundle), as well as from iTunes or from Amazon. Xenoblight are set to take the world by storm with their incendiary debut opus, and if you consider yourself a true fan of extreme music you must have such incredible album on your hands. Because in the end, if you don’t buy it, I guess Marika and her henchmen will have to pay you a not-very-pleasant visit, if you know what I’m saying.