Immerse yourself in the debut full-length opus by four Indian metallers who are not afraid to experiment with the new and the unknown, always ready to push their own boundaries in heavy music. 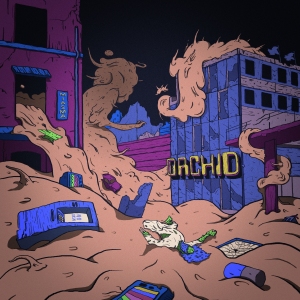 Formed in late 2011 in Bangalore (also known as Bengaluru), the capital of India’s southern Karnataka state, Avantgarde/Progressive Metal entity Orchid is a four-piece band comprised of Kaushal on vocals, Vinay on the guitar, Rahil on bass and Mayur on drums that plays a dense and very distinct blend of Heavy Metal with several other genres and styles such as Progressive Rock, Hardcore and Psychedelic Rock leanings (as well as Mathcore), pushing the boundaries of heavy music in the subcontinental underground and remaining one of the most original bands to emerge from the region.

In 2016, Orchid released their much-awaited self-titled debut EP to critical acclaim with Rolling Stone India calling it “one of the best cult classics of 2016” and “one of the most intriguing metal releases of the year”, inspiring the guys to keep moving forward and keep spreading their distinguished music to all four corners of the earth with their debut full-length opus Miasma, an album tailored for fans of bands like Dillinger Escape Plan, Gorguts and Frank Zappa, among others. Unlike their previous EP, which touched upon themes of techno-surrealism, Miasma is more straightforward with sociopolitical themes, with the artwork, done by the band’s own drummer through Copycat, containing elements from every song on the album.

An enraged scream by Kaushal kicks off the low-tuned, sluggish and heavy-as-hell opening track Obsolescence, with Vinay delivering lancinating riffs while Mayur brings tons of intricacy and dementia to the musicality with his beats, remaining crazy, vibrant and unique from start to finish, whereas in Solipsist we’re treated to two and a half minutes of top-notch Progressive Metal where Kaushal growls and roars manically while Vinay and Rahil give a lesson in progressiveness and heaviness with their stringed weapons. Then we have Master Supreme, a short and sweet headbanging tune led by the crushing drums by Mayur, bringing to our avid ears the most insane elements from Progressive and Groove Metal. “The song is about the pervasive influence and the growing epidemic of gurus/godmen and their cults in Indian society as well as abroad. Religion and spirituality is the biggest scam in the world; and because we live in India, we have a front-row seat to the circus,” commented the band about this austere and captivating song.

After the shortest song of the album, it’s time for the longest one, titled Dead End, offering seven minutes of insanity, rage and eccentricity. In other words, a full-bodied sonic extravaganza full of breaks and variations, not to mention the beautiful Jazz-inspired passage featuring guest Aadarsh Subramaniam and his old school keyboard solo, building an instant bridge to the also pulverizing Identoid, where Rahil extracts truly thunderous roars from his bass while Mayur and Kaushal “duel” to see who’s the most aggressive and demented one, maintaining the album at a high level of ferocity and intricacy. Following such fun tune we have Sugar Pill, showcasing the most progressive of all starts but quickly morphing into a sonic onrush of crisp guitar riffs, Hardcore-inspired drums and raspy growls, fading into a very alternative and sluggish outro, before Zero-Sum Game comes crushing like a thunderbolt, already beginning in full force and bringing a violent Kaushal on vocals, while Vinay keeps firing his classic and slashing guitar lines in a lesson in modern-day Progressive Metal with Avantgarde Metal and Mathcore nuances. Lastly the band offers us all Disassembly Line, not as vibrant and crushing as all previous songs but still a good sample of all the madness the quartet can blast through their music, with highlights to the once again amazing job done by Mayur on drums.

In a nutshell, the guys form Orchid were able to condense all their skills, influences and rage in a very intricate and solid way throughout Miasma, placing their brand new album as a fresh option for fans of heavy music who are always in pursuit of bands that think outside the box and that are not afraid to experiment with the most distinct music styles and genres. Having said that, what are you waiting for to show your support to those Bangalore-based metallers? Go check what they’re up to on Facebook, subscribe to their YouTube channel for more of their music, and purchase Miasma directly from their BandCamp page as well as from Instamojo. I bet you’ve never thought metal music made in India could sound so insane and eccentric like this, right?