A contrast made of light and rage in the form of an action-packed album of trance music and Melodic Death Metal. 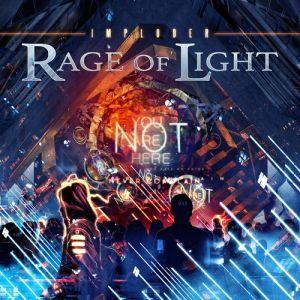 A contrast made of light and rage. That’s exactly what you’re going to get in Imploder, the debut full-length album by Swiss Electronic Groove Metal unity Rage Of Light, the brainchild of vocalist and keyboardist Jonathan Pellet, known for his past works with Symphonic Power Metal band Trophallaxy/Dysrider. Offering a hybrid of trance and Melodic Death Metal, a unique combination of sounds that can be labeled as “Trance Metal”, Rage Of Light will stimulate all your senses with their brand new opus, showing why the multi-talented Jonathan, together with the gorgeous Melissa Bonny (Evenmore, Warkings, Ad Infinitum) on lead vocals and the talented Noé Schüpbach on guitars and bass, are more than ready to conquer the world of heavy music with their creativity, electricity and, of course, a lot of rage.

Jonathan came up with the idea to create a fusion of trance and metal music in 2007, but due to being busy with other projects it took almost a decade for the idea to fully bear fruit. Finally, in 2015, he recruited Melissa and Noé to complete the band, releasing in 2016 their debut five-track EP Chasing a Reflection, followed by a few very interesting singles in 2017 and 2018 including cover versions for Amon Amarth’s battle hymn “Twilight Of The Thunder God” and Lady Gaga’s hit “Judas”. After receiving very positive feedback from fans and critics from all over the world through the years, it’s time now in 2019 for Rage Of Light to reach new heights with Imploder, featuring a modern artwork by Brazilian artist Gustavo Sazes, cellist Joëlle “Jo” Graz (Trophallaxy/Dysrider) as a very special guest musician and, above all, three superb musicians who perfectly represent the union of endless talent and a deep passion for music.

The very atmospheric and entrancing intro Light captivates our senses from the very first second, dragging us to Rage Of Light’s lair of heavy music in Enraged, where the trio begins distilling their refined techniques and ethereal sounds, with Melissa’s hypnotizing vocals matching flawlessly with the song’s epic ambience and crushing beats, not to mention Noé’s amazing guitar solo as the icing on the cake. Following such powerful start, keep banging your head to Melissa, Jonathan and Noé to the heavy-as-hell Fallen, a beautiful fusion of modern-day Melodic Death Metal with trance music, or in other words, a rebellious hymn by Rage Of Light led by Jonathan’s whimsical keys and synths, all complemented by his own rabid growls. And in their 2018 single I Can, I Will we’re treated to a more frantic and electrified version of their Trance Metal, with both Melissa and Jonathan kicking some serious ass with their powerful roars, giving life to the song’s poetic lyrics (“My eyes drag me down / When I look around and see what I’m not / Is there, anywhere, a stairway to the top? / Watch me, never again / Will I look down and feel this pain / Cause now, step by step I start to climb and leave these cries behind”). 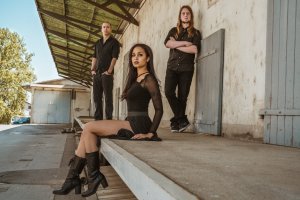 Experimenting even more with electronic and eccentric sounds, the band offers our ears another dancing fusion of 90’s trance with Heavy Metal infused with Symphonic Metal nuances in Away With You, where it’s quite impossible to stand still to its enfolding rhythm, while In The Shadow is another solid composition featuring classic beats and riffs mixed with the band’s trademark modernity (it falls flat after a while, though), with Melissa stealing the spotlight once again with her unique voice. Then the gentle and potent cello by Jo brings a touch of finesse to the beyond fantastic and insurgent Battlefront, with Melissa alternating between her crisp clean vocals and her she-demon roars in what’s probably the most detailed and multi-layered song from the entire album; and get ready for a trance-meets-metal party in the instrumental title-track Imploder, courtesy of Jonathan and Noé, who together generate a dense, mechanized and metallic atmosphere for admirers of the genre. Furthermore, despite the fact the drums in the entire album are programmed, they still sounds very organic, therefore smashing your skull mercilessly.

With lyrics sounding like a blend of cult flicks such as Terminator and Night of the Living Dead (“Our lives, threatened by this viral disease / We thought we could handle this affliction / No cure will stop the infection to spread / Condemned by our evolution”), Mechanicals, also previously released as a single, is a movie score-inspired extravaganza showcasing intricate guitar lines, pounding drums,  tons of insanity and a futuristic vibe in over seven minutes of first-class modern metal music, leaving us completely disoriented before Nothingness closes the regular version of the album, with Jo returning with her somber cello to add her share of melancholy and serenity to Rage Of Light’s vibrant music while Noé brings rage to the overrall result with his riffs, flowing smoothly until its delicate grand finale. And please I beg you to go for the deluxe edition of Imploder, as you’ll be absolutely stunned by the bonus track Twilight Of The Thunder God, their cover version for Amon Amarth’s most powerful tune of all time in my opinion (you can check the original version HERE). I saw somewhere a guy saying this version should be called “Twilight of the Thunder Goddess”, and I agree one hundred percent as Melissa is on her more-than-perfect “beast mode”, resulting in a flawless performance by one of the most versatile singers of the new era of metal music.

If you still can’t imagine how the flammable fusion of such distinct styles like trance and Melodic Death Metal sounds like, you can take a full listen at Imploder on Spotify, but in case you’re already familiar with (and addicted to) Rage Of Light’s breathtaking music, don’t forget to follow Jonathan, Melissa and Noé on Facebook and to purchase your copy of their excellent new album from their own BandCamp page, from the Napalm Records’ webstore (in Europe or in the United States), or from your regular retailers like iTunes and Amazon. In the end, no one knows for sure if Rage Of Light play a heavier-than-usual version of trance music, or a modernized and electronic version of Heavy Metal, and that very interesting contrast is what makes their music so unique and vibrant. That’s the beauty of it, don’t you agree?

Best moments of the album: Fallen, Battlefront, Mechanicals and Twilight Of The Thunder God.

Worst moments of the album: In The Shadow.