Deeply rooted into 70’s and 80’s rock and metal music, three brothers and one sister from Cyprus are unleashing upon us their sensational third full-length album. 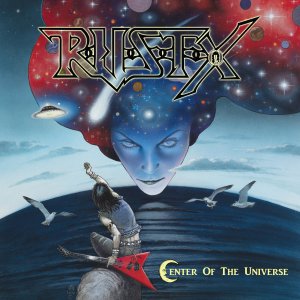 Formed in Agioi Trimithias, a village located in the Nicosia District of Cyprus, in the year of 2003 under the name Flames In Ice, and known as R.U.S.T. from 2004 until 2014, Heavy Metal/Hard Rock four-piece act R.U.S.T.X is ready to take the world of rock and metal by storm once again with their third full-length album entitled Center Of The Universe, bringing to our avid ears truly from-the-heart and no bullshit melodic Heavy Metal with classic rocking passages highly inspired by renowned bands like Judas Priest, Iron Maiden, Warlord, Savatage, Stormwitch and Riot, their absolute passion as one can easily determine with just one listen. Comprised of three brothers and one sister, those being Peter Pan Xanthou on the guitars, George Xanthou on bass, Katerina Xanthou on keyboards and John Xanthou on drums, all four members share the vocal duties in the album, giving it an even more unique taste.

Enthusiastic and passionate about everything they do, their brand new opus will unquestionably convince old school lovers that they do mean serious business, with their outstanding positive energy and originality being accurately reflected by each of the album’s ten magnificent songs deeply rooted into 70’s and 80’s Rock N’ Roll and Heavy Metal. Featuring guest appearances by Paolo Nipa (Dark Quarterer) and Andrea Ramacciotti (Deadly Tide), recorded and mixed at Woodstock Recording Studio in Piombino, Italy by Andrea Ramacciotti, and displaying a magical artwork created by the amazing Chris Achilleos, known for his unique interpretation of stunning amazons, epic dragons and paintings inspired by ancient civilizations and mythology, Center Of The Universe will put you in a trance from start to finish, showing how powerful and gripping the music by R.U.S.T.X can be. “With this album we really pushed ourselves to the limit and the result is like something out of this planet. A comeback to the 70’s and 80’s era of Rock and Metal music that we so much adore,” commented the band, giving you a very good idea of the insane rock n’ roll party that’s about to begin as soon as you hit play.

Uniting the classic rock by AC/DC with the progressiveness of Rush, the Xanthou Brothers and Sister embellish the airwaves with the opening track Defendre Le Rock, showcasing a healthy and beautiful balance between the heavy riffs and piercing solos by Peter and the whimsical keys by Katerina, whereas in Running Man the quartet speeds things up and delivers sheer adrenaline in the form of music, with John taking the lead with his frantic drums while Katerina continues to blast her Deep Purple and Axel Rudi Pell-inspired keys, resulting in a true Cypriot Metal hymn. And in Black Heart the band takes us all to a journey back to the 70’s, blasting high-end Progressive Rock with George shaking the foundations of the earth with his bass. Not only that, it’s definitely very interesting how their vocal lines are always more enraged than the usual Progressive Rock and Metal acts throughout the entire song.

Then an eccentric intro grows in intensity until pure Rock N’ Roll hits us in the head in I Stand To Live, spearheaded by Katerina’s powerful vocals, and again it’s amazing how they can offer so many vocal styles in one album, not to mention their superb job on the guitars and bass (especially the flammable solos by Peter Pan); followed by Endless Skies, an upbeat composition by the band displaying classic Hard Rock infused with 80’s and 90’s elements, as well as numerous breaks and variations, presenting an amazing job done by both George and John with their rumbling instruments. And the sounds of nature and gentle voices ignite the title-track Center Of The Universe, feeling like the overture of a sonic ritual and sounding absolutely unique and experimental. Get ready for over ten minutes of complex guitar lines and classy keys, enfolding vocalizations and all of the band’s other magical sounds and tones until the song’s grand finale, turning it into a must-listen for admirers of the genre.

The electric guitars by Peter Pan dictate the rhythm in the dancing rock tune Widow’s Cry, sounding like a Hybrid between the early days of Nightwish with Doro where Katerina once again steals the spotlight with her gorgeous vocal lines, while Peter Pan’s slashing riffs and solos and George’s Iron Maiden-inspired bass lines are the icing on the cake. In Wake Up, an excellent Progressive Rock extravaganza, they sound like a younger and European version of Rush, bringing forward a fantastic work done by John with his intricate beats, and keys and riffs in total sync that will certainly warm up the listener’s heart and soul. And last but not least, the CD version of the album contains two awesome bonus tracks, starting with the headbanging rock tune Dirty Road, where the entire band breathes fire from their tuneful instruments, and Band On The Run, a sensational cover version of the song by Paul McCartney & Wings released in 1973 (check the original one HERE), where R.U.S.T.X give the song a more progressive and psychedelic vibe.

You can find Center Of The Universe available for a full and detailed listen on Spotify, but of course in order to show your utmost support to this talented family I recommend you purchase your desired version of the album from the band’s own webstore, from the Pitch Black Records’ BandCamp or webstore, and from several other locations such as Saturn.de, Apple Music, Amazon and Discogs. Also, why don’t you give them a shout on their Facebook page and also subscribe to their YouTube channel? Those are excellent ways to keep in touch with what’s certainly one of the best and most exciting bands hailing from Cyprus, and without any doubt the most united and passionate family from the underground Rock N’ Roll scene.

Best moments of the album: Running Man, I Stand To Live, Widow’s Cry and Band On The Run.