Showcasing a multitude of influences and musical variations, this Hard Rock three-piece unity from Wales is ready to rock with their brand new EP. 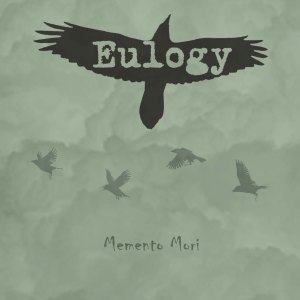 Remember (that you have) to die. This is the meaning of the famous phrase Memento Mori, the title of the brand new EP by Welsh Hard Rock three-piece act Eulogy and the follow-up to their wildly popular EP Back To Life, released in 2017. Performing original music with a dark lyrical twist, Eulogy were formed back in 2017 in Cardiff, Wales by lead singer and bassist Neil Thomas, guitarist Mike Williams and drummer Darran Goodwin, aiming at showcasing a multitude of influences and musical variations, with the four track from their brand new EP being written and refined over a period of five months before being recorded, mixed and mastered at Coda Recordings by Neil Garland. “We wanted to create something heavier and darker while maintaining our melodic sound,” stated Neil Thomas about Memento Mori, featuring the band’s most dynamic writing to date throughout its 18 minutes of classic Hard Rock.

And the band kicks things of with Cross To Bare, a song about losing someone close and dealing with loss, presenting a flammable fusion of the music by classic hard rockers like Motley Crüe with the heaviness of Judas Priest and the Rock N’ Roll by Volbeat. Moreover, Darran dictates the pace with his spot-on beats while Neil fires rage and electricity through his vocals and bass, sounding and feeling like a rockin’ hit from the 80’s, whereas You’ll Die Alone, a song that focuses on the consequences of treating someone badly, is a mid-tempo Hard Rock feast of slashing riffs and tons of melody flowing from Mike’s guitar, while Neil and Darran keep the atmosphere dense and sinister with their respective weapons. Then its time to get faster, heavier and more aggressive in Corvid, dealing with the moment before death when your soul is taken. Led by Mike’s razor-edged riffs and Darran’s trademark beats, this is an awesome option to bang your head nonstop or dance with yourself (especially now while quarantined in your place during the coronavirus pandemic). And closing the EP the power trio fills every single space in the air with their melodious and classic rock music in Blood Red Skies, a song of hope presenting the trademark riffs and soulful solos by Mike while Neil passionately declaims its inspiring lyrics. 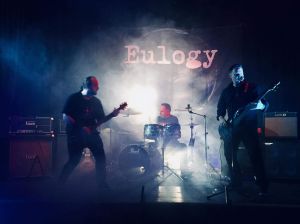 In summary, Memento Mori, available for a full listen on Spotify, not only points to a bright future for those Welsh hard rockers, but it also positions Wales as a very interesting source of old school Hard Rock for admirers of the genre. Hence, don’t forget to show your support to Neil, Mike and Darran by following them on Facebook and on Instagram, by subscribing to their YouTube channel, and above all that, by purchasing your copy of Memento Mori from their official BandCamp page, from CD Baby or from Google Play, helping Eulogy to proudly carry the flag of British Hard Rock wherever they go.

Best moments of the album: Corvid.

Released in 2020 One Eyed Toad Records