Seasoning their psych-doom cauldron with tribal percussion and prog rock arrangements, this American trinity is ready to cast a spell on us with their excellent new album. 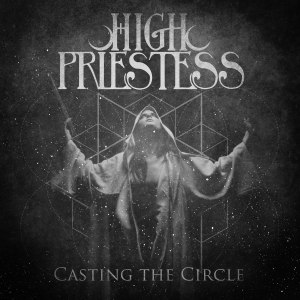 Convoking crushing riffs drenched with lush harmonies and hypnotic eastern themes, Los Angeles-based Doom Metal trinity High Priestess was formed in 2016 by bassist and vocalist Mariana Fiel when she recruited Katie Gilchrest on guitar and vocals and Megan Mullins on drums, crafting a sound that echoes both past and future incarnations of doom and psychedelia since then. After the release of their highly-acclaimed self-titled debut album in 2018, it’s time for High Priestess to captivate our senses once again with their sophomore opus Casting The Circle, featuring a dark and sexy artwork by Jill Colbert at Manfish Inc. and seasoning their psych-doom cauldron with keyboards, tribal percussion, signature harmonies and grandiose prog rock arrangements. “After playing these songs live for many months, we are pleased to have captured them in their definitive recorded versions for the whole world. We honor gods and goddesses, ancestors and spirits from the past, present and future and sing songs of misfortune,” commented Katie Gilchrest herself about the band’s amazing new album.

A tribal, dark mass is about to start in the deep and embracing Casting the Circle, led by Megan’s ritualistic beats while Katie and Mariana begin blasting their enthralling vocal lines in a true psychedelic and doomed manner. Put differently, it’s absolutely impossible not to get hypnotized by their music, which is also the case in the fabulous Erebus, where the trio leans towards the most obscure side of iconic acts like Black Sabbath and Candlemass, but with a delicious feminine touch added to the overall result. It’s almost ten minutes of enfolding passages, crisp riffs and the sluggish beats by Megan, all spiced up by Katie’s astounding, piercing guitar solos, whereas The Hourglass is a Psychedelic and Progressive Rock extravaganza blending the trademark sound from the 70’s with the band’s more contemporary doom, with Katie’s stunning riffs being complemented by the low-tuned bass by Mariana and the classic drums by Megan, not to mention the song’s fiery vocal lines. 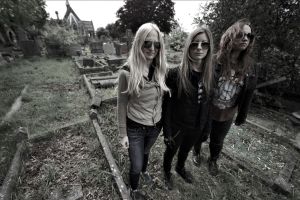 Then it’s time to surrender to the most Stygian side of life in Invocation, offering our avid ears over 17 minutes of ethereal and somber passages led by Katie’s primeval, mesmerizing riffs while Mariana and Megan dictate the rhythm with their thunderous but delicate instruments, summoning the prince of darkness with their scorching Doom Metal. Flowing like an arrow on fire through the night and getting heavier and more imposing halfway through it, the song remains tribal and dense until its demolishing grand finale, with Katie heightening our senses with her cryptic organ keys. And lastly we have Ave Satanas, an ethereal and obscure outro by the trio where their somber vocalizations will drag you into their sinister lair in the name of Satan (which in the case of High Priestess is a beyond awesome opportunity for any metalhead, of course).

The circle of what the band itself likes to call “Heavy-Psych Doom” has been cast by Katie, Mariana and Megan in their newborn opus, and in order to join those three undeniably talented women in their quest for such unique style of heavy music simply follow them on Facebook and on Instagram, and grab your copy of Casting The Circle from Ripple Music’s BandCamp page or webstore (US and Europe), as well as from Amazon. The high priestesses of heavy and lustful Doom Metal are among us to stay, and as they conjure each and every one of us to become part of their devilish kingdom, there’s only one question left, and it’s indeed a very simple one. Who are we to say no to such distinguished and dexterous triumvirate of doom?

Best moments of the album: Erebus and The Hourglass.